To Live and Drive in LA 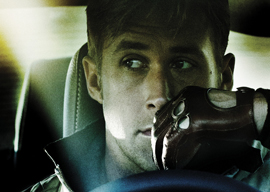 Whatever happened to the femme fatale? From Mary Astor in The Maltese Falcon and Barbara Stanwyck in Double Indemnity to Kathleen Turner in Body Heat and Linda Fiorentino in The Last Seduction, the silky seductress who lures some poor sap into her web of betrayal was the central element of the noir genre of moody urban crime films. But today, female characters tend to be either Butt-Kicking Babes or Passive Victims.

Noir is still around, though, as vividly demonstrated by Drive, an artsy, retro-1980s thriller fueled by a superlative Ryan Gosling performance as that traditional popcorn-movie favorite, the hard man with a heart of gold.

Gosling, who was robbed of a Best Actor nomination for last year’s indie standout Blue Valentine, is perhaps the most promising male movie star since Leonardo DiCaprio. Here he plays a tight-lipped auto mechanic who lives quietly in a Philip Marloweish apartment building downtown in gentrifying Echo Park. How can he afford that? Well, he’s also a Hollywood stunt driver and he moonlights as the best getaway driver on LA’s mean streets.

“Whatever happened to the femme fatale?”

Then this omni-competent loner falls hard for the adorable single mom next door. But she turns out to be not so single, as she announces that her Latino husband is coming home from prison. So Gosling will have to battle Mulligan’s gangbanger husband, right?

Not in Drive’s Los Angeles, where everybody is improbably classier than in the real one. The mechanic is Canadian, while the felon’s wife is played by the posh, fluttery English actress Carey Mulligan (who will portray Daisy opposite DiCaprio’s Gatsby in an upcoming Fitzgerald adaptation). And the hooker assigned to sprint off with the money in a pawn-shop robbery that goes brutally awry is Christina Hendricks, Mad Men’s redheaded office manageress (even though that top-heavy actress is famously built more for comfort than for speed).

And the gangsters—Albert Brooks and Ron Perlman—are Jewish. Brooks, who was the voice of the worried father fish in Finding Nemo (and whose original name was, honest to God, Albert Einstein), plays a crime lord who thinks himself a mensch. He’s depressed and a little resentful that people keep forcing him to kill them. (“Look what you made me do.”)

By the way, what’s the deal with Perlman’s head? Was it always so gigantic, or has the sexagenarian action-movie actor been hitting the human growth hormone like Barry Bonds?