To the Future, and the Past 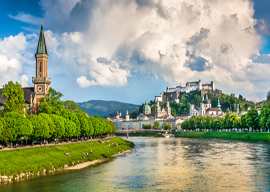 SCHLOSS WOLFSEGG—I was watching two very old men slowly approaching the open doors of the Pilatus airplane I was leaning up against when it dawned on me that they were the pilots who were about to fly me to my daughter’s wedding. The one called Willy extended his hand; so did Alex, a short little guy who looked in his 90s. “Ah, Herr tennis man,” he said, and then mentioned a match I had won more than fifty years ago when on the tennis circuit, “wie geht es?” Willy then told me that Alex had retired from flying Airbuses thirty years before and now flew as insurance in case the pilot dropped dead en route. I could not care less. Pilatus is my favorite airplane, with six wide seats and one just behind the two pilots. With a Pratt & Whitney engine of 1,700 horsepower, it cruises silently at 250 knots and can fly without refueling for close to 2,000 klicks. It can land on a postage stamp, and there are 1,500 of them buzzing around the globe.

We left Saanen, a private airport near Gstaad, and arrived in Salzburg one hour and fifteen minutes later. Alexandra (the mother of my children) had brought all sorts of goodies along, but so had the two pilots, so by the time we landed, the champagne was starting to take effect. My beautiful daughter, the future Gräfin Saint Julien, was waiting for us on her last day as plain Miss Taki.

My first thought at seeing the white 1,000-year-old castle that will be her home from now on was a simple one: At least she won’t be mugged by some thug called Muhammad as she was in London, in SW10, and where her local MP, one Greg Hands, showed as much interest in her case as I do when local Burundi elections are mentioned. (The fuzz were polite but understaffed, and there was nothing they could do; the area continues to be terrorized by council estate tenants.) So, there was this huge white castle on a hill surrounded by thick woods and overlooking a hamlet by the same name; the castle makes Badminton House look like a semidetached near Reading. (More about Badminton in two weeks, if I survive the upcoming party.)

“The setting and the place were straight out of The Sound of Music, without the vulgarity of the von Trapps.”

My son-in-law, Count Edouardo Saint Julien-Wallsee, is an Austrian nobleman whose family and title go back close to 900 years. (Louis IX rewarded the family after the Second Crusade.) He and his family and I get along like a house on fire, and on the night of the wedding we stayed up far too late and got stinko. Edo is the head of the household, and I met all his close friends the first night at the schloss. Although I hate to sound corny, I have never met such really old-fashioned gentlemen in all my years of traveling the globe. They were all young, all titled, with beautiful wives and beautiful blond children, and beautiful manners. In fact, the setting and the place were straight out of The Sound of Music, without the vulgarity of the von Trapps.

The pomp and pageantry of a long-ago Austrian empire were evoked in the castle’s chapel as Pastor Himmelbauer (“heaven builder”) presided over my girl’s marriage to Edo, with a large and beautifully dressed oompah band playing their hearts out afterward in the courtyard. Incidentally, in the village church the next day—my wife and daughter attending, as the bridegroom and I were much too hungover—the place of worship was packed, people dressed to the nines in traditional costumes, the chorus singing heavenly, and the twenty-man oompah band marching in step outside. There were even plumed helmets worn by old officers—Strauss’ “Radetzky March” was the only thing missing. What I miss the most, however, is the swagger that went with being an imperial officer of the Austro-Hungarian Empire.

In one of the numerous salons I noticed two portraits of two very good-looking young officers in their cavalry uniforms, Edo’s great-uncles. They were both killed in 1918 in Bessarabia, dead at ages 23 and 21. Their nieces, now aged but wonderfully friendly and funny, came for the wedding.

The schloss, about 35 miles east of Salzburg, is surrounded by forests of tall fir, pine, and spruce trees, the Upper Austrian Voralpenland mountains in the distance. It felt a bit like Lampedusa land, a time warp of elegance and good manners and dress of long ago. As human waves of African and Middle Eastern immigrants wash ashore daily, this part of Austria is still resisting, just. But in Wolfie’s capital, Salzburg, its baroque architecture is still the best preserved anywhere. I noticed lots of refugees looking glum and Salieri-like. Worse, however, are the tourists, the bane of our time, eating and drinking and clogging up those beautiful streets where Wolfie was born. God, how I loathe the modern world and its modern non-manners, the lack of style, the horrors of modern music and modern mores. I just might move in here for good, but at last we’ve come full circle. My paternal ancestors came from these parts, I married a German whose family went to Austria in the 18th century, and now my daughter is married to an Austrian. I couldn’t be happier. Auf Wiedersehen, meine Lieben.