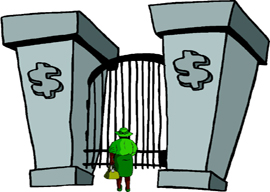 The old libertarian battle cry came to mind when the news hit, two weeks ago, that Cyprus was about to confiscate 7 percent of all the insured deposits in the island’s two biggest banks. Nicosia also planned to siphon off 10 percent of uninsured deposits, those above 100,000 euros ($130,000), and use that cash as well to finance Cyprus’ share of a eurozone bailout.

The reaction was so scalding that the regime had to back off raiding insured deposits. The little people of Cyprus were spared. Not so the big depositors, among whom are Cypriot entrepreneurs and thousands of Russians. Their 10 percent “haircut” has now become an amputation.

Large depositors in the Bank of Cyprus, the island’s largest, face confiscation of 60 percent of their capital. In Laika, the No. 2 bank, which is to be euthanized, the large depositors face losses of up to 80 percent. All of Laika’s bondholders will be wiped out, and all employees let go.

“Those Russian depositors wiped out in the Cyprus slaughter may not have died in vain.”

When the Cypriot banks opened again on March 28, capital controls had been imposed. Only 300 euros may be withdrawn daily from a bank. Folks leaving Cyprus may take only 1,000 euros.

What has this crisis to do with us? More than we might imagine.

Last week, Jeroen Dijsselbloem, the Dutch chairman of the eurozone’s finance ministers, let the cat out of the bag. The bail-in of big depositors and bondholders, who are being forced to eat a huge slice of the Cypriot bailout, may serve as a model for future bailouts.

The hot money that came into Cyprus, said Dijsselbloem, either to be laundered or hidden from taxes, or to seek a higher rate of return, was wagered money. And when bets go bad, government is not obligated to made the gamblers whole again.

The former eurozone policy of protecting senior bondholders and uninsured depositors, said the Dutch conservative, is history. If money comes from Northern Europe to bail out the Club Med, Club Med bank bondholders and big depositors will be “bailed in.”

Translation: Uninsured savings in Spain, Italy and Slovenia may be raided and bondholders liquidated to bail out their troubled banks. To Malta, Luxembourg, Latvia and other banking centers, the handwriting is on the wall: What happened in Cyprus could happen here.

So great was the shock from Dijsselbloem’s remarks, by day’s end he was backtracking, declaring Cyprus was not a template but a “specific case” with unique circumstances.

None too soon. For as Barclay’s bank noted, “The decision to bail in senior bank debt and large depositors will likely have a price impact on equity and credit instruments of those euro area banks that are perceived as the weakest.”