Tom Stoppard: Baffling the Innocent Since 1966 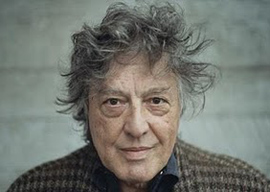 Tom Stoppard’s remarkable career stands as a puzzling rebuke to cynicism about show biz. Sure, audience-pandering, trend-surfing, and propagandizing can explain the vast majority of what the entertainment industry sets before us. Then how can we account for Stoppard’s endless success? Sir Tom has appealed to everyone’s best instincts for most of the last half-century, and he’s been handsomely rewarded for it.

In the 45 years since Rosencrantz and Guildenstern Are Dead debuted in 1966, Stoppard has turned out a string of plays of high to superlative quality. Thirteen have made it from London to Broadway, and four have won the Tony Award for Best Play. Stoppard’s career likely peaked at age 56 with 1993’s Arcadia. It’s a tragicomedy about chaos theory, the birth of Romanticism, landscape architecture, and, like most Stoppard plays, much more. A revival of Arcadia is now in previews at Broadway’s Ethel Barrymore Theatre. It stars Billy Crudup, America’s leading Stoppard interpreter.

By now, Stoppard, who still wears his hair like his friend Mick Jagger, has outwritten or outlived all his rivals to earn the title of today’s preeminent playwright. In a profession where the best tend to burn out fast, the 27 years between Stoppard’s best-known play, Rosencrantz and Guildenstern, and his best play, Arcadia, demonstrates how high his career arc soared.

“By my count, eleven of his plays have been anti-communist or pro-conservative.”

Stoppard’s popularity can”t be attributed to trend-mongering, because his themes range from the idiosyncratic to the unpopular, such as honoring anti-communist Slavs (as in his most recent play Rock “n” Roll, a tribute to Czech dissidents that sprawls from 1968’s Soviet reoccupation to the fall of the Berlin Wall). By my count, eleven of his plays have been anti-communist or pro-conservative.

Has any playwright since Shakespeare baffled more innocent audience members?

I”m impressed and grateful that the theater world continues to mount Stoppard productions and that playgoers faithfully buy tickets, even if most people stagger out afterward with a dazed expression that says: “I think…that was really good. But what the hell was it about?”