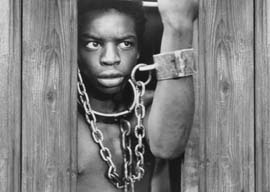 The factually challenged (and largely plagiarized) 1977 TV miniseries Roots had an undeniable influence on how millions of Americans, black and white, view the era of slavery. A standout moment in this well-made piece of historical hooey occurs shortly after Kunta Kinte, the proud African (is there any other kind?), is brought to America and sold into slavery. Kinte is strung up and whipped within an inch of his life by a cruel overseer who is determined to force the kidnapped Mandinka to adopt his “slave name,” Toby. Again and again, the whip cracks, flaying the young warrior’s back. “Toby! Your name is Toby!” After what seems like an eternity of abuse, Kinte finally gives in. “Toby,” he whispers in defeat. “My name is Toby.” He’s cut down and left in the care of wise house negro Fiddler, who cradles the boy, promising him that even though everything seems bleak now, another day, a better day”the day of the black man“will come.

PBS called this scene a “transcendent moment” in American television, and I agree. This was not a scene aimed at the whites who were watching the program in record numbers, but at blacks. This was a promise for the future. Fiddler was speaking to black America: Just bide your time, endure the hardships, and soon enough, “white power” will come to an end and the black man will finally have his day.

Fiddler can be excused his limited worldview. After all, at the time that scene was set, the U.S. didn”t even have a southern border with Mexico yet. In fact, the screenwriters of the miniseries can themselves be excused for seeing the future in the limited color spectrum of black and white. As someone who grew up in Los Angeles in the 1970s, I can attest to the fact that no one gave Hispanics (or “Latinos,” “Chicanos,” etc.) much thought. It was a black-and-white world, even here in the Southwest. Perhaps the best example I can provide of the sheer lack of thought given to Hispanics is the movie Blade Runner. In Ridley Scott’s 1982 “visionary masterpiece,” the L.A. of 2019 is envisioned as a city in which the only large minority group is Asian. In what Brian Locke in the Arizona Quarterly described as an “emphatically Asian Los Angeles,” Chinese and Japanese folks inhabit the L.A. ghettos, slums, restaurant kitchens, and bazaars, with nary a Spanish speaker in sight. Even the character played by Edward James Olmos, the film’s sole actor of Mexican descent, speaks a gutter version of Japanese.

“Hispanics are unmoved by Black Lives Matter guilt-tripping, and unafraid of confrontation.”

That’s what people in 1982 thought L.A. would be like in 2019. Seriously. Few people back then watched Blade Runner and thought, “But where are the Mexicans? Where’s the Spanish?” South-of-the-border immigration was not yet a major national issue.

How times have changed.

Needless to say, Kunta Kinte’s promised “black future” isn”t gonna happen. Numerically, Hispanics are now the dominant racial/ethnic group nationally, and here in Southern Cal, all of the cities that were supposed to represent that bright future of black autonomy, like Watts (now 61% Latino) and Compton (65% Latino), are solidly brown, and only getting more so. I”m hardly the first one to write about this. Most people are generally aware of the losing war black Americans are fighting for jobs and turf all across the country. But a fascinating news story out of Missouri last month”completely ignored by the national media”illustrates, for better or worse, just how bad the situation is for black Americans still banking on Fiddler’s promise.

Juan Meraz is the assistant vice president for multicultural services at Missouri State University. He’s also the school’s highest-ranking Latino official. And he really, really doesn”t care for black folks. According to complaints from students“complaints disputed by neither the university nor Meraz himself”the “diversity officer” repeatedly makes “disparaging and discriminatory remarks” toward black people in general, and black students specifically. He apparently cautions the Hispanic students he mentors to avoid hanging out on campus at areas known to be frequented by blacks, and he regularly stresses to his female Hispanic mentees the importance of not dating black men.

He allegedly told one female mentee that if he ever caught her dating a black man, he”d inform her parents. That particular mentee recorded a conversation with Meraz in which he stated, among other things, that MSU’s Multicultural Resource Center is “a hostile area to anyone who is not black,” and that black students “look at me like I owe them money, and I don”t owe them shit,” adding, “Everybody is “Oh, well, black lives matter””I understand that. What about everybody else?”

In late February, after hearing all of the evidence against Meraz, the university responded by doing…ready for this? Nothing. The university declined to take action, even after acknowledging that the complaints against Meraz were credible. Meraz issued a tepid apology for any “unprofessional language” he may have used, the Hispanic mentee who recorded him withdrew her complaint, and the university declared the matter closed.

Did black students threaten to protest? Damn right, they did. And no one cared. Meraz kept his job, and the black malcontents were dismissed as though they barely existed.

Viewed in light of recent college protests and resignations, this story is really quite remarkable. In December, a white lecturer at Yale was forced to resign after sending an email encouraging the university to allow students the room to be creative in their choice of Halloween costumes. Black students protested and wailed and disrupted campus life for days because apparently Halloween costumes need to be regulated (who knew?). In November, two white officials (the president and the chancellor) at the University of Missouri were forced to resign when one of them refused to get out of his convertible during the school’s homecoming procession after a group of black students blockaded the car demanding an “end to racism,” which apparently would have been brought about had the selfish white man merely exited his vehicle.