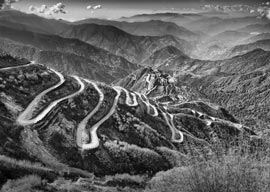 You can”t miss the signs, despite our leaders” reassuring statements, which would have us believe everything is just fine when it is not. The Fed’s too spooked to move on interest rates, supertankers float in traffic jams in the Gulf of Mexico, and 487 million barrels of crude oil are presently sitting unused in U.S. inventories. The Baltic Dry Shipping Index, a barometer of world trade volumes, has “reached an all-time low of 504 [points].” Much proof that our world order is ending is out there. China, of course, is cited as the major reason for this failure.

If only that were all China was getting up to.

For all its newly gained macroeconomic influence, China has more pressing, permanent, and tangible projects to be getting on with”while we in the West bemoan the Chinese economic growth correction like the stopping of a gravy train. China is, in fact, engaged upon a more lasting and civilization-changing process too long-term to interest the Western media. While newspeople sensationalize a game of global hegemony you could call “China vs. USA,” the real action is happening far from Shanghai or New York. The money, intent, and planning behind this historic process we”re about to explore is near-entirely Chinese, and if you fear China as a world hegemon, then what follows may provide you with ammunition for fear-spreading as well as relief. This is due to the fact that, regarding America’s supposed fall from global hegemon, any influence lost by the U.S. accrues not solely to China. More than two major poles of global power exist”America and China”although the Pentagon lists the threats to our national security as fourfold: Russia, China, Iran, and North Korea.

The reality is: Something far more exciting than China’s overseas financial colonization is happening. It is the renaissance of the Silk Road as the predominant world economic hub of the future. A New Great Game is under way as a newly empowered East looks West.

The Central Asian economy is coming back to life. This will mean little to you now, yet if you read on you will see how that fact may overturn the balance of power in our world. This economy is resurrecting itself quite naturally, trade in this region continuing as it has done for a thousand years. The region is an ancient geopolitical alignment, yet it’s also the future, no less: requiring fiber optics, dozens of pipelines, new ports; connecting to one another…and a long subway connecting the Central Chinese city of Xi”an to Berlin (if you believe rumors).

The projects are bold and self-financed. China’s building a high-speed rail connection between Asia and Europe, and its construction is well advanced, although we hear little about this in the U.K. Estimated date of completion: 2025. Western citizens are often unaware of the many infrastructural developments that China pursues apace across the world. Some of them may even affect you. China’s Infrastructure Bank is responsible for developing many such propositions in 48 countries”including the “stans“ of Central Asia.

Remember the BRICS countries, those that fell out of favor in the past few years? Well, they”re part of this economic superhighway too.

The reemergence of a Eurasia, projected for 2025, is driven by a triumvirate of Iran, China, and Russia”all powerful nations surrounding a Central Asian hub. Iran itself is set to be the “central node of the New Silk Road,” says Russia Today reporter Pepe Escobar. This Asia-watching journalist believes the Asian G8 will shortly become the G9 with the inclusion of Iran “in 1 to 2 years.” Escobar deploys collocations like the “Global South” to imply as-yet-unaligned movements that may still come into being. The main show is indisputably Central Asia, however. And the Chinese”with Russian and Iranian assistance”are the show masters.

According to Mr. Escobar, the world order is most definitely shifting”only we in the West are unaware of it. Stock phrases brandished by our media like “the international community” have lost their meaning for most, he believes. No more “international community” exists, not in a multilateral and interdisciplinary world. That phrase neatly referred to NATO countries once, but no longer. Why? Because the rest of the world has lost respect for the organization, says Escobar. “These people think the West is Satan.”

Nonetheless, President Obama had the smarts to break bread with Iran’s new regime, not least because it means adding an educated, sophisticated population of 80 million Iranians to the global marketplace. This Persian volte-face will allow the U.S. to participate in the growing trade generated by the Silk Road’s central node (Iran), along with everybody else. An attractive precept of the Silk Road is the authentic reality that trade there is open to anyone, with anyone, from anywhere, regardless of religious allegiances or any other divisions.

And trade has been active in this economic belt for a millennium: nothing new. It’s just that it’s expanding fast again right now, and Eurasia may conceivably become the center of the economic world sometime in the future”in the way you now see the USA as such. All these screeds about the end of Western hegemony or the fall of America as Superpower No. 1″heard frequently in the rest of the world”may be confirmed not by China itself, but by a Central Asian economic bloc whose infrastructure was designed and built by China.

After its discussions with Iran, an occasion when the “blueprint” for the New Silk Road was allegedly drafted, China’s government now encourages its people to “go West” toward Xinjiang (an autonomous region in the country’s northwest). There it is hoped they will settle, like pioneers in the American West of the 19th century, with support from their government to boot.

Escobar says Europe was merely a bystander at the Iranian nuclear treaty. Novel economic forces are under way, however, and they are driving the world economy, invisibly or not. Eclipsing the once-mighty European Union, for good or bad, too”maybe? If you think it’s an exaggeration, look at this. One of the 5″6 stans that constitute Eurasia today, Turkmenistan could one day replace Russia’s Gazprom in providing gas for Europe”rescuing the E.U. from its total dependence on Russia. Talks have begun. Escobar describes the Iran treaty as significant on several planes not shared with the media, saying it was “really a blueprint for a New Silk Road.” Perhaps the most striking proof of this nascent world order comes from the fact that it was China, and no other nation, that called the Iran treaty.

The Silk Road was always based on a dynamic of peaceful commerce”as opposed to politics of antagonism or threats of militarism, of which the U.S. and NATO stand accused by many in the Global South particularly. Another groundbreaking evolution of the world order, already accepting military noninvolvement (!), is the apparent absence of any “financial capitalism” as an erstwhile sponsor for the revival of Central Asia’s economy. Which I take to mean the absence of corporate finance in favor of old-fashioned trade? It is unclear, but it may imply a stance against the financialization of…everything?

The original Silk Road was founded by Emperor Ch”ang Ch”un, and the route spread cultures”principally Buddhism: a way of life (not a religion, as it is often misunderstood in the West)”as well as distributed commercial goods. The route disintegrated under Mongol management around 1,000 years ago, before its rediscovery by 19th-century German and other European traders and diplomats…in a famous history known as “The Great Game.” The name comes from the point that the world’s bigger powers have perennially (and unsuccessfully) fought over this same geographic nexus. The New Great Game commenced roughly when the Soviet Union collapsed, releasing its Eurasian stans from the bondage of Communism and into the free market’s open arms.

In May 2014, China’s state-owned Xinhua news agency clarified the intended route of the New Silk Road. This engineering marvel will run from Xi”an in Central China toward Kazakhstan, where it switches to a southwest route across Central Asia to northern Iran before redirecting west again through Iraq, Syria, and Turkey. From Istanbul it crosses the Bosphorus and runs northwest through Europe, from Bulgaria to Germany and ultimately to Rotterdam. From Rotterdam the route heads south to Venice, Italy”where it meets up with the Maritime Silk Road. (We have no time even to touch on the Maritime Silk Road, also under construction as you read this.)