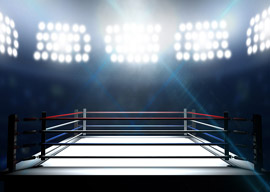 When I was a small boy I could name all of boxing’s world champions, and I guess that anyone who followed the sport could do likewise. This was back in the immediate postwar years, and even people with little interest in what sportswriters still called “the fistic art” knew that Joe Louis was the heavyweight champ, as he had been since 1937. One or two titles changed hands. At featherweight the great Willie Pep, master of defensive boxing, lost his crown to Sandy Saddler and then regained it, and the middleweight division was hotly contested, with Tony Zale, Rocky Graziano, Marcel Cerdan, and Jake LaMotta all holding the title before LaMotta, the “Raging Bull,” lost it to the greatest pound-for-pound fighter of them all, Sugar Ray Robinson. Nevertheless, if you kept your eye on the sports pages, you were likely to know who was the champion in each weight at any given time. It wasn”t that difficult.

That was then. Things are very different now. There’s a P.G. Wodehouse story in which someone says of a movie fan that she can even tell you how many wives Artie Shaw has had, and that’s more than Artie Shaw could say himself”or words to that effect. The same goes for boxing today. When I was an 8-year-old I could have told you who was champ in each weight division. As I say, this wasn”t that hard. There were, after all, only eight weights, consequently only eight champions, because there was, almost always, general agreement about who held the crown.

Well, those were the days before we suffered galloping inflation, when a dollar was still worth a dollar and when in answer to a questionnaire as to the best or necessary annual income for a writer, George Orwell plumped, as I recall, for £600. Yes, £600 a year; any writer today might find it hard to manage on £600 a week if he were living in London. So it’s not surprising that inflation has hit boxing, and reduced it to absurdity.

I opened the paper today and read that a chap from Liverpool, Tony Bellew, knocked out a Congolese southpaw called Ilunga Makabu to become Britain’s thirteenth world champion. That’s not the thirteenth this century”we used to think it remarkable if we had one in a decade. No, it’s our thirteenth current reigning one. This is crazy; how come?

“People lose confidence in a devalued currency. The same rule applies in sport.”

Well, as I say, it’s that boxing has suffered from inflation. There used to be only eight weight divisions: heavyweight, light heavyweight (which was sometimes called cruiserweight), middleweight, welterweight, lightweight, featherweight, bantamweight, and flyweight. Now there are seventeen. Yes, seventeen; that’s not a misprint. You have, for instance, super middleweight, middleweight, light middleweight. That’s one division stretched out into three. The tiny dancing flyweight boys now have a chance likewise, by shedding or adding a couple of pounds, to compete at three weights: super, standard, and light. Crazy, especially when you think that there used to be only a six-pound difference between flyweight (8 stone) and bantamweight (8 stone 6).

Only one of the new weight divisions makes sense. This is the introduction of an official cruiserweight division (under 200 pounds) between heavyweight and light heavyweight. This makes sense because heavyweights are now much bigger and heavier than they used to be. In his prime Joe Louis fought at under 14 stone, which would make him a cruiserweight now. The great champion of the “20s, Jack Dempsey, and the unbeaten Rocky Marciano in the “50s had a fighting weight of about thirteen and a half stone. There were occasionally giants like Jess Willard, from whom Dempsey won the title, and Italy’s Primo Carnera, affectionately known as the “Ambling Alp,” but they were exceptional. They would be standard for heavyweights today. Over the past decade the division was dominated by the huge Ukrainian Klitschko brothers, till the English giant Tyson Fury, who stands at least 6 foot 9 and weighs more than eighteen stone, beat the long-reigning Vladimir Klitschko on points in a dull fight. Fury’s English rival, the 2012 Olympic champion Anthony Joshua, has a fighting weight of more than seventeen stone. Marciano would have been giving away at least four stone to any of these chaps, and so would Muhammad Ali when, as Cassius Clay, he first won the heavyweight title in 1964.

The rise in the number of divisions is only one of the inflationary changes. There are now four organizations, four boxing boards, which stage championship bouts and recognize champions: the WBC (World Boxing Council), the WBA (World Boxing Association), the IBF (International Boxing Federation), and the WBO (World Boxing Organization). Theoretically, therefore, with seventeen divisions and the four boards, there could at any time be no fewer than sixty-eight world champions. How stupid can you get? Fortunately there aren”t quite so many because some boxers hold more than one “world” title. Nevertheless, by my count there are today a mere fifty-eight holders of world titles (a couple of titles are vacant). This is absurd”and explains why Britain can claim to have thirteen world champs, which is considerably more than the number who held a crown, however briefly, in the first twenty years in which I followed the “noble art.”

Monetary inflation, as we all know, destroys the value of a nation’s currency. The most infamous example of this is what happened in the Weimar Republic”Germany in the 1920s”a time when if you had any sense you paid for your restaurant lunch before eating it because if you waited to have finished your meal before asking for the bill, it would cost you 50,000 marks more. But, less dramatically, this sort of inflation has happened all over the Western world. I take an old Penguin from the shelf behind me”the British edition of Hemingway’s Paris memoir A Moveable Feast, published in 1964, and see that it cost three shillings and six pence, or seventeen and a half pence in today’s decimal currency (except that, on account of inflation, we long ago abolished the halfpenny coin). The trade paperback of my own last novel costs £12. If you want a lively account of how the U.S. government and Federal Reserve Bank have between them devalued, and therefore debauched, the dollar, I recommend that you read Lionel Shriver’s splendidly entertaining and intellectually chilling new novel, The Mandibles.