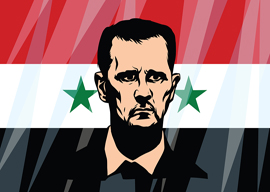 Let’s keep out of war in Syria.

The BBC 5 o’clock news started with the most extraordinary and chilling words I have heard in fifty years of watching or listening to the BBC News.

“Russia and America edge closer to war over Syria.”

Previously the most chilling words I had heard were:

I should say that I see virtually no possibility of fighting between America and Russia, but virtually is not absolutely.

I was opposed to a strike on Syria in 2013 but am thinking through the arguments this time. The 2017 strike by the Americans seemed worryingly like the start of a U.S. intervention but in fact had no consequences apart from showing that Trump was not a Russian stooge, repairing the damage done to U.S. prestige caused when Mr. Obama did nothing in 2013 and killing some innocent people.

If Assad is responsible for using chemical weapons this time, the 2017 strike did not deter him.

I am very reluctant to think this is a trick by Western governments, but is it a false-flag operation by others unknown? The Saudis?

How can we know?

But we do know this.

“I see virtually no possibility of fighting between America and Russia, but virtually is not absolutely.”

It’s interesting that it’s Blairites and neocons who want to bomb Assad, not conservatives.

Those who in 2013 supported striking Syria in retaliation for the government’s presumed use of chemical weapons said that if we did not act, he would take that as a signal he could use chemical weapons with impunity.

If the chemical-weapons attack is the work of the regime, they were right.

Russia then brokered an agreement for the destruction of Assad’s chemical-weapon stocks, the size and nature of which Russia knew about because Russia had sold them to Syria. If the government has used chemical weapons numerous times since then, this may have been a lie, even though the Organisation for the Prohibition of Chemical Weapons received the Nobel Prize for it. On the other hand, if the chemical in question is chlorine, which has civilian uses, this was not covered in the 2013 agreement.

But why are chemical weapons very important?

Bombs have killed countless Syrian civilians, including women and children. The cruel Syrian government has killed and tortured huge numbers. So have the rebels, though the numbers killed by the rebels are a lot smaller because they do not have an air force. Russia has bombed hospitals.

And then there are the children bombed in Yemen by the brave Saudis.

Obama drew a “red line” around chemical weapons, unwisely, without consulting the State Department or anyone else.

He then decided not to act in 2013 when his red line was crossed and thus lost very much face, an important thing in Asia.

But why should his red line bind the U.S. and U.K. now?

Remember, we have no right to bomb Syria, unlike Russia, which has the right to do so because she is acting at the Syrian government’s invitation.

And the perplexing question, as in 2013: Why did the Syrian air force use chemical weapons now, just as they are achieving total victory in Eastern Ghouta using bombs?