Too Pretty for Politics 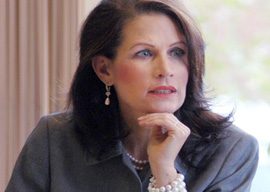 The American political class is becoming better and better-looking. The trend began back in the heady days of 2008, when that mulatto presidential candidate from Illinois was praised as much for his “dashing” appearance as for his hopefulness. He set a visual precedent that his so-called opposition was quick to follow. In the lead-up to the 2012 election, we are now graced with Michele Bachmann’s “groomed glamour,” Rick Perry’s “chiseled features,” the “1950s TV dad” Mitt Romney, and Smokin’ Sarah Palin. There were others in the interim, such as that non-witch anti-masturbation Senate candidate from Delaware, Christine O’Donnell.

The idea of a good-looking politician is a profound perversion. Politicians have ugly, ugly souls. They are routinely engaged in crude deception, are perennially nonproductive, and are sadistically aroused by the opportunity to boss others around. The current presidential candidates are abysmally ignorant, boasting a level of awareness lower than most self-cleaning ovens. They should be ashamed of themselves. They should be pallid and quivering from insecurity and guilt, deformed and hairless from compulsive self-harming behaviors, and bloated with cellulite for good measure. No matter their views, they should be terrible to behold.

“The idea of a good-looking politician is a profound perversion. Politicians have ugly, ugly souls.”

Americans used to understand this. Once upon a time we elected leaders such as the strangely androgynous John Adams, the putty-faced George Washington, Abraham “Son of Frankenstein” Lincoln, and the horror-movie cabin-dweller William Henry Harrison. But alas, that tacit social agreement has faded away. It is now up to us to revive it through bold action. In an expression of my infinite selflessness, I shall volunteer: I hereby call for a ban on all good-looking politicians. Effective immediately. Forever.

The current presidential candidates don’t have to leave the race completely—they can stay on as the advisors or masterminds behind their ugly replacements. And these replacements can be culled not only from the political world but from the general collection of public personalities. For instance, Obama could be replaced by lazy-eyed Hollywood actor Forest Whitaker. Wouldn’t a proposal for another stimulus package sound more appropriate coming from a stuttering, ogre-like figure’s lips? Playing POTUS would mean a hefty pay cut for Forest, though, so as Plan B we might consider Meles Zenawi, gnomish Prime Minister of Ethiopia. Under his leadership, new green-collar job giveaways could be announced by someone who apparently just crawled out of a log. If Meles is too busy in his homeland, we could always try stuffing our First Lady into a suit and tie. (But I have too much compassion for that.)