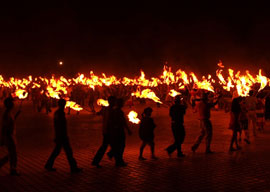 As I type this from my heavily black neighborhood, I hark back to my wigger days and recall something that Chuck D from black-nationalist rap group Public Enemy said to me wearily when I interviewed him back in 1990:

You tell people what you are, and people still don’t believe you.

I couldn”t have said it better.

American cultural discourse has imploded with the slimy floridity of a rectal prolapse. At the moment I kinda sorta wish the whole world had one mouth and I could vomit into it.

Still, once again, like Charlie Brown naively rushing up to kick a football that Lucy’s holding, I”m going to try and explain myself as well as I can manage, knowing that many of you jerkoffs will misrepresent what I’m saying because, well, that’s what jerkoffs do, isn”t it?

If you aren”t just another simple, lowly, retarded, brainwashed, drearily predictable zombie witch-hunter and sincerely want to understand what makes me tick, the first thing you must accept is that I”m fundamentally antisocial and never, ever, ever, ever, EVER go with the crowd, no matter what crowd it is. I figure that wherever the crowd is standing at any given moment, they arrived there for entirely the wrong reasons. Wherever a crowd has gathered, there’s never enough space for me. Accordingly, I”ve had a lifelong affinity for heretics rather than for high priests. The problem is that they keep switching them around, but I always stick with the heretics.

These days, “racist” is the favorite smear word for the ideologically intolerant. When people ask me if I”m a “racist” I always ask them for their personal definition of that eternally shape-shifting and ever-expanding social construct. I then explain either why I am or am not a racist based solely on their definition. I also explain that I think the term itself is silly and ultimately meaningless, but it’s not a word that scares me like it appears to cause testicles to leap out of nutsacks and hit the floor running nationwide. But my interrogators”or, just as often, my accusers”hardly ever seem to be looking for explanations. They don”t even seem to know the difference between scientific inquiry and the Spanish Inquisition. Rather, they seem hell-bent on using a rusty knife to pry open my cold heart like a stubborn oyster shell to discover the boundlessly irrational primal HATE they are certain throbs inside. True believers that they are, they take it as an article of faith that evil lurks within the hearts of those who don”t think like they do, and goddamnit, they”re going to find it whether it’s there or not.

“They don”t even seem to know the difference between scientific inquiry and the Spanish Inquisition.”

There are reasons I choose to live around black people rather than white liberals. For one thing, the rent’s cheaper. Another is that I truly and sincerely hate white liberals and couldn”t stand to live around them. One day I might even go so far as to write a 15-point guide about how to behave if you should accidentally wander into a white-liberal neighborhood. The blacks tolerate me better, anyway. They have far better senses of humor than white liberals. To them I”m just that Crazy White Boy rather than that Evil White Male. And I think they appreciate and respect that “Crazy” part just enough that they don”t fuck with me.

When I was a young outsider I identified with blacks because at the time they, too, were oft-mocked outsiders rather than the untouchable sacred cultural cows into which they”ve morphed. I”m not impressed with the modern wave of anti-racist whites because there’s absolutely no bravery or risk involved with it. I crossed color lines back when there was actually a white herd with a group consciousness in America and most whites would give you flak for doing such things. When I was a fey theater fag in the late 1970s, I invited my half-black cast from an inner-city production of Godspell to my birthday party in my all-white neighborhood and caused a minor scandal because of it. There were kids at school who never spoke to me again. In the mid-80s, when it was still somewhat culturally revolutionary for MTV to play Michael Jackson videos, I was the only white guy I knew who had a black girlfriend. By that point in our nation’s cultural development, the only people who gave us static about it were black dudes. And I”m still the only white guy I know besides my son who lives in an 87%-black zip code.

Then again, it was a black guy who robbed me at gunpoint in Philly way back in the late 1970s and a black guy who robbed my wife at gunpoint in Atlanta a week after Obama got elected. It was a black guy who punched me in the face in front of a cheering black crowd during a cab dispute in which he was not involved. And I”ve had more than one black person tell me to my face that I owe them”not for anything I”ve done, but for, you know, history. So kindly shove your false notions of my sheltered, prejudiced life and lack of real-life experience with blacks somewhere that you don”t actually enjoy having them shoved.

Never once have I done or said anything that directly harmed a single black person, yet somehow I”m still made to bear the presumption of eternally indelible inter-generational collective guilt”talk about a goofball social construct! And I still don”t understand how pointing out such daffily pseudo-religious inconsistencies makes me the worst kind of human being possible rather than someone who calls bullshit when he sees it. If you could explain all that using flow charts and without stooping to name-calling, I”d be ever so grateful. I, for one, am earnestly searching for explanations rather than for witches. As I see it, pointing this all out doesn”t make me a bad person; it makes me a heretic.

It also”ironically, given that we live in a society that gives so much lip service to “diversity””makes me a heretic to suspect that in aggregate, blacks may truly be different than whites in ways that can be quantified. I think it’s preposterous to simultaneously claim to believe in evolution while insisting we all somehow wound up equal. As a believer that the evolutionary process is real and ongoing, I believe their sub-Saharan ancestry may have lent them certain physical advantages and certain cognitive disadvantages.

I know. Horrible, isn”t it? How could anyone in this day and age, after all we”ve been through as a society, believe in what all the evidence suggests and zero evidence disproves? HATE must be the answer; logic has nothing to do with it. Only the unenlightened don”t realize this.