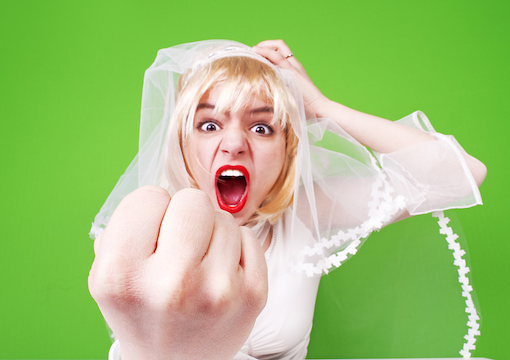 About 25 years ago, I had a patient whose marriage broke up after an hour. Her groom had answered “Yes” to the following question, put to him according to the rites of the Church of England: “Wilt thou love her, comfort her, honor, and keep her, in sickness and in health; and, forsaking all other, keep thee only unto her, so long as ye both shall live?” Then he punched her in the face at the wedding reception and called her a slut.

When, therefore, I read the headline of one of my local newspapers—‘Wedding brawl sparks protest’—it seemed quite like old times. According to the report, the reception “descended into a punch-up,” after which three people were taken to hospital.

But some aspects of the happy occasion were thoroughly modern. The families of the bride and groom were united in their condemnation of the hotel where the reception took place. According to them, members of the hotel staff took videos of the brawl on their telephones and posted them on YouTube and social media. This, according to the families, constituted an invasion of their privacy and caused “ongoing trauma” to guests and attendees.

They complained also that the hotel was negligent because of its “poor crowd control.” They are now threatening to sue the hotel on both counts. The most likely result of any legal action is a settlement out of court without admission of liability. Our legal system has become something between a blackmailer’s charter and a protection racket.

The newspaper reported that the hotel “strongly refutes the claim.” It quoted a spokesman for the hotel as saying, “These claims are all fabricated. We refute them entirely.”

I activated my inner pedant at once. The claims were not refuted, they were denied, which is not the same thing at all. Whether the claims are true or not, and whether, if true, they give rise to any legal liability, has still to be established. But increasingly in Britain (and also, I have noticed, in France), people are unable to distinguish between the meaning of the words denial and refutation. And this confusion, it seems to me, is not either entirely insignificant or entirely innocuous.

“Our legal system has become something between a blackmailer’s charter and a protection racket.”

In a world in which people claim to have their own truth, and that their opinions are as valid as anyone else’s because a cat may look at a king, it is not surprising that the meaning of the two words should be confused or amalgamated. Denial requires only that someone denies something; refutation means the establishment of the falsehood of a proposition because the empirical evidence contradicts it, or because the reasoning of which it is the conclusion is invalid. The first is entirely subjective, the latter is largely objective (which is not to say that it may not be mistaken). Where my criterion of truth of something is whether I believe it or not, denial and refutation are indeed the same. Thus the confusion of meanings is not without wider social significance: It is not a mere malapropism.

The brawl over, the two families involved have mounted demonstrations outside the hotel with banners complaining of the hotel’s “Absolute invasion of privacy” and its abdication of its “Duty of Care.” The families are united both by and in their hope of financial compensation; it is the first time I have heard of such a unifying effect of our system of tort law.

What is most interesting about their claims is the psychology or worldview behind them. In this worldview, if people behave badly, some authority (in this case the hotel) must be held responsible and liable for it, even if that authority did nothing to provoke it, did not want it, could not have anticipated it, and could not have stopped it. The hotel, which advertises itself as being in a quiet location, was supposed by the complainants to have staff trained in riot control. Rioting guests in hotels cannot be held responsible for the damage they do or the injury they cause. The fault lies with those who failed to prevent them from doing damage or injuring people.

Whether a riot at a wedding party, during which a substantial number of the guests are caught on camera committing serious crimes, has any kind of legal privilege, I leave it to lawyers to decide (our law having long since departed from common sense). But it is surely shameful (and shameless) that anybody present at such a riot should attempt to extract money for breach of his or her privacy. If any compensation were morally due to those who were present but not participatory in the riot, it is elementary natural justice that it would be due from those who actually rioted and thereby directly caused fright or injury. If one thing is certain, however, it is that they, those directly responsible, will not be sued, both because they have less money than the hotel and are probably not financially worth suing, and because they are friends or relations of the potential litigants.

By ascribing a “duty of care” to an organization such as the hotel, making it responsible for adult behavior it could not reasonably have anticipated (as against, for example having failed to take reasonable precautions against the risk of fire), the potential litigants were in fact infantilizing themselves and the people with whom they were associated. A hotel is a hotel, not a parent.

The tort law often has the effect of infantilizing people by encouraging them to deny their own responsibility, trading their status as adults for the hope, in most cases forlorn or delusory, of a large payout. This is not to deny that our tort law does sometimes result in justice for the maltreated, but at tremendous cost both financial and civilizational. The tort law encourages deception (including self-deception), fraud, exaggeration, false witness, and infantilization. It legalizes corruption, insofar as cases of no merit nevertheless often result in payouts for the plaintiffs because it is more expensive for defendants with right on their side to contest the case to the bitter end. It is often responsible for more injury to the plaintiff than the original injury that caused the plaintiff to resort to it in the first place.