Toss Another Bag of Coal on the Christmas Fire 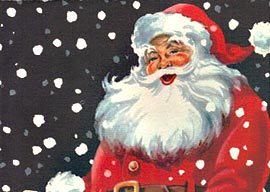 It’s been well over forty years since I wrote you a letter, but I don”t want you to think I”m an anti-Santite. It’s just that I”ve been busy.

You see me when I”m sleeping. You know when I”m awake. You know if I”ve been bad or good. To be frank, I can”t tell the difference between you and a stalker.

But if you can hand-deliver toys to all the world’s children in a single night with only a sleigh and eight tiny reindeer”one with a severe case of rosacea and whom I suspect may be an alcoholic”you are definitely more efficient than UPS or FedEx. I”m hoping that you might be able to squeeze in a miracle or two on my behalf. Since I never seem to get what I want for Christmas anyway, I figure I”d go straight back to the source.

You”re from the North Pole, right? At least here in the Northern Hemisphere”you know, the part of the world where people, uh, develop written languages and invent stuff”the days before Christmas are the darkest ones of the year. Even in daytime the cloudy skies are lit Suicide Grey, and whenever the temperature dips below 40, I”m screaming like a nun who’s seen a church mouse.

In short, this time of year puts a crimp in my normally bubbly, gregarious, and effervescent personality. But I”m not seeking any toys. I”ve compiled a wish list of things that would lighten my winter doldrums.

I wish that what I see with my very eyes was all an illusion.

I wish I was wrong about a lot of things. Too many things.

I wish I could find one honest person who disagrees with me and can stay on topic.

I wish that brainwashed people didn”t reserve a special hatred for those who aren’t.

“I wish that people would stop getting so offended and reclaim their sense of humor.”

I wish I lived in a world where people can examine my written statements for truth and falsehood rather than constantly searching for my motives, especially when they almost always get my motives wrong.

I wish that people would stop getting so offended and reclaim their sense of humor. If they never had a sense of humor in the first place, I wish that modern medicine would develop a way to inject them with it. If they refuse to accept the injection, I wish there was a way that jokes made at their expense would actually kill them.

I wish that it became possible for people to actually gag to death on their own smugness.

I wouldn”t mind seeing Bill Maher get accidentally shot by a rifleman on safari who mistook him for an aardvark.

I wouldn”t mind if Quentin Tarantino was beaten to a pulp by an angry black mob while he pleads in vain that he’s on their side and they derisively chant, “This ain”t no movie, BITCH!”

If Rahm Emanuel were to choke to death on a bagel tonight, he still wouldn”t get a Christmas card from me.

If Ed Schultz were to die from a hemorrhoid explosion, I still wouldn’t watch his TV show.

I wish you could convince me that people everywhere aren”t getting as dumb as toadstools.

I wish that the world’s mean IQ was three standard percentiles higher.

I wish that schools would focus on educating rather than indoctrinating.

I wish we had an educational system where kids are taught math and logic rather than emotions and hysteria.