Toulouse: The Dark Side of Diversity 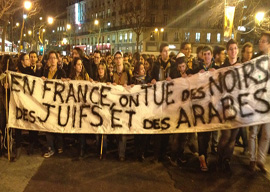 "In France we kill blacks, Jews and Arabs"

As an act of pure evil it was difficult to match.

After dragging the 8-year-old by her hair across a schoolyard, the killer put a 9 mm pistol to the girl’s head and pulled the trigger.

The gun jammed. So he took out a Colt .45 and finished her.

She was one of four victims. The others—a 30-year-old rabbi and his two boys.

As the gunman had targeted a Jewish school and the bullets were identical to those used in the murders of two North African soldiers and one black soldier, suspicion fell on some neo-Nazi racist.

And in France’s tight presidential campaign, left and center moved swiftly to exploit the atrocities by charging the French right with creating an atmosphere in which such racist horrors can occur.

“Killings Could Stall Election’s Nationalist Turn,” ran the New York Times headline. The debate over whether the murders were “inspired by anti-immigrant political talk is likely to continue,” wrote the Times’ Steve Erlanger, “both as a weapon in the presidential campaign and as a more general soul-searching about the nature of France.”

“Mohamed Merah was seeking revenge against Jews for the deaths of Palestinian children and against French soldiers for fighting in Afghanistan.”

French President Nicolas Sarkozy was thrown on the defensive.

These murders, said centrist candidate Francois Bayrou, “because of their origin, of the religion of their family,” are linked “to a growing climate of intolerance.”

Politicians “have the duty to make sure that tensions, passions, hatred should not be kept alive at every moment. To point the finger at one or another according to their origins is to inflame passions, and we do it because in that flame there are votes to get.”

The massacre at the Jewish school and the murders of Muslim and black soldiers, said the head of France’s Council of Muslim Democrats, “are a strong signal sent to politicians and, more particularly, to those who, for several months, have played with fire.”

And who had “played with fire”?

Sarkozy has been toughening his stance on immigration and national identity. In a March 7 debate, he said that there are “too many foreigners” in France and that assimilation is “working worse and worse.”

He pledged to cut immigration in half.

Last summer, Sarkozy sought to deport Gypsies who had overstayed their visas. In echo of German Chancellor Angela Merkel, he has called multiculturalism a failure.

He has spoken of revising the Schengen agreement, which lets residents of the European Union travel freely across borders. He has denounced burqas and facial veils worn by Muslim women. Boys and girls, he says, should swim together, a practice intolerable to devout Muslims.