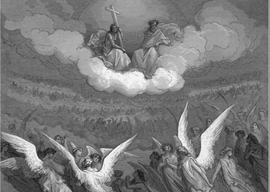 Far more than any other animal, the human being is able to gain some control over nature. It is an extraordinary accomplishment. Worship of the natural elements—so fearsome to our primitive ancestors—has given way to airplanes and spaceships, man navigating the skies and space in triumphant testament to his creative power. The problem is that this special ability comes with a tendency to refuse to recognize natural limits. Then our unique mastery aspires to be absolute, and instead of controlling nature, we vainly go against it. The result is debasement, which today, however, is increasingly taken for progress, given the reluctance to acknowledge the validity (let alone primacy) of any force outside the self.

Transgenderism is a prominent example of this phenomenon, for its premise is the utter rejection of reality itself. Transgenderism depends on the belief that gender is not something we inherit, like race, history, and so much else. Rather, it is nothing but a “social construct.” Now, this is, of course, the product of a woman’s mind—namely, the lesbian feminist Judith Butler, whose personal despair is the source of the noxious concept, rather as Jean-Jacques Rousseau’s self-delusion* about his exceptionally good nature is the ideological source of the destructive sentimentalism that has characterized the modern world. In dilettantish fashion, the celebrated sophist draws on J.L. Austin’s rather technical work on speech acts to support her claim that, in Martha Nussbaum’s words, when “we act and speak in a gendered way, we are not simply reporting on something that is already fixed in the world, we are actively constituting it, replicating it, and reinforcing it. By behaving as if there were male and female ‘natures,’ we co-create the social fiction that these natures exist.” What would motivate Butler to take this position? The same thing that led John Stuart Mill to write The Subjection of Women (1869). The old prejudices—say, that men can’t be nurses (“a woman’s job”) and that women can’t be engineers (“a man’s job”)—took social customs as justifications for inaccurate beliefs regarding things that were supposed to be “already fixed in the world.” Insofar as some acts or customs circumscribe human beings, on the false assumption that there is some intrinsic reason the genders can’t do this or that, these things are injustices that no fair-minded person should tolerate.

“Avoiding hurt feelings at all costs now seems to be the very summit of human wisdom.”

The absurdity is that Butler assumes there is never anything prior to the “gendered” things we do, as if it were obvious that they are all just “social fictions,” as opposed to representations of something essential. Although the body is undeniably a biological endowment, its significance, we are to believe, is for us to determine. And it is here that Butler’s thought, so important for transgenderism, emerges as an intellectual disease. Butler has nothing substantive to say about biology, yet for all she knows, “gendered” customs actually reflect the biological realities that her work must ignore, because otherwise she would immediately be seen as the discreditable figure she is. Sex hormones have been found to influence thought, feeling, perception, judgment—indeed, virtually everything. Nor will it do, for anyone who doesn’t share your “progressive” political agenda, to just assert that there is nothing to such influence but “patriarchal conditioning” or some such academic cant.

Gender dysphoria—a sense of incongruence between one’s biological sex and one’s gender, accompanied by clinically significant distress or impairment—is sometimes treated in adults by hormones or surgery, but there is little scientific evidence that these therapeutic interventions have psychological benefits. Science has shown that gender identity issues in children usually do not persist into adolescence or adulthood, and there is little scientific evidence for the therapeutic value of puberty-delaying treatments. We are concerned by the increasing tendency toward encouraging children with gender identity issues to transition to their preferred gender through medical and then surgical procedures.

Their concern is quite justified. The United States, and the West generally, is full of well-meaning people—therapists, teachers, school guidance counselors, and others—who want to believe that there is nothing wrong with “gender dysphoria.” This desire is akin to the attitude many now take toward homosexuality. In each case, one is not supposed to believe something is wrong with certain people, because doing so might cause them pain. And yet, it has never been shown that anyone is “born that way,” and it may be that both male homosexuality and gender dysphoria signify failures of development. Female homosexuals, it seems, are usually so by deliberation: In their weariness or disgust with men, they choose to be with other women. Presumably they could, if they wished, go back to men, as it were. Male homosexuals, based on their own accounts, appear to be so because of childhood traumas or abuse. It may take a wide variety of forms, but the trauma or abuse always alienates the boy from his father or from other boys his age. Something likely thwarts the development of people who have gender dysphoria, and though they should not be bullied or ostracized, as we learn from the passage quoted above, there is little reason to believe hormones or surgery will help.

For those “solutions” constitute a pernicious faith in man’s ability to change what he is. Reason is to make reality into whatever one wants reality to be. Yet this practice, however “inclusive,” has numerous harmful and ridiculous consequences. Even after surgery, incidents of depression and of suicide remain extremely high among transgender persons, nor is it clear that these things are attributable to “society’s lack of acceptance.” If there is nothing to the self but acts in Butler’s sense, then there is no reason someone who elects to identify as a monkey or even a bucket of rocks should not prompt our recognition of his chosen status. If I identify as a woman, what should I do about prostate exams? What about prostate cancer itself? Should I ignore it? If a woman identifies as a man, should she ignore a vaginal cancer diagnosis? If she does not, are her doctors to pretend she does not have a vagina (perhaps referring to it as a penis, or as something else, anyway)? Should they be coerced into playing her delusional game? Are we really helping people just because we choose not to hurt their feelings? Hurt feelings used to be considered a necessary step along the way of learning to live well. Avoiding them at all costs now seems to be the very summit of human wisdom.

We notice today a striking increase in “gender fluidity” and in “alternative lifestyles.” Although some of the greater prevalence is surely owing to the fact that life outside the traditional heterosexual domestic model is no longer stigmatized, it is difficult to believe that the degeneration of the family is not a causal factor here. Like sex itself, having children out of wedlock used to be a matter of shame. It is no longer so. Marriage used to be understood as a partnership that people undertook for fundamentally practical reasons centered around survival. Now it embodies a strange expectation: “emotional fulfillment.” Like a bottomless soft drink, one’s spouse is to keep one perpetually satisfied and refreshed. This sentimental notion of marriage, so representative of our time, is terribly wrongheaded—indeed, it is mere egotism—and the result is a culture of children, many of them unintended, who are poorly raised products of transient encounters. Nor is sticking it out in an unhappy marriage for your child’s sake the bounden duty that it once was.