Trapped Between Debt and Default 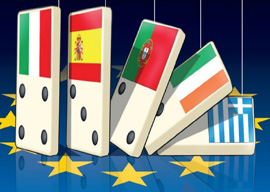 Who is worse—the pusher or the addict? I’d say it’s fifty-fifty as they sustain each other, although the addict has the moral high ground. Greece is the addict. The German and French banks are the pushers, with Brussels the Godfather shipping the stuff in from Afghanistan. The Godfather is not the cuddly Brando type, but rather an autocoprophagous degenerate who managed a coup d’etat while Europe slept. The Godfather is now defending his turf with Caligulan levels of depravity.

If I had one wish, it would be to see Europe’s dregs—dwarfs such as Barroso, Draghi, Rehn, Van Rompuy, and the rest of the scum—in the dock the way the Greek colonels ended up. At least the brave Greeks who pulled the coup on April 21, 1967 had the courage to roll the tanks out and take their chances. One of them, Costa Papadopoulos, brother of the leader George Papadopoulos, is still in prison, the junta having collapsed in 1974.

“What Brussels demands of Greece is as realistic as asking a middleweight boxer to bulk up to heavyweight while on a starvation diet.”

I am very serious. These midgets who have done away with democracy in the name of democracy need to be tried, convicted, and jailed for life. When the Austrians voted in Jörg Haider some time back, the scum in Brussels said no way. They threatened a boycott because they didn’t like the way the Austrians had voted. When the French and the Dutch rejected the 2005 referendum, they were rejected in turn by the Brussels commissars. The Lisbon Treaty, ditto. In Hungary the people have overwhelmingly voted for the Fidesz party, but the Brussels apparatchiks lectured the Hungarian premier on his internal policies. Daniel Cohn-Bendit, a Green euro MP and probably the most disgusting man in Brussels and Berlin, told the Hungarian premier to show more respect for the EU or else. Instead of instantly kicking Cohn-Bendit in his nonexistent balls, the Magyar went home with his tail between his legs. What in the hell is going on here?

Let’s now get to the Greeks. They are caught between the Scylla of debt and the Charybdis of default. What Brussels demands of Greece is as realistic as asking a middleweight boxer to bulk up to heavyweight while on a starvation diet. The Greeks cannot and will not ever be able to pay the debt and interest simply because even under the cruelest austerity by the year 2020 the deficit will still be more than the GDP. Most likely the economy is in freefall and will continue to fall for years to come. The Euro Scum Elite know this but have an agenda of their own—keeping their perks and positions of power in Brussels—so they are immune to Greek suffering.

The ones suffering are the innocent poor made up of those who work for a salary in the private sector, pensioners, and small businessmen and women. Worse, the Greeks do not seem to have learned anything since the crisis began. They still believe in the most thieving politicians this side of Nigeria, and the next Greek prime minister will be Antonis Samaras, a malevolent, blackmailing, opportunistic demagogue.