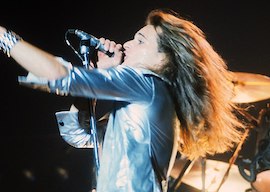 LOS ANGELES—It was David Lee Roth who ruined personal-appearance contracts for all time with his Brown M&M’s Clause in the ’80s. The story sounds apocryphal but it’s true: Any promoter hiring Van Halen for a concert was required to supply M&M’s in the band’s dressing room but “ABSOLUTELY NO BROWN ONES.”

In later years Roth would claim that this was not an example of spoiled rock star entitlement but a way to make sure that concert promoters read the entire contract and took care of other, more important provisions. I was actually buying this—promoters can be forgetful and dense at all levels of the business—until the Smoking Gun website tracked down the famous M&M’s rider so that we could read the rest of it. In order to “present to your customers the finest in contemporary entertainment,” Van Halen also needed two dozen English muffins, but not just any English muffins—they had to be Thomas brand English muffins—plus two cases of beer delivered precisely at 6 p.m., two more cases (one Budweiser and one Heineken) delivered to the stage manager at 7 p.m., different food menus for even and odd days, and, just to keep you on your toes in the implements department, “all forks must have four prongs.” Backstage the band also needed one case of Budweiser, four cases of Schlitz Malt Liquor (really?), one half case of Tab (perhaps even more shocking than the malt liquor), three fifths of Jack Daniels Black Label, two fifths of Stolichnaya, one pint of Southern Comfort, two bottles of Blue Nun white wine (whoever that was should lose his rock-star cred forever), three packs of Marlboros (these riders are for one day—is that guy dead yet?), and—the mind boggles—“one large tube of KY Jelly.”

The rider ran to eleven pages and is, in fact, ridiculously demanding. (“Any caterer not providing adequate condiments, utensils or ice will be subject to a $100.00 fine.”)

Meanwhile, those of us who travel at the opposite end of the rich-and-famous spectrum—university jobs, nightclubs, movie theaters—have long suffered the M&M consequences.

Who does he think he is? A ROCK STAR? Do you want me to separate the M&M’s?

“Presumably you could sleep by encasing yourself in bubble wrap, but then again, I’m sure they would charge you for the bubble wrap.”

And the way this usually plays out is that they suck you in with promises that “we’ll put you up at the greatest hotel in Leadville, Colorado, and pay 100 percent of your expenses,” and regale you with stories about “the most award-winning craft beer pub in America” (every venue sits next to the most award-winning craft beer pub in America) and scenic vistas and tours of historic buildings or charming dive bars (yes, the words “charming” and “dive” are frequently juxtaposed) or, in the case of colleges and universities, tours of futuristic laboratories, gargantuan sports stadiums, and houses once occupied by the pre–Civil War president.

What they never, ever tell you is that nine months later you’re going to be traveling to and from the venue by hanging on to the back seat of the Mad Max gyrocopter.

I don’t just mean you get the middle seat. I mean you arrive at the airport to discover that your ticket requires you to spend fourteen hours jammed into a midget chair (I’m 6 foot 4, 215 pounds, so I have permanent knee injuries to prove the thesis of this article), lay over in places like Columbus, Ohio (an airport notorious for having minimal places to sit and a single overpriced bar), and pay exorbitant fees for seat selection, luggage (not overweight luggage, just plain luggage—up to $100 per bag), carrying bags onto the plane, in-flight food (one airline even charges for water), extra legroom (meaning any legroom), slow Wi-Fi that probably won’t work for most of the flight anyway (not that you’ll be able to use your laptop without elbowing someone in the gizzards), asking the gate agent to print out your boarding pass, or—God forbid—changing the ticket to an earlier or later flight. In fact, don’t even think about altering one of these so-called “basic economy” tickets. That’s the term they use, but what they should really call it is a “Nekkid Transport Shipping” ticket, because the only way you can use it is to proceed directly to your assigned torture chair carrying nothing and wearing nothing and then fold yourself into the equivalent of a Federal Express parcel. Presumably you could sleep by encasing yourself in bubble wrap, but then again, I’m sure they would charge you for the bubble wrap.

Meanwhile, the venue that loves you and is dying to have you and tells you that you have so many fans here describes the fitness club at the hotel (yes, you’ll need that for rehab), the fine dining options in the area, and the horseback-riding trails in the area, while never mentioning that the ticket they bought is going to cost you more than it cost them and will result in your being exhausted both before and after you spend a delightful day in their city.

And it’s not just the tiny horror convention or the impecunious lecture series or the independent movie theater struggling to hang on. I’ve gotten these fake airline tickets from some of the largest universities and well-endowed film festivals in the country. Of course I should have known I was going to have to pay for all those luxury items on my trip to see them—things like bags containing the wardrobe for my appearance—and of course I should have known not to get thirsty on the plane. Because every once in a while I’ll suggest to the booker that perhaps we should create an—ahem cough cough—rider specifying that there’s a certain level of civilized travel expected from all these people who love me. Not first class. Not even business class. But maybe the kind of ticket that can be altered or adjusted?

Who does he think he is? A ROCK STAR? Do you want us to separate the M&M’s?

So thank you, David Lee Roth, for making personal-appearance riders a despised document, symbolic of entertainer excess. If I ever see you, I’m gonna fold you into a pretzel and stuff you into that little metal box with the sign that says “All carry-ons must fit in this space.”