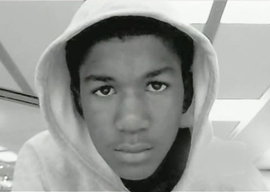 According to the police report of his fatal shooting on the night of February 26, Trayvon Martin stood exactly six feet tall. In death, he has become a hundred times larger.

I believe that’s because crass opportunists are using his corpse as a political Macy’s Parade balloon.

I could be wrong, you know. Unlike a lot of mouths spouting off about the events leading to Trayvon’s death at the hands of George Zimmerman on that rainy Sunday night in the seedy little gator-hunting town of Sanford, FL, I don”t claim to know what happened. That’s because I wasn”t there. More importantly, I don”t claim to know WHY it happened. That’s because I wasn”t inside the killer’s mind.

Sorry if that may strike you as an impudently objective approach. I realize that many people find even the feeblest attempt at non-partisan fairness to be off-putting at the very least. These days, any public display of open-mindedness makes a lot of people dizzy and has been known to induce agita in readers with sensitive metabolisms.

Although modern journalism suffers no shortage of liars, most of the false impressions it creates are more due to a careful omission of facts. And in the Trayvon Martin case, I”ve seen a whole lotta cherry-pickin” goin” on. Due to the way the saga is being framed, as well as the fact that it’s swollen into the top news story in America, a rancid little tug in the pit of my stomach tells me this could all get a lot more dangerous, and quickly.

The flames are being fanned by paid scribes and well-compensated activists who”ve been salivating for a good old-fashioned white-on-black hate crime, even though this isn”t technically one of those.

But the torches are being carried by those who are acting like they know exactly what happened”even though, like me, they weren”t there, either. They are gathering in mobs, donning hoods, and demanding blood vengeance just like people gathered in mobs, donned hoods, and demanded blood vengeance a hundred years ago. And just like the mobs from a hundred years ago, they seem to have the sympathy of the media and the president on their side.

“White boys who wear hoodies and eat Skittles don”t routinely get shot to death,” hyperbolized a black writer for the Atlanta Journal-Constitution. Black boys do.” (Martin was returning to his father’s house with an iced tea and some Skittles when he was killed. To my knowledge, he is the only black male ever to be killed while simultaneously wearing a hoodie and carrying Skittles on his person.)

“It appears that Trayvon Martin was stalked and murdered…the nation must ensure that this pattern and practice of people attacking and killing black men with impunity is ended,” says NAACP president Benjamin Todd Jealous, who, if anything, seems jealous that his skin isn”t darker.

Marc Morial, president of the National Urban League, reminded us all that “the murder of innocent black men in the American South is nothing new. Fifty-seven years ago, the White murderers of 14-year-old Emmett Till in the Mississippi Delta were acquitted of the crime in a clear case of racial injustice.”

“I am tired of burying young black boys,” Rep. Frederica Wilson (D-FL), said in Congress regarding Martin’s killing. “I am tired of watching them suffer at the hands of those who fear and despise them.”

“After a while one gets tired of the same old script being played out again and again,” said Bishop Donald Hilliard, a black church leader who recently met with US Attorney General Eric Holder to discuss the possibility of bringing federal hate-crime charges against George Zimmerman.

You know what? I”m getting tired of all this, too. I think a lot of people are.

Half-retarded “racial arsonist” Al Sharpton, apparently unashamed of showing his face in public after supporting the dubious causes of Tawana Brawley, Crystal Mangum, and the Jena 6, naturally fled down to Sanford, FL and led a mostly black crowd in a series of primitive chants and possibly subliminal voodoo incantations. The Reverend Jesse Jackson, still unscathed by last year’s charges of gay harassment, reared his porpoise-shaped head to claim that if Zimmerman is not arrested, “the protests will intensify and spill over into other dimensions,” which sounds vaguely threatening.