Treading Water With Bimbos and Bilkers 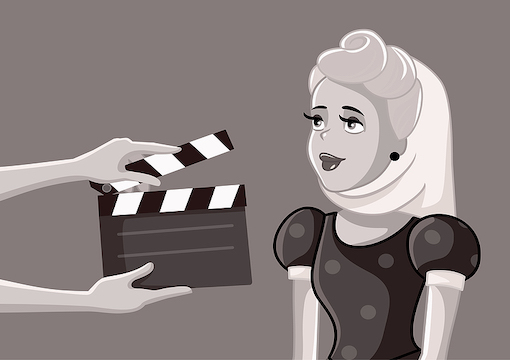 This week, I present the parable of the bimbo Kansan.

Bambi Bimbo leaves her Midwestern homestead to come to Hollywood. With her tight ass, toned tummy, pert breasts, and button nose, all her life she’s been told by her kin in Kickenschitt, Kansas, that she’s destined to be up thar on that silver screen.

She has a goal: to be “a star.” But after a few months in L.A. she realizes she ain’t special here; there’s tons of competition, racial favoritism, sleazy Weinsteins, and not a lot of work to go around. So Bambi begins to despair. And in her desperation, she signs up for Backstage.com and other local acting websites and voilà, displayed before her are tons of opportunities for busywork offered by our underclass of hucksters who prey on struggling actors.

“Boreing is the right’s version of a fentanyl dealer. If it didn’t feel good, no one would buy it.”

“Take my class! You’ll graduate as the next Scarlett Johansson! Only $200 a week.” “My talent agent showcase will put you in front of all the right people! Only $500!” “Personal acting coach to the stars! $300 per session!” “Intensive acting seminar!” “On-camera clinic!” “Casting director pay-to-play!”

And soon, Bambi is busy. With all the scams she’s paying for, she thinks she’s making progress. At the end of every day, she feels like she’s accomplished something.

But in fact, nothing she’s doing is getting her closer to her goal. It’s illusory. There’s no actual forward motion; she’s running in place.

The Bambi Bimbos I’ve known in my life, and dear God I’ve known many, came to trust me because my unique counsel revolved around snapping them out of the illusion of forward motion. I taught them to stop wasting money and focus on the goal. I never charged, never took a dime. Fact is, I actually get off on lording my expertise.

Why do you think I write these fucking columns?

Now I’m gonna relate Bambi Bimbo to conservative politics. Last week several friends who know me and my obsessions way too well forwarded me a glowing New York Times puff piece about Ben Shapiro and Jeremy Boreing and their desire to “remake the culture” by producing “conservative movies” paid for by folks like you.

I hope you didn’t skip past those five words: “New York Times puff piece.” Yes, sorry to break it to you, but that whole “the media’s against us” thing only goes for people on the right who aren’t part of the Ralph Wolf/Sam Sheepdog “mornin’, Sam” theatrics.

Jared Taylor is not part of that Kabuki theater; the media establishment genuinely wants to shut him down. Ditto Peter Brimelow. They’re villains who must only be spoken of but never to.

Boreing’s different. I’ve known him fourteen years and I know his MO well. He makes deals with mainstream journalists—they get juicy leaks about “right-wing” figures and events, and he gets to use the publicity to expand his suckers list—and I know this for a fact because I know the journalists he’s cahooted with. When Boreing and I worked with Friends of Abe (the “remake the culture” org of Hollywood conservatives), and when Boreing was handpicked by Gary Sinise to run it after Sinise vamoosed in 2015 (he dun got skeered o’ Trump), Boreing held the marionette strings of The Hollywood Reporter’s Paul Bond, a uniquely corrupt hack who exchanged puff pieces for tips.

To be clear, Boreing wasn’t doing anything leftists don’t. The difference is in the dishonesty. He’d make sweetheart deals with reporters to enrich himself while at the same time whining to FOA members about how “the media’s against us! We need our own media! Give me more money now!”

Boreing is deceptively stupid-looking, and I’ve come to suspect that he wears that awful toupee to lower people’s expectations of his intellect (“No guy who wears a cow pie on his head could ever put one over on me,” said every Daily Wire donor ever). But Gentile though he may be, he has a Jew’s nose for craftiness.

In early 2016, as Boreing was preparing to dissolve Friends of Abe and do, uh, whatever with all the dues and donations he’d collected, I was contacted by reporter Andy Kroll of Rolling Stone and The California Sunday Magazine. Kroll wanted to do an in-depth exposé of the group, and as an ex-member I was happy to help (Boreing had expelled me because twenty years earlier I’d noticed a few flaws with a building in Poland). I showed Kroll internal emails from the org detailing a pattern of ripping off the membership and, worse, possibly having been the catalyst for the Obama administration’s IRS war against conservative groups. Turns out FOA actually was trying to scam the IRS to get 501(c)(3) status, and that outright con is what prompted Lois Lerner to unfairly scrutinize smaller conservative orgs that were doing nothing wrong.

I told Kroll that FOA was in such deep trouble, Boreing was about to liquidate it. But in the end, Kroll made the same “Boreing deal” they all do; he penned a puff piece about how Friends of Abe will live forever and if you’re a conservative give ’em all yer money! “Friends of Abe is here to stay! Write ’em a check, hooray hooray!” And then a few weeks later Boreing shuttered FOA, exactly as I knew he would. But he couldn’t resist wheeling and dealing for that one last softball-piece money grab, to get a few extra bucks from his suckers before closing shop.

For the record, Kroll’s editor Kit Rachlis confirmed to me that Kroll had been convinced by FOA leadership to ignore the internal emails I’d shown him. Kroll now works at ProPublica, an org dedicated to deplatforming the likes of Jared Taylor and Peter Brimelow.

Catching on? Who gets the puff pieces and who gets shitcanned?

This was supposed to be a profile of Boreing, yet the big-money org he ran (into the ground) was left off the page.

Because FOA is Google-searchable (the NYT itself covered its battles with the IRS), so saying the name of a previous con in a piece geared to promote the current one might queer the deal if people search for info about the specific name.

I asked Bernstein about the omission. He swore that he’d never enter into any agreement to suppress information; the group’s name was “cut for space.”

Yes, “Friends of Abe” was replaced with “a private group for conservatives in the entertainment industry” to “conserve space.”

Dude, do you see a cow pie on my head? Don’t treat me like a tard.

Bernstein’s editor Stella Bugbee refused comment on the matter. But rest assured, Bernstein will get lots of future exclusives from Boreing for his cooperation in memory-holing the previous scam.

The leftists who run these publications want you to be conned. They know that these “remake the culture” schemes are worthless. They’re happy when you lighten your wallet by paying for the next pointless movie project. They’re happy to help Jeremy Boreing get rich, because they share the same goal, if for different reasons: shear you, and keep you preoccupied.

Ah, see how we’ve come full circle? You’re Bambi Bimbo. You have a goal, and a noble one. You want to fight the ruination of America at the hands of the left. If you have kids, or grandkids, you worry for them. And you should. But your goal is difficult to realize. You’ve lost more elections than you’ve won. And you look at the party that’s supposed to be leading the fight against America’s decline, and you see weakling sellouts at one extreme and conspiracy nuts at the other.

It’s frustrating. You want to feel like you’re accomplishing something.

Boreing/Shapiro colleague Matt Walsh made a fine movie about trannies, but he couldn’t resist selling it in the shadiest possible way. Last week, after Cambridge Dictionary altered the definition of “women” to mean “men in dresses,” Walsh tweeted “The ‘what is a woman’ question has been so effective that they’re now rewriting the dictionary to try and neutralize it. It’s absurd and Orwellian, but also a sign that we’re winning the argument.”

That’s a win? Losing the scientifically accurate dictionary definition of woman is a win? Shit, I’d hate to see a loss. But Walsh has to convince you that these movies make a difference.

In the 1980s conservatives produced a hundred documentaries about putting prayer back in public schools. None of them “won,” because school prayer was banned by SCOTUS. And to whatever extent it’s coming back, it’s because a new SCOTUS allows it. That’s how these things work; ascribing such shifts to “movie power” is voodoo. Trannymania will end when conservatives stop watching movies and file legal challenges that reach this very friendly SCOTUS, which would likely rule that trans ideology is a quasi-religious belief system like Scientology that can’t be proselytized in schools.

But like Bambi, you crave the illusion of forward motion. So along come Boreing, Shapiro, Phelim McAleer, Breitbart.com, and they tell you that for your generous contribution they’ll make a movie that’ll change the nation by bypassing elections and McConnell and Graham. And you’ll get something real out of it, something concrete, a movie to hold, cherish, cradle as your own.

Proof that you did something.

And hey, even The New York Times says we’re legit!!! How cool is that? It proves we’re not a scam!

So, like Bambi, you get lost in the illusion.

Now, in Bambi’s case, the endgame is that she reaches 40 and realizes she’s grown old and unemployable. Sixteen years went by like that. That’s how strong the forward-motion illusion is; I’ve seen it a thousand times.

So Bambi gets a real estate license or marries a 90-year-old rich guy for whom a 40-year-old blonde is a trophy.

By the time you snap out of the illusion, your country’s gone.

Yes, I’m a pompous ass. But heed my words on this one, because I know these guys too well: Stop giving your money to these “change the culture” movie scams. If you have a few extra bucks, put ’em where it counts: Donate to AmRen or VDARE or hey—how about the site that’s given this pompous ass gainful censorship-free employment for eight years?

If you want to spend your cash on the next “movies will change the culture” con, at least be honest with yourself: You’re frustrated, so you’re escaping reality and embracing the illusion, even though these scams have failed you a hundred times before.

Boreing is the right’s version of a fentanyl dealer.

If it didn’t feel good, no one would buy it.

My advice, hard-earned from experience: Just say no.