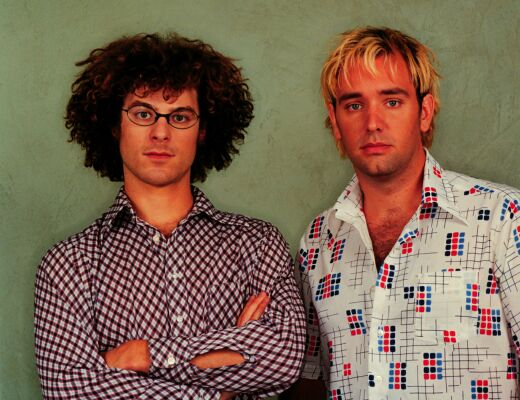 A few hours after reading an interview with Matt Stone and Trey Parker in Sunday’s New York Times Magazine, I watched them both on 60 Minutes. They’re all over the news because The Book of Mormon won nine Tonys, has already made over 32 million dollars, and is sold out for the next five months. I was enjoying what I see as “our people” on the TV when the overweight beer drinker I had invited over said, “Ah, who cares?” Like all couch potatoes, he is “over it,” and by “it” I mean anything that makes him feel like the lazy asshole he really is. “Everybody knows Trey Parker writes 99% of their stuff and he’s just a bitter old fag who wants to make fun of Christians because they make him feel bad.” I told him to fuck off. I had heard this unsubstantiated rumor before and it makes me mad.

It drives me nuts when people discredit entire debates by drudging up some incriminating personal detail about their opponent. “Oh, he’s just mad because he got kicked out of Metallica” shouldn’t matter. Is what he’s saying true or false? In my guest’s case, what he was saying was most likely false but if it was true, I couldn’t help but think it affected what Parker says. And I hate that I couldn’t help that.

“Does it matter who says it if it’s true?”

After the drinking buddy went home, I was left wondering if Trey Parker being gay would affect the way I saw his comedy. A week ago, I was lucky enough to get to see The Book of Mormon and I laughed my ass off. I now had to involuntarily put the whole experience through the retroactive gay filter. I did think it was unusual how perfectly these straight guys mimicked the musical. The play seemed to be about the hypocrisy of religion and how naïve believers are. One of the highlights is a song called “Turn it Off” where Parker (and the audience) laugh in the face of closeted gays who think they can hide their gayness. It reminded me of “Trapped in the Closet,” the banned South Park episode featured on last Sunday’s 60 Minutes that ridicules Tom Cruise for not being open about his homosexuality. Then I stopped myself. It may be counterintuitive, but why can’t people in glass houses throw stones if they hit their target? Does it matter who says it if it’s true?

It’s certainly nobody’s business if a chocolatier in Needham, MA, likes to make sweet love to a man after a hard day of packing fudge. That’s a no-brainer, but what if this closeted fag’s entire career was built on mocking closeted fags? Oprah became a billionaire by teaching people to be proud of who they are; however, if the rumors of her lesbianism are true, she certainly doesn’t practice what she preaches. Does she have the right to tell black lesbians how important it is to be yourself? Ellen certainly does. Isn’t Oprah doing black dykes a disservice by not telling the world she’s one of them? I don’t know.

When Senator Larry Craig hit on a man in an airport bathroom, Ann Coulter said the whole thing was needlessly intrusive. She pointed out that Craig was against gay marriage, not gay sex, and what he does on his own time is his own affair. I was inclined to agree. If John Wayne Gacy says murder is wrong, it’s still wrong. However, Craig was against more than just gay marriage. In 1996, he voted against prohibiting job discrimination by sexual orientation. He also voted against including sexual orientation in hate crimes back in 2000 and again in 2002. After seeing this entire context, I can’t help but think Craig is driven by his own frustrations, not what’s best for the rest of us.