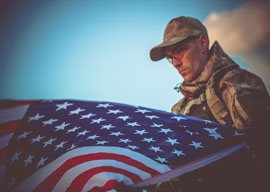 Remember the supermarket scene near the end of the Iraq War movie The Hurt Locker? Jeremy Renner plays an Explosive Ordnance Disposal technician. After countless telephoto shots of IEDs going off terrifyingly close, the sergeant is finally safe at home in America with nothing more stressful to do than pick out which brand of cereal to buy his small family. But a fish-eye lens shot shows the valiant warrior lost in a supermarket aisle seemingly a mile long.

Vanity Fair war correspondent Sebastian Junger, codirector of the documentary Restrepo about American soldiers in Afghanistan, points out in his recent book Tribe: On Homecoming and Belonging that American soldiers currently suffer from the highest rate of post-traumatic stress disorder in human history.

This short book tries to sum up the political lessons Junger has learned from a quarter century of going to and coming home from dangerous places. It’s a work of swashbuckling anthropological theory that tries to answer the question raised by Restrepo: Why do the guys defending a fort in Afghanistan find living in a tiny bunker to be a blast, while coming home to America is so discombobulating for them?

Junger offers one original suggestion for how America should help veterans psychologically adjust. Drawing upon the traditions of tribal cultures where old warriors tell their stories around the fire, Junger suggests that everybody gather in their town hall on Veteran’s Day and listen to vets vent about their war experiences.

Junger organized the first such event in America in 2015 in his hometown of Marblehead, Mass., with Rep. Seth Moulton and soldier-strategist Andrew Bacevich. Don”t expect it to be a reassuring or even coherent experience, he warns. But the participants seem to get something out of it; and you owe it to them.

“As Junger laments, Americans today seem more interested in reviling one another than in cooperating.”

The author of The Perfect Storm is most famous as an adventure journalist, a rugged fellow who can persuade similarly manly if less articulate men to answer personal questions about what motivates them.

Junger starts Tribe with Benjamin Franklin’s curious 1753 observation that an Indian child raised in the white man’s ways would reliably give up modern conveniences after “one Indian ramble.” In contrast, whites ransomed from Indian kidnappers often pined away for tribal life.

Moreover, it was not uncommon for white men to voluntarily join Indian tribes, which is not something that happens much in these days of casinos and reservations. For example, the titanic Sam Houston spent a half-dozen years living with the Cherokee, first as a teenage runaway, later after resigning as governor of Tennessee when his first wife rejected him. Indian sojourns evidently helped him get over his depressions and set him on the way to becoming the first president of the Republic of Texas.

In Junger’s telling, the French philosophes“ concept of the Noble Savage was not wholly a fantasy, but European thinkers got the story backwards. Rather than living in solitude, according to Junger, tribe members benefit psychologically from community, unity, and equality.

In Junger’s rather sketchy description, tribal life sounds rather like being in the Army, although with less hierarchy, less marching, and even more gossip. Hunter-gatherers, the most intense form of tribal life, are strikingly egalitarian, constantly forming backbiting coalitions to undermine the confidence of superior hunters to keep the strongest men from monopolizing all the women.

Similarly, Junger notes, humans living under seemingly catastrophic conditions, such as London during the Blitz, his father’s hometown of Dresden under RAF raids, and the besieged Sarajevo he visited as a young reporter, seem to enjoy better overall mental health than peacetime Americans.

The American plague of rampage shootings, Junger observes, a bizarre modern phenomenon that seemed to emerge about a half century ago, stopped for a couple of years after 9/11, perhaps due to greater feelings of solidarity. A “community of suffering, a brotherhood of pain” tends to incline people to treat their neighbors better than times of prosperity and status competition.

Junger is particularly annoyed by how wealthy, peaceful, individualistic America puts up with so much self-dealing. He’s irritated by welfare fraud and appalled that virtually no financial titans went to jail for 2008. A self-respecting hunter-gatherer tribe, he thunders, wouldn”t put up with that kind of corruption. The previous administration’s refusal to prosecute any zillionaires “shows how completely de-tribalized the country has become,” Junger complains in a novel use of the word.