Trick or Treat, Hear Them Bleat 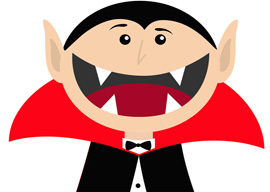 Remember when Halloween used to be fun? Before the left got its unwashed, THC-stained hands on it? Before finger-wagging SJW scolds began their NKVD-style war against costumes that might be seen as offensive to non-straight non-white non-males? Every year now, we get the same lecture: “No offensive costumes or else!” It’s gotten so tiring, I’ve developed Halloween fatigue. So, as I haven’t had a vacation in over two years, I’ve decided to take the week off and merely cut-and-paste the comments on the Facebook page of the superstore that always attracts the most costume-related complaints, Walmart. The sentences in bold are Walmart’s replies. I’ll be back next week. Happy Halloween!

Dear Walmart, I would like to complain in the strongest possible terms about your “vampire” costume. Vampires are MEN who forcibly and without consent PENETRATE their female victims. By selling this MISOGYNISTIC costume you are endorsing RAPE. I hereby demand that Walmart begin selling the feminist alternative to the vampire costume: Count Woke-ula, a soft-spoken undead beta male whose primary desire is not blood, but rather more women in STEM. The only thing Count Woke-ula puts the bite on is the patriarchy!

We applaud your suggestion. We have stocked our shelves with Count Woke-ula costumes.

Attention, Walmart: I am a fifth-wave fourth-dimensional intersectional feminist, and I find it appalling that you have a character named Count Woke-ula in your Halloween section. What’s “scary” about a man who LISTENS and KNOWS HIS PLACE? Relegating Count Woke-ula to the Halloween section implies that he is to be feared, rather than emulated. YOU MUST CEASE IMMEDIATELY the marginalization of Count Woke-ula!

We apologize; all Count Woke-ula costumes have been moved to menswear.

Hey, Walmart, I guess you don’t care about your black customers. I was shoppin’ there yesterday and I saw your skull masks, and they were all WHITE. Why the skulls gotta be white? I guess Walmart thinks black folks got no skulls. So you sayin’ we dumb? Hey, KKK, we got skulls. Get some BLACK skull masks NOW, or I promise you’re gonna get a visit from 500 furious niggas protestin’ outside your stores.

“Some people really know how to take all the fun out of Halloween.”

Unfortunately, our supplier doesn’t sell black skulls, so we have pulled the white ones from the shelves. We will continue to carry Captain America Red Skull masks.

As a Native American, I am incensed over your Captain America Red Skull masks. My people are not “redskins” or “redskulls.” What message are you sending our children by presenting a “red person” as the enemy of an American superhero? There is nothing heroic about GENOCIDE. Remove those masks AT ONCE.

Thank you for your comment. Captain America Red Skull masks will no longer be carried by Walmart.

While in your store today, I was SICKENED to see a shelf full of “wolfman” masks. Your SEXIST assumption that all wolf monsters are MALE is DISGUSTING. Why can’t a wolf creature be female? This is the year 2017, and such MALE-CENTERED DISCRIMINATION must not be tolerated. How can I teach my daughter that she is EQUAL to any man when WALMART is telling her that only men can be wolf monsters?

We have immediately added a line of “wolfwoman” masks to our inventory.

While visiting your store today, I was NAUSEATED to see “wolfman” and “wolfwoman” masks for sale. Your CIS-NORMATIVE assumption that all wolf monsters are gender-binary is REVOLTING. Why can’t a wolf creature be trans? We are in the year 2017, and such DESPICABLE CIS-CENTERED DISCRIMINATION must not be tolerated. How can I teach my transitioning human child that ze is equal to any cisgendered being when WALMART is telling zir that only those who conform to their assigned genders can be wolf monsters?

We hear your concern. We have added a line of non-cis wolf creatures to our stock.

As someone who is fighting a courageous battle against hypertrichosis, a condition that causes hair to totally cover my body and face, I DEMAND that you remove your so-called “wolfman,” “wolfwoman,” and “wolfnonbinary” masks AT ONCE. My disease is NOT your costume.

We apologize for any offense, and we’ve removed all wolf-themed masks from our stores.

I was in your store today lookin’ for a costume and what do I see? A “Jason hockey mask.” Hockey is the WHITEST sport in America. It’s a violent sport in which white people beat up a BLACK puck in front of a crowd of WHITE MILLIONAIRES. You better get rid of this racist WHITE PRIVILEGE costume or you’re gonna get a visit from 500 furious niggas protestin’ outside your stores.

Thank you for bringing this to our attention; we have removed all Jason hockey masks from the shelves.

Although Halloween is a time to solemnly reflect on diversity and social justice, we here at Cracked do allow that it’s okay to have a small chuckle via the donning of a costume, as long as it’s done respectfully toward all people except straight white males. If you would like to stock a food-related costume, I suggest “Pasta Fazool the Spaghetti Monster.” It’s whimsical, gender-nonspecific, and hella halal.

We have stocked our shelves with 100 “Pasta Fazool the Spaghetti Monster” costumes.

Dear Walmart: Your “Pasta Fazool the Spaghetti Monster” costume is nothing more than sheer, bald-faced cultural appropriation. It is well-known that China was the original inventor of pasta, a food that was appropriated by oppressive colonialist Italians. To slap an Italian identity on the beloved dish of my ancestors is an insult that flies in the face of all decency.

We have removed from our shelves 100 “Pasta Fazool the Spaghetti Monster” costumes.

Chris Sims again. I hella goofed. Dang…I have NO idea why I missed the spaghetti/China connection, especially with my degree in Advanced Culinary Appropriation Studies from Yale. Appropriating Asian culture is absolutely the WORST thing anyone can do, according to my boss at Cracked, David Wong (a.k.a. Jason Pargin the white guy). As a replacement, I suggest the “Frankie the Frankfurter” costume. This costume allows us not only a lighthearted chuckle, but it also lets us poke fun at the privileged, fascistic WHITE MALES who greedily devour hot dogs at baseball “games” oblivious to the police shooting deaths of INNOCENT AFRICAN-AMERICANS in the streets.

Our stores are now fully stocked with “Frankie the Frankfurter” costumes.