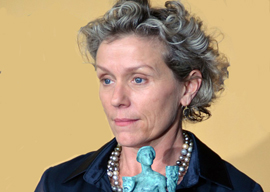 Moments after actress Frances McDormand employed her victory speech at the Academy Awards to demand diversity quotas in moviemaking, she was taught a lesson in diversity, good and hard, when her brand-new Oscar was stolen by a black megalomaniac.

Terry Bryant, a.k.a. DJ Matari, posted on Facebook a selfie video of himself kissing her statue, thanking his “team,” and exulting, “This is mine.”

Security at the official Academy Awards party apprehended the thief; and fellow winner Gary Oldman returned to Ms. McDormand her Oscar (her second, following her victory as the pregnant sheriff in the Coen brothers’ Fargo).

Just before her unfortunate encounter with diversity, McDormand had announced, “I have two words to leave with you tonight, ladies and gentlemen: inclusion rider.” This is a euphemism for stars demanding the imposition of racial and other quotas upon the people working on their movie.

Like so many famous actresses, Ms. McDormand is not exactly an expert on the nuts and bolts of getting movies made, with the 60-year-old admitting to reporters, “I just found out about this last week.”

Nobody seems to have inquired of Ms. McDormand if she’d asked her husband, Joel Coen, who has (with his brother Ethan Coen) co-directed McDormand in eight movies, what he thinks about her mandated diversity hiring brainstorm.

Joel probably considers “diversity” to be when he employs anybody outside his wife or his brother. To the Coens, “inclusion” would be hiring Roger Deakins, their cinematographer on their last dozen movies.

“If you are at all alert to contemporary political tendencies, you’ll notice how incredibly stupid The Shape of Water is.”

No one asked Ms. McDormand what her husband and brother-in-law would say if she attempted to use what star power her latest Oscar gives her to dictate to them that they should, say, hire a more diverse director of photography than the Englishman Deakins (who on Sunday won his first Oscar, after fourteen nominations, for Blade Runner 2049).

Like Silicon Valley, Hollywood had assumed throughout Obama’s first term that the vast web of race regulations ensnaring the rest of corporate America didn’t apply to them, due to their coolness (or whatever). After the Obama reelection campaign cashed their contribution checks, however, both California industries suddenly found themselves in trouble for not hiring enough blacks, women, and, uh, that other minority, the one nobody can remember.

Moreover, another question for Ms. McDormand might be: “Have you actually watched many of your husband’s movies? If you have, didn’t you notice how intensely white they are?”

To quantify this impression, I looked at the posters for all seventeen Coen brothers movies and counted a total of 58 stars highlighted by either a picture or large type. Of the 58, two Coen leads were black and one was Asian (all in The Ladykillers, one of their more forgettable films).

The brothers are straight, too, and they’ve shown little interested in gay themes. Their rare gay characters are seldom as saintly as is expected these days. For example, in Hail, Caesar! Channing Tatum’s Burt Gurney is the dancing leader of Hollywood’s Communist spy cell who rendezvous with a Soviet submarine off the coast of Malibu.

In other comic events at the Oscars, the newly diversified Academy voters celebrated their #MeToo moment by handing a Best Animated Short Oscar to retired basketball star Kobe Bryant. Kobe spent much of 2004 on trial on charges of raping a 19-year-old white woman. But she eventually dropped her criminal accusation and settled out of court with him for an undisclosed sum. So I guess that makes it all right. Plus, she was white.

While film critics have been wondering recently how they could have been so…toxic as to have long admired Woody Allen’s 1979 movie Manhattan about a 42-year-old man sleeping with a 17-year-old girl played by Mariel Hemingway, the Academy voted the Best Adapted Screenplay Oscar to 89-year-old James Ivory for Call Me by Your Name, a movie about deflowering a 17-year-old boy.

But that’s different because Ivory, unlike Allen, is gay.

Also, please keep in mind that Allen is in bad odor these days because of his inveterate white maleness. Nobody is apologizing for why Woody, a hardworking, Pete Rose-like talent but not exactly a transcendent genius, was so lavishly praised by critics for all those decades, which has something to do with his casting in Manhattan the granddaughter of the most prestigious arch-gentile of his youth, Ernest Hemingway, as the high school shiksa he’s shtupping.

That predilection would be…not appropriate to discuss in print, you understand.

While this Academy Awards show was so predictably leftist that Nielsen ratings were way down, voters forgot to uphold the overall theme and gave the two May 1940 movies four Oscars: Christopher Nolan’s Dunkirk won three technical prizes and Darkest Hour earned veteran Gary Oldman his first Best Actor award for his Churchill.

It would be interesting to see a debate between Nolan and Oldman over who hates Hollywood’s political correctness more.

While the mobs of Volunteer Auxiliary Thought Police are increasingly fanatical at policing non-leftist crimethink, much of the Nolan/Oldman-level talent appears to be drifting toward the right.

One exception, however, was the big winner at this year’s Academy Awards, Best Director Guillermo del Toro, whose The Shape of Water won Best Picture for being an art-house/schlock matinee movie about a white woman’s forbidden love affair miscegenating with the Creature from the Black Lagoon.

The Shape of Water’s plot is: A Democratic Party Coalition of the Fringes (a disabled woman, a gay man, a black woman, a Jewish Communist Russian spy, and a fish) unites to defeat the GOP Core American cishet evilest evil white male of all time (besides Trump, of course). Square-jawed white man Michael Shannon plays the epitome of hateful hate-filled white whiteness who epitomizes his white male privilege by peeing on the floor.