The Trouble With Islam: Inbreeding 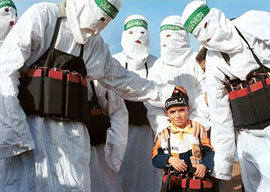 Fine. But try to find the “cultural bias” in…

“¢ Infant mortality in Norway’s Pakistani immigrant children was more than double that in the locals. Deaths due to multiple malformations were 10 times more common.

“¢ Two-thirds of immigrant schoolchildren with an Arabic background are still illiterate after ten years in Denmark”way worse than any other immigrant group.

“¢ Muslim immigration in Copenhagen County alone has led to the number of physically disabled children increasing 100 percent in 10 years.

His critics chastise him for saying that outlawing intermarriage will curb immigration and solve a lot of the Danes” problems, but they won”t say which part of that hypothesis is inaccurate.

To reduce it to hillbilly simplicity: Have a helluva lot of Muslims been marrying they first cousins? Has this been going on for hun”rids and hun”rids of years? Is this bad for ya? Do said negative effects get asymptotically more severe as the generations multiply? Sennels’s data seems to prove the answer to all these questions is an irrefutable “Hell, yeah.”

The irony is, whether they like it or not, the Muslim population needs to see this data. If they threw out the inbreeding, their health, education, culture, and ultimately, their religion would prosper.

This brings up a root problem that Manji’s been screaming about for years: Islamic closed-mindedness. She claims this has damaged the religion far more than bikinis and rap and guys in spandex leotards making out with each other”and she’s right.

Look, I know Muhammad said he was the last prophet and “no prophet or messenger will come after me and no new faith will emerge.” And I know he said it was OK to marry your first cousins. But he also said a flying donkey lady took him to outer space.

It may seem blasphemous, but what’s best for Islam (and everyone) today is information. Turning a blind eye to so-called Islamophobes such as Sennels and Manji is a lot bigger threat to the Middle East than Western culture is. I don”t expect this religion of peace to give peace a chance, but would it kill them to at least give scientific data the time of day? No, it would not. In fact, it would kill them not to. So in the words of Larry the Cable Guy, “Git-R-Done!”