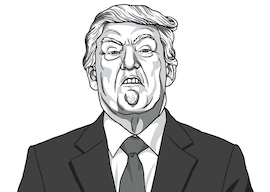 Menachem Schneerson was the beloved leader of the Lubavitcher sect of Hasidic Jews. So esteemed was this New York-dwelling rebbe that many of his followers believed he was the long-awaited Jewish messiah, and that after death he’d rise in triumph and lead the Jews to a promised land where the brisket is never dry, the yentas are prettier than the shiksas, and Seinfeld airs 24/7. Unlike that other messiah, Schneerson was not crucified while wearing a crown of thorns. No, this messiah was sent heavenward by a stroke, and at the time of his passing in June 1994, his loyal minions gathered at the Manhattan hospital where he died, anxiously awaiting his glorious return.

That was 25 years ago, and some are waiting still.

This is you, Trump loyalists, still talking about “4D chess,” and how your Fearless Leader is just about to arrest Hillary and Obama, drain the swamp, deport all illegals, rein in amnesty, put an end to anchor babies, and, of course, build the wall. Look at the Lubavitch faithful today, and that’s gonna be you in 25 years. Trump will be dead, the statute of limitations on Hillary’s crimes long expired, and the U.S. a white-minority nation, and you’ll still be telling yourselves that the messiah Trump is about to rise and pull the trigger on the master plan that will set everything right. “His death was all part of the ruse,” you’ll be saying, “to throw the swamp off his trail! What a master strategist! That’s called 5D chess” (I wrote that part a week ago as an example of comedic exaggeration, but just today I read a tweet from a pro-Trump author suggesting that Trump is secretly behind the college admissions cheating investigation, as a way to “pull the rotten tree up at its roots—the colleges,” thus planting the seeds of the “Deep State’s” destruction long after he’s gone from office).

Look, I actually feel bad writing this column, because on a personal level, I like a lot of the people who still think Trump’s “just about to” put his master plan into action. These are some very decent people, but they’re acting like dopes.

It’s not that Trump has been a failed president. What he’s failed at is being the president he promised to be. Yeah, the economy is doing well (although not necessarily for all of the blue-collar workers who voted for him), and he got a tax reform bill passed. But if you examine the list of achievements distributed by the White House prior to the State of the Union address, you’ll see that most of those accomplishments would have occurred under just about any GOP president. Immigration was the one thing that separated Trump from the other low-taxes, business-friendly candidates in the primary, and on that issue, he got outfoxed by the swamp careerists and the quislings he surrounded himself with. And that’s on him.

Ann Coulter has taken a great deal of heat recently for pointing out an uncomfortable truth: What Trump failed to do in the past two years, he will be unable to do in the next two, what with not having the House, and with his own house severely disordered. In the Clive Barker novella Rawhead Rex, the eponymous pagan god proves his dominance by pissing in the mouths of Christians. And what did the swamp hacks and neocons do if not baptize Trump with a golden shower on issues ranging from immigration to military pullouts? They have for the most part gotten their way, because they get the fact that tweets don’t equal accomplishments (I’m not entirely convinced Trump understands this). They can also recognize a man out of his league. Trump’s in their house, and they know every square inch of it because they live there.

I don’t necessarily think Trump’s an out-and-out huckster, but he’s weak. Wait, you mean the loudmouthed braggart who bleated endlessly about his mighty strength turned out to be a wimp? Not since Michael Corleone told his dad, “I’m never gonna join the family business” have I been less surprised by a plot twist.

“It’s not that Trump has been a failed president. What he’s failed at is being the president he promised to be.”

Coulter gave Trump every chance, but she’s just too damn smart to playact. She’s no bubble-brained bimbo (that position is already filled by Sean Hannity), and she’s not interested in feeding her readers sweet, comforting nothings. If Trump ever does get his act together, she’ll be the first to congratulate him. But, as she told me last week, all that remains is for Trump’s supporters to start holding the man’s feet to the fire, as she’s trying to do. The acolytes who claim that his inaction is all part of some grand strategy are not helping. We all remember the elation of November ’16, when we partied to videos of weeping Democrats. Party’s over, dudes. That victory will mean nothing without actual accomplishments.

There was Trump last week, vetoing the congressional attempt to block his national emergency declaration regarding the border. And there were the “Angel Moms,” miraculously allowed back in the White House. What do you think spurred Trump’s renewed action on his No. 1 campaign promise? Hannity’s obsequiousness, or Coulter’s relentless pressure? Of course, Trump should have done this two years ago, as, at the moment, the inevitable legal challenges to the declaration will likely still be ongoing in 2020.

Speaking of 2020, Trump will obviously run on the economy. He can’t run on “make Mexico pay for the wall,” “deportations day one,” or “lock her up.” But he has the economy. Political hacks love to regurgitate catchphrases, because part of pretending to be an expert is claiming to know “the rules.” “It’s the economy, stupid.” In 2020, expect to hear Trumpers repeat those words endlessly, like Clara Peller in 1984 screeching about missing beef. As long as the economy’s strong, so the argument goes, an incumbent will always win reelection. What the professional regurgitators conveniently forget is that misshapen monster James Carville coined the “economy, stupid” phrase in 1992 because Republicans at the time were smugly proclaiming that it would be impossible for a victorious wartime president (indeed, one who “exorcised the ghosts of Vietnam”) with a popularity rating of 90% the previous year to lose. “Presidents who bring military victories win reelection,” we were told. “That’s the rule.”

Well, that rule was shattered in November ’92, and the new rule, “It’s the economy, stupid,” became the replacement cliché. Republicans in 2019 are just as certain that this rule is unbreakable as they were in ’92 about that rule being unbreakable. Pride goeth before the fall election. To be clear, I’m not predicting Trump will lose. I gave up such predictions after taking a bath on wagers in 2016. The Democrats have their own problems (a far-left insurgency, and an activist base obsessed with identity politics), and they’ll probably end up running someone as unwinnable as Hillary. All I’m saying is, in American politics, “unbreakable rules” are routinely supplanted by new unbreakable rules.

One of the most alarming harbingers of bad times to come for the Trump train is this: If you look at the most serious Democrat losses of the past two years, you’ll see that these high-profile Dems were taken out not by Republicans, not by Trump, but by other Democrats and leftists (especially the #MeToos). Franken, Conyers, Schneiderman, Esty, and now potentially Ralph Northam and Justin Fairfax. When it comes to Dem losses, the GOP catchphrase should be “We didn’t build that.”

You know you’re in trouble when your enemy’s main casualties are self-inflicted…when you literally have to count on your opponents to take themselves out.

But it’s been difficult for many Trump disciples to admit the man’s failures. In a way, Trump is the presidential equivalent of a spousal abuser. He’s a lousy “husband.” He fails at keeping the promises he made on the wedding day. But every time you try to leave, he says all the right things to win you back. Hell, I’ve fallen for that with Trump. Every Twitter slam against CNN, every tweet about “low IQ” Maxine Waters, will momentarily make me forget that he’s (at best) dragging his feet on immigration, and (at worst) flat-out breaking his promises. The man knows what words to use to soothe his base, but that’s the problem; in the end, they’re just words. And many stay loyal to the man because, like a 40-year-old married woman with four kids and the body to show for it, “Who’ll take me in if he leaves? I’m too old to start again!”

Having already overloaded this piece with entertainment references (I think I should win a special literary award for working Rawhead Rex, The Godfather, and Clara Peller into a Trump column), I’ll close with one more. What Trumpers are experiencing right now is the “Tell-Tale Heart” “groan moment.” In Poe’s story, this occurs when the incipient victim is forced to face his dire reality. It’s the moment when he has to come to terms with his worst fear:

Presently I heard a slight groan…. His fears had been ever since growing upon him. He had been trying to fancy them causeless, but could not. He had been saying to himself—“It is nothing but the wind in the chimney—it is only a mouse crossing the floor,” or “It is merely a cricket which has made a single chirp.” Yes, he had been trying to comfort himself with these suppositions: but he had found all in vain.

For two years now, Trump loyalists have been trying to convince themselves that every lost opportunity, every defeat, has been part of some grand plan. “We’re not losing; Trump is merely luring his foes into a trap.”

The dude’s got less than two years to spring that trap. Maybe it’s finally time, no?

And don’t pull that old “but would you have preferred Hillary” bullshit. That’s neither here nor there. It’s not treasonous to demand that Trump fulfill the promises he ran on. It is, however, moronic to remain in a state of November 2016 euphoria, like children who want to live perpetually in Christmas Eve because the presents they opened on Christmas morning didn’t live up to their expectations.

Trump needs a grassroots base that is willing and able to face reality and hold his feet to the fire, especially as he has such little support for his agenda from within his own White House. He needs an activist base that dispenses with the “4D chess” and “god emperor” crap from 2016, and instead demands results.

Can the base rise to the occasion? That’ll be the focus of part 2 next week.