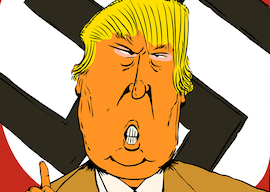 I mean, if Trump is Hitler now, can you imagine how Hitlery he’d be if he’d actually done more than merely continuing the policies of previous administrations (Kids in cages! Separation of families!)?

Last week, “historian” Jon Meacham, who is one prize putz (I mean, he won a Pulitzer Prize), declared that, based on his “research” (which probably included paint-huffing), Trump is now tied with Andrew Johnson for the title of “most racist president in American history.” Meacham bases this sound appraisal not on Trump’s actions, but on his “racist Twitter tirades” and “statements.”

In other words, words.

Well, that’s not insane at all, Meacham! I’d totally trust you to guard the company bee.

But just how bad can a Hitler be if his crimes are merely rhetorical? I mean, if Trump’s evil consists entirely of words, he must be really bad at Hitlering.

Bear with me on this one.

Unlike Johnny Meacham, Hans Mommsen was a bona fide, competent historian. Politically to the left, he was an exceptionally important and innovative voice in the field of World War II history from the 1960s onward, and his impact is measured not, as a fraud like Meacham would be content with, by kudos from the ideologically like-minded, but rather via the fact that, over the decades, he was lauded equally by those on the left and right, even to the point of actually winning over many of the historians who initially disagreed with his thesis.

He was an original thinker—a revisionist in the very best way—who buttressed his arguments with facts and logic instead of Meacham’s lazy brand of ideological morphine for true believers.

So what was Mommsen’s main thesis? That Hitler was a “weak dictator.” That Hitler (and please understand that I’m painting with a broad brush here for the sake of brevity) was all talk. Lots and lots of talk. Man, did that cat love to talk. But as much as he loved yapping, he hated doing the scut work. He was a dreamer, a bloviator who shunned micromanaging.

Meanwhile, as Dolfy dreamt, his loyal minions went about bringing his grandiose visions to life.

“If you’re going to make a Trump/Hitler comparison (a cottage industry on the left these days), do it right.”

If there’d been a Twitter in the 1930s, Hitler would have been all over it. Considering his innovative use of then-cutting-edge mass media to communicate with the public, a 24-hour megaphone like Twitter would have been irresistible to the man.

Hitler’s chattiness was often his own undoing. When the Nazis began offing tards during the so-called “T4” euthanasia program of the late ’30s, his shameless braying (coupled with that of his deformed lapdog Goebbels) drew the attention of members of the German clergy, who pressured Hitler to end the unholy “aktion.” On the other hand, the Scandinavian nations, which undertook the same damn policies at the same damn time but quietly, continued sterilizing veggies straight into the 1970s. As a result, Denmark (which, back in the ’30s, had as its national motto “Like Germany, but with an indoor voice”) to this day has one of the lowest rates of tardism in the world, while Germany these days is, well, pretty top-heavy with tards.

Damn blabby Hitler. Indeed, his compulsive lip-flappery haunts him to this day. In the 1930s, Hitler had a bad habit of threatening to annihilate the Jews, most famously during a speech to the Reichstag in January ’39, in which he straight-out threatened the extermination (“vernichtung”) of Europe’s Jews should war break out. The thing is, though, he actually had no plans to do any Jew-exterminating at the time. In fact, he was still pursuing a policy of forced emigration and resettlement. And even when war did break out, Hitler still spent two years pursuing nonlethal “Final Solutions.”

That 1939 Reichstag speech was a Trump tweet: all bluster, with no solid plans to back it up.

As renowned Holocaust historian Christopher Browning points out in his excellent book Fateful Months, Hitler’s penchant for loud, obnoxious overstatement poses a problem for historians. Hitler was a “conscious political actor—one who could publicly threaten the Jews with destruction in 1939 and privately mention expulsion as late as January 1942.”

By the time the actual mass murder of Jews began, and Himmler, Globočnik, and the like slapped a gag order on the affair, the silence was fooling nobody. Hitler’s bombast when Jews were not being killed overshadowed the official silence when they were.

The late German historian Martin Broszat, another highly respected advocate of the “weak dictator” theory, went so far as to say that Hitler’s rhetoric inadvertently (that’s the key word there) caused the Holocaust. As summarized by Mommsen in a 1987 essay, Broszat’s thesis was that “utterances by Hitler that stood in a primarily propagandistic context were taken by the party radicals at face value. What was meant metaphorically thereby became actual policy.” In other words, Hitler tweeted out of his ass, and his loyal underlings took the mad tweets and made ’em real.

Seminal Holocaust historian Raul Hilberg, initially a skeptic of, and then a convert to, Mommsen/Broszat “functionalism,” would eventually cede that, far from being the result of “central organization” by Hitler, the Holocaust developed because of “consensus mind reading” by bureaucrats trying to “comprehend” Hitler’s desires.

Now, I hate adding caveats to my essays, because I write for adults, and adults shouldn’t need to be spoon-fed, but for the record, no, I don’t equate Trump with Hitler, and no, I’m certainly not equating Trump’s election-year rhetoric regarding immigration (which was nothing more than a very blunt and inartful restating of commonsense policies even Democrats used to support) with killing Jews. I’m just sayin’, if you’re going to make a Trump/Hitler comparison (a cottage industry on the left these days), do it right. Both men loved bombastic oratory; both men preferred bombastic oratory to the boring, detail-oriented business of getting a job done; and both men have had their ships sunk by their own loose lips (in Trump’s case, note how the courts have used his own rhetoric against him in rulings that halted the “Muslim ban” and the census citizenship question).

If Mommsen and Broszat are correct, there’s one key difference between blabbermouth Trump and blabbermouth Hitler: the character of the people they surrounded themselves with. Hitler’s flunkies and bureaucrats took his rants and made them happen. Trump’s ignore his rants and pursue their own often contradictory agendas.

Hitler and Trump, two ass-talkers, one with fanatically loyal minions, and the other with minions who are at best self-serving and at worst saboteurs. It’s indeed too bad that the circumstances were not reversed. There might never have been a monstrosity called Treblinka, and today the U.S. would be several million illegals lighter.

Now, whereas the Holocaust did happen, and there’s proof of it beyond Hitler’s empty threats of the ’30s, Trump’s hurty words are the only proof of his “Holocaust,” because, let’s be honest, the man hasn’t really done shit in terms of carrying out his campaign promises regarding immigration. That’s why a dimwit like Meacham has to rely on Trump’s rhetoric to make his “most racist president” case. Words are all he has to work with! There are precious few actual actions to take into consideration. But Meacham, like Trump, is a man of the times. And in these times, words are seen as actions.

Social media is nothing but a war of words, yet how many of us feel like we’ve accomplished something concrete by “destroying” a foe on Twitter or Facebook? Leftists straight-out claim that “words equal violence” and “hate speech” equals “literal genocide.” And rightists are conditioned (because of leftist censorship) to see “power” in words beyond any power they actually possess. When the simple act of typing a “forbidden” word can get you banned, deplatformed, and fired, that simple act becomes a revolutionary accomplishment that transcends mere rhetoric.

When in fact absolutely nothing happened. Nothing but words. It’s a playacted Holocaust, a “the floor is lava” genocide that only exists because we’re all buying into the false reality of the game.

I used to laud Trump for his “brave” rhetoric. And yeah, telling a gaggle of Democrat harpies of color to “go back” to the “broken and crime infested places from which they came” is, without question, the “draw Muhammad” of present-day America (as is speaking disrespectfully to a tenured landfill custodian like Elijah Cummings). But that’s the problem. We’re so under the thumb of the left in terms of what we can or can’t say to or about “protected groups,” we’re forced to live vicariously through a president who is “allowed” to say things we can’t. But when Trump’s gone, we’ll have profited…how? We’re silenced now, we’ll still be silenced then.

So I don’t cheer Trump’s “audacious” words anymore. Put up or shut up, scare-quote “Hitler.” SCOTUS just freed up some border funds. Either start doing things or button it, Schicklgruber…I mean, Drumpf!

Unlike the VR cosplayers who get off on the Kabuki theater, I’ve grown bored by it. Plus, it’s way too predictable to hold my interest. There’s little mystery where this is heading. Long after Trump leaves office, his empty rhetoric will, like Hitler’s empty 1939 “extermination” pledge, live after him as “proof” of his (virtual) Holocaust. And the oppressed (but totally not oppressed) people of color who “lived through” the terror will consider themselves “survivors” (albeit ones who were never for a moment in physical jeopardy). Think I’m exaggerating? If AOC can claim to have battled Nazi rapist border guards in order to “force herself” into the cell of a woman being subjected to “psychological warfare” by being brutalized into drinking toilet water, and if she can spin that yarn and keep her job, mark my words: Within the next decade, we’ll get two dozen brown Democrat congressional candidates who claim to be “toilet water death camp” survivors.

If you think the virtual Holocaust is bad now as it’s (not) happening, wait until Trump’s out of office and the “never forget (what never happened)” phase begins.