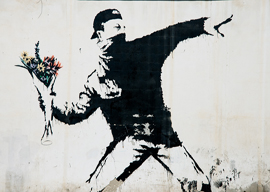 I”m in Israel right now doing a talk in Tel Aviv called “Trump in Israel” and I”m going on a fact-finding mission sponsored by my Jew boss Ezra Levant. Israelis don”t like Trump and I find it incredibly frustrating. I keep telling them, “The only child of Donald Trump not having sex with a Jew right now is the 10-year-old.” Trump’s daughter converted to Orthodox Judaism and he’s hired her yarmulke-wearing husband as a senior advisor. He’s discussed moving the embassy to Jerusalem as a show of solidarity. The wall is the best thing that ever happened to Israel and they roll their eyes when you talk about Trump doing the same. They don”t even like theirs. Col. Dan Tirza was the strategic planner behind the entire project (they call it the “Security Barrier”) and he was recently featured in Forbes as the expert Trump should be talking to. He brought me to a checkpoint where they”ve caught 20 pipe bombs this year. It wasn”t even a particularly busy checkpoint. There were hundreds of terror attacks in the years leading up to the wall that killed thousands of Israelis. A busful of children going to school was attacked by a suicide bomber and 19 were killed. Since the wall, terrorism has all but ceased to be. What’s there not to love?

“It’s only psychological,” Oded Revivi told me, “It doesn”t get to the root of the problem.” Revivi is the mayor of a settlement village called Efrat that has no wall and plenty of terror. He is optimistic about a symbiotic relationship with Palestine and I couldn”t disagree more. Revivi regularly goes to Palestinian leaders” homes, and decided to take a risk and invite them to a party at his house. When the Palestinian authorities found out (through social media), Revivi’s guests were jailed. Time to give up, Oded. It’s funny because the people we”re meeting are almost exclusively pro-Israel, but I”m coming away from each meeting disappointed with Israel. They have the same disease the American Jews do. They are suicidally liberal. Christians are also guilty of this sin.

“Since the wall, terrorism has all but ceased to be. What’s there not to love?”

I love the wall and see it as a work of art. Even the cement part (which is only 5%) is a beautiful example of what man can create. It’s nine meters tall and has all kinds of tunnels and gates to incorporate the various religious ceremonies that Jews, Muslims, and Christians have. I even think the Palestinians like it. I believe they subliminally see it as tough love from a mean but fair patriarch. It shows strength and that’s the only thing the Muslims in this area revere. They”re like the Druze. They have survived because they always side with the winners. When the Arab world is thriving, they side with the Arabs. If the Jews are winning, they side with them. They live on both sides of the line, literally. These people are not impressed by fairness and morality. They see it as a weakness.

Street artist Banksy has a big art piece in Bethlehem right now called Walled Off Hotel to showcase how horrible it is for the Palestinians to be kept out of Jerusalem. Isn”t hating a wall proof that you want to be on someone else’s land? When Vicente Fox told Trump, “We”re not building your fucking wall” and ranted about how evil it was, he was admitting that the Mexican government sees illegal immigration as a handy way to get rid of criminals. He was conceding that committing an illegal act is crucial to their way of life. Palestinians want to cross over the wall because their town sucks and their town sucks because they ruined it. In the past ten years, Bethlehem has been completely taken over by Muslims. My tour guide couldn”t go there because it’s illegal for Israeli citizens to enter the neighborhood (I saw a red sign in English that said exactly that). There are a tiny handful of Christian families left who live near the Nativity church, but their doors are covered with posters pledging allegiance to various Muslim martyrs. If these Christians were to take down these posters, there”d be a knock on the door from Hamas and serious repercussions until they were put back up. This culture deserves to be walled off. While artists virtue-signal for the PLO, the rest of us should be taking back Bethlehem. Where are our fellow Christians in this mess? Where are they in Egypt and everywhere else Christians are being crucified? In America, Trump’s notion of giving Christian refugees preferential treatment gets eye-rolls from the media and is mocked with flippant remarks like “You”re not a refugee if you don”t think like me.” They”re mocking our bigotry, but it’s not such a bad idea.