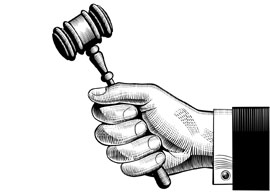 “Disheartening and demoralizing,” wailed Judge Neil Gorsuch of President Trump’s comments about the judges seeking to overturn his 90-day ban on travel to the U.S. from the Greater Middle East war zones.

What a wimp. Did our future justice break down crying like Sen. Chuck Schumer? Sorry, this is not Antonin Scalia. And just what horrible thing had our president said?

A “so-called judge” blocked the travel ban, said Trump. And the arguments in court, where 9th Circuit appellate judges were hearing the government’s appeal, were “disgraceful.” “A bad student in high school would have understood the arguments better.”

Did the president disparage a couple of judges? Yep.

Yet compare his remarks to the tweeted screeds of Elizabeth Warren after her Senate colleague, Jeff Sessions, was confirmed as attorney general.

Sessions, said Warren, represents “radical hatred.” And if he makes “the tiniest attempt to bring his racism, sexism & bigotry” into the Department of Justice, “all of us” will pile on.

Now this is hate speech. And it validates Majority Leader Mitch McConnell’s decision to use Senate rules to shut her down.

These episodes reveal much about America 2017.

“That a district judge would overrule the president of the United States on a matter of border security in wartime is absurd.”

They reflect, first, the poisoned character of our politics. The language of Warren—that Sessions is stepped in “racism, sexism & bigotry” echoes the ugliest slander of the Hillary Clinton campaign, where she used similar words to describe Trump’s “deplorables.”

Such language, reflecting as it does the beliefs of one-half of America about the other, rules out any rapprochement in America’s social or political life. This is pre-civil war language.

For how do you sit down and work alongside people you believe to be crypto-Nazis, Klansmen and fascists? Apparently, you don’t. Rather, you vilify them, riot against them, deny them the right to speak or to be heard.

And such conduct is becoming common on campuses today.

As for Trump’s disparagement of the judges, only someone ignorant of history can view that as frightening.

Thomas Jefferson not only refused to enforce the Alien & Sedition Acts of President John Adams, his party impeached Supreme Court Justice Samuel Chase who had presided over one of the trials.

Jackson defied Chief Justice John Marshall’s prohibition against moving the Cherokees out of Georgia to west of the Mississippi, where, according to the Harvard resume of Sen. Warren, one of them bundled fruitfully with one of her ancestors, making her part Cherokee.

FDR proposed adding six justices to emasculate a Supreme Court of the “nine old men” he reviled for having declared some New Deal schemes unconstitutional.

President Eisenhower called his Supreme Court choices Earl Warren and William Brennan two of the “worst mistakes” he made as president. History bears Ike out. And here we come to the heart of the matter.