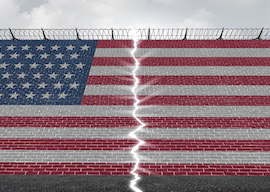 For those of us who were ecstatic the night Donald Trump was elected president, who watch election night videos over and over again, it used to be easy to defend him against the charge that he is just a BS-ing con man who would say anything to get elected.

Trump was our last chance. But he’s spent two years not building the wall, not deporting illegals — “INCREDIBLE KIDS!” — and not ending the anchor baby scam.

Within 10 seconds of Trump’s leaving office, there will be no evidence that he was ever president. Laws will be changed, executive orders rescinded, treaties re-written and courts packed.

Trump will leave no legacy at all. Only a wall is forever.

We had no choice. No one else was promising to save America.

“On day one, we will begin working on an impenetrable, physical, tall, powerful, beautiful southern border wall. We will use the best technology, including above- and below-ground sensors, that’s the tunnels. Remember that: above and below. Towers, aerial surveillance and manpower to supplement the wall, find and dislocate tunnels and keep out criminal cartels …”

But then he signed a spending bill expressly prohibiting him from building any part of the wall.

— President Trump, after signing a spending bill that blocked any funding for a wall.

Today, eight months later, Trump is about to sign another spending bill that will give him no money for the wall.

Anyone want to bet me that he won’t?

So much for the world’s greatest negotiator.

“If Trump doesn’t keep his immigration promises, Hillary might as well have won.”

Donald Trump is the commander in chief. He doesn’t need Congress’ approval to defend the nation’s borders.

But as long as his excuse for not building the wall is that Congress hasn’t appropriated money for it, why on earth would he sign a spending bill that doesn’t give it to him?

There is no tomorrow on this. Republicans are about to lose the House. It’s now or never.

We didn’t need someone to tell us how hard it is to get anything done in Washington. We knew that.

That’s why we hired a builder. We didn’t care what Trump’s position on the lira was. We didn’t care about Syria. We were just looking for the best contractor we could find so we would finally get a wall.

If we were talking about a golf course in Scotland, I think Trump could figure out how to get it done.

But instead of winning, we’re getting whining. We’re told it’s Congress’ fault for not giving Trump money to build the wall! The ACLU will sue! A judge will stop him! Blame Paul Ryan! (Possible Trump epitaph: Chuck wouldn’t let me!)

President Reagan bombed Libya in retaliation for two U.S. serviceman being killed by a bomb in a West Berlin discotheque — TWO!

But Trump thinks he needs the preapproval of Congress, the ACLU and a district court judge in Hawaii to do something about tens of thousands of Americans being killed every year by illegal alien heroin dealers, drunk drivers and straight-up murderers.

Reagan invaded Grenada because the country was becoming a Soviet client state. No Grenadian threatened to touch a hair on any American’s head. One wonders what Reagan’s reaction would have been to someone telling him, YOU CAN’T DO THAT! THE ACLU WILL SUE!

If Reagan had Trump’s advisers, we’d be speaking Russian.

The ACLU, the Center for Constitutional Rights, the Southern Poverty Law Center and the other anti-American groups opposing Trump on immigration were the very same groups that opposed Reagan. They would have been happy if the U.S.S.R. had nuked this country.

Sadly for them, Reagan kept his promises, and we won the Cold War. So now the back-up plan is to destroy our country by flooding it with the Third World.

We needed Reagan and got P.T. Barnum instead.

Evidently, Trump knew he could bomb an innocent country based on false information about the Syrian government using nerve gas in April 2018. (Actual reason: Ivanka cried.) No less than the Organisation for the Prohibition of Chemical Weapons spent months testing the bodies allegedly killed by nerve gas. Conclusion: No nerve gas.

But we’re supposed to believe that Trump doesn’t realize that he’s also allowed to defend the citizens of this country. Does he know he’s president?

Even if noted constitutional law scholar Jared Kushner has convinced Trump that he needs congressional approval before he’s allowed to repel invaders at our border — but doesn’t need Congress to bomb an innocent country because Ivanka cried — the president could order the troops to invade Mexico and build the wall 10 yards in.

But all we get are bombastic tweets and useless half-measures. The conservative media have been excitedly reporting that Obama put illegal alien kids in cages too! Obama used tear gas on the invaders too!

Yes, exactly — and none of that worked. That’s why we voted for the guy who promised to build a wall.

Unlike the president, we knew that the deluge of poor people flooding our country would never stop until we had an impenetrable border.

And whatever happened to that executive order on anchor babies? Is Trump “trying” to sign that, too? Maybe he got writer’s cramp.

Trump also promised to deport illegals — even the ones Democrats have given cute names to.

“We’re always talking about ‘Dreamers’ for other people. I want the children that are growing up in the United States to be dreamers also. They’re not dreaming right now.”

“The executive order (on “Dreamers”) gets rescinded.”

Is it Paul Ryan’s fault that Trump did a 180 on “Dreamers,” called them “INCREDIBLE KIDS” and tried to give them amnesty?

Every day that Trump does not keep his promises on immigration, thousands of immigrants turn 18 and start block voting for the Democrats, while thousands of traditional Americans die off.

Florida and Texas are about five years away from turning solid blue. Trump was our last chance. After this, the country is never going to elect a Republican president again.

So the next time you watch one of those election night videos, remember: If Trump doesn’t keep his immigration promises, Hillary might as well have won.

Trump will leave no legacy whatsoever. Without a wall, he will only be remembered as a small cartoon figure who briefly inflamed and amused the rabble.