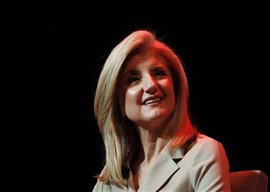 The Internet is one of the most obvious signs of the Brave New World in which we all dwell. What began in the 1960s as a humble linking of two computers via cable has mushroomed into a revolutionary phenomenon that has transformed the world’s economic, social, and intellectual life. But to effectively utilize this vast Sargasso Sea of information, goods, and services, one needs a means of navigation—so such companies as Google and AOL (America Online) were born. These and many other such companies soon acquired a great deal of economic power—they have always reminded me of the Spacing Guild in Dune. AOL in particular has specialized in providing a wide range of Internet services.

“If an ideologically slanted ‘information trust’ is indeed developing, how best to combat it?”

While the Internet was growing, so was the career of a lady from Greece, Arianna Huffington. In general, I am a fan of British-educated Greek editors of Internet magazines. But Mrs. Huffington has blazed through our times (and the love lives of the great and near-great) like a latter-day Beryl Markham. One hardly knows what to make of her spiritual and religious zig-zags, save that—after her right-wing interlude with ex-husband and current gay activist Michael Huffington—she seems settled as an “independent progressive” in politics and retains some interest in the Movement of Inner Spiritual Awareness. When she became ensconced comfortably on the left, the redoubtable lady started The Huffington Post. This online collection of news and blogs features not only the musings of its editrix and various left-wing notables, but also the work of some 9,000 bloggers in various fields.

Up to this point, Mrs. Huffington’s career, with its numerous self-reinventions, was beautifully Californian. At the head of a determined corps of writers working for the causes they believed in, Arianna was a shining star for her ideological tribe. Alas, her halo was doomed to be tarnished. AOL announced on February 7, 2011 that it was buying The Huffington Post for $315 million. Not only would the lady pocket the cash, she was made president and Editor-in-Chief of The Huffington Post Media Group, comprising The Huffington Post and AOL properties PopEater, Engadget, Patch, TechCrunch, MapQuest, Moviefone, Black Voices, AOL Music, AOL Latino, AutoBlog, and StyleList. Understandably, a very large part of the unpaid 9,000 upon whose talent Mrs. Huffington had built her empire were anxious to get some of the money, and in April they launched a multi-million-dollar lawsuit.