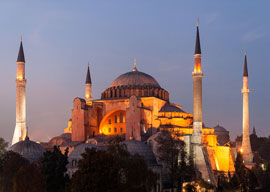 Turkey is no longer a secular society. In less than a decade Prime Minister ErdoÄan and his Justice and Development Party have effected a radical change in Turkey’s political dynamic that has occurred largely without notice by most casual Western observers.

In the past month alone Turkey has: 1) expelled Egypt’s ambassador to Turkey in protest of the coup that replaced the Muslim Brotherhood; 2) encouraged “morals enforcement” that lurches toward sharia law; and 3) publicly announced it is ready to forgo joining the European Union to instead be included in the Shanghai Cooperative.

Only two sorts of reporters tell the truth: those wealthy enough not to be threatened by firing and those poor enough to take the risk. Ernest Hemingway (at least early in his career) was among the latter, and his observations on the European scene immediately after the Armistice are invaluable.

Among the most interesting accounts involve the Greco-Turkish War of 1919-1922 and first-person descriptions of the Asiatic leader himself. Kemal AtatÃ¼rk was the man who, after victory, almost by force of will alone dragged Turks into the modern era. His belief was that for his people to modernize they must Westernize. His character is similar to that of Peter the Great of Russia, although he apparently didn’t hate beards quite as much as Peter did.

“Only two sorts of reporters tell the truth: those wealthy enough not to be threatened by firing and those poor enough to take the risk.”

Turkey has always been peripherally European: first as seat of the Eastern Roman Empire, then as “sick man” of the continent, and finally with its decision to institute liberal reforms.

But why talk Turkey now? The secret is in the ingredients; or rather, the relentless increments by which that nation has steadily and to some extent stealthily transitioned itself from an AtatÃ¼rk republic into what can be described as a marginal theocracy.

Revolution has been far from unknown in the country (there having been three since 1960). However, for generations such occurrences were marked for maintaining authoritative secularism, even if at the loss of some democratic forms. As recently as 1997 a military insurrection ousted another politically Muslim administration. Throughout, these incidents reaffirmed Turkish allegiance to general Western principles.

Nonetheless 2003 witnessed a failed insurgency involving over three hundred military officers, including ranking chiefs of the air force and navy, against what is widely perceived as an Islamist regime led by Prime Minister Recep Tayyip ErdoÄan. As consequence of the subsequent entrenchment any who have not fixated their attention on the country this past decade will be startled by its expansive conversion.

The Justice and Development Party (JDP) labels itself center-right and socially conservative. It is the largest party in the nation with 327 members of parliament as well as office of the prime minister. JDP was founded in 2001 and since then has consistently garnered approximately 50% of the popular vote.

During this time ErdoÄan as its leader has reinstituted the headscarf while abolishing requirement for the pledge of allegiance in schools (which praised AtatÃ¼rk principles). The government introduced bans on public kissing and restrictions on the sale of alcohol that have recently gone into effect. For the future there are plans to reorganize the parliamentary structure in favor of a presidential scheme.

In international affairs Turkey now supports the Syrian rebels, who are conceded to be largely composed of former al-Qaeda members and other Islamic extremists. Istanbul strongly protests the coup that removed Morsi and his highly orthodox Muslim Brotherhood from power in Egypt. Additionally, there is ominous realignment away from Israel and toward Iran.

Facing increasing resistance from moderates, ErdoÄan has coopted various sects promising them individualized education and services while in the process further fragmenting Turkish society. The native Muslim Brotherhood is to be granted privileges in administering government-owned mosques and other religious properties.