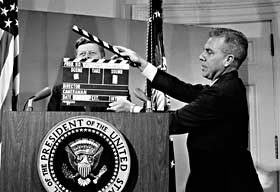 Putting that aside, the most important question for the average American would be: How does the modern primetime network TV lineup differ from that of 50 years ago?

I don”t own a TV”yes, I’m one of those people”so most of what I’ll say about today’s fare will be based on inferences drawn from online synopses. I couldn’t even bring myself to watch sample clips on YouTube”I’m usually willing to bleed for you, dear readers, but there are some things I simply won’t do. Eating live insects is one. Watching modern TV or movies is another. We all have our limits.

I was a mere 29 months old when JFK got capped in the bean”like all good Catholic families in my neighborhood, we had pictures of JFK and Frank Sinatra displayed prominently in the house”yet it’s frightening how many shows from the 1963-1964 network television schedule I still remember. It was eerie to go back 50 years and crack open my musty memory vaults to witness images that have been filed away since I was in diapers”haunting sequences such as the scary silhouettes running amid shadows in the intro to Kraft Suspense Theatre or the “We are controlling transmission” opening narrative to The Outer Limits.

In the Nielsen ratings, so-called “rural sitcoms” reigned supreme for the 1963-1964 season, notching three of the five top-rated shows: The Beverly Hillbillies, The Andy Griffith Show, and Petticoat Junction. Even though there was a mocking undercurrent to the nation’s #1 show, The Beverly Hillbillies, it was clear that Jed Clampett was a better man than Mr. Drysdale. And although everyone suspected it, Miss Hathaway did not dare browbeat anyone with her obvious lesbianism. This was back when rural white Americans were still deemed to be the nation’s backbone rather than either tea-bagging enemies of the state or demoralized food-stamp sucklings. Whereas back then we had the apple-cheeked and presumably super-fertile girls of Petticoat Junction, now we have the brain-dead lumps of trans fats gleefully passing gas on the cable hit Here Comes Honey Boo Boo.

“Judging solely from television lineups, the biggest cultural shift since 50 years ago has been the obliteration of the nuclear American family.”

Many of the shows back then evinced an innocent wholesomeness so sweet, you’d need a root canal. Americans have become far too jaded to swallow cathode-ray rock candy such as Lassie, Walt Disney’s Wonderful World of Color, Sing Along with Mitch, The Adventures of Ozzie and Harriet, and The Lawrence Welk Show. We have replaced the corny with the trashy and called it progress.

No one dares to smoke on TV anymore. No white man would dare play a bumbling Mexican named Jose Jimenez nor employ an obsequious black manservant named Rochester. And if there’s a woman on TV today who’s foxier than Suzanne Pleshette or Joey Heatherton, I haven’t seen her, but like I said, I don’t have a TV.

There were also entirely surreal shows in 1963 such as Mr. Ed and My Favorite Martian that would never be aired today. And this is back when pretty much the only person doing acid was Timothy Leary.

The only thing approaching the now ubiquitous “reality shows” was Candid Camera, which did the genre more justice than all the modern knockoffs combined. There were also tons of variety shows back then”The Ed Sullivan Show, The Judy Garland Show, The Red Skelton Hour, The Andy Williams Show, The Joey Bishop Show, etc.”and I’m not even sure the genre exists anymore. I think it died around when Carol Burnett tugged on her earlobe for the last time, but again, I wouldn’t know for reasons I”ve already discussed.

The main impression one gets from skimming the 1963 TV lineup is that the United States was still an empire in the exuberant process of expanding rather than apologizing. This was right before the Gulf of Tonkin incident and the subsequent humiliation in Vietnam, and shows such as Combat! and The Lieutenant portrayed servicemen more interested in winning wars than in appeasing the transgendered. And there were no lesbians in McHale’s Navy.

This was also back when conquering the American West was viewed as a matter of pride rather than penitence. The schedule was crammed with Western dramas such as Bonanza, Wagon Train, The Virginian, Rawhide, Temple Houston, Gunsmoke, the aptly named Empire, and The Travels of Jaimie McPheeters. In the latter show, a young Charles Bronson played a character named Linc Murdock, which may be the most macho name in world history”even more macho than fake names I’ve concocted such as Burt Sirloin and Strut Camry.