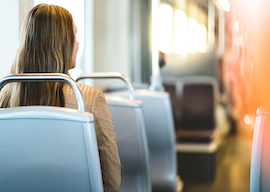 He (or she) who lives by Twitter dies by Twitter, so it seems, and it is best for your peace of mind to keep your immortal thoughts away from this pernicious medium altogether.

A publisher has just withdrawn the contract to publish a first book by a woman called Natasha Tynes because she posted an allegedly racist tweet about a worker on an underground train in Washington whom she had noticed eating her breakfast there, despite a law forbidding people to eat or drink anywhere on the system. She thought it wrong for employees to behave in a way forbidden to the public.

There was no reference in what she wrote to race, nor was there any racial slur in it, but a picture showed the woman who was eating to be black. A storm of protest followed, accusing Natasha Tynes of racism, though no evidence was offered of her having specially selected the employee in question because she was black. She was accused of wanting to deprive her of her job (presumably not very highly paid), again without any evidence. It seems to me more probable that she wanted the woman to be quietly reprimanded.

I am not myself much in favor of public denunciations of this kind, especially in a situation in which they are so easily made. In France and Germany under Nazi rule, millions of people denounced one another with a variety of unpleasant or downright evil motives. There is a pleasure in being nasty to one’s neighbors through the mediation of the authorities.

Some years ago the British government had the bright idea of encouraging people to denounce those whom they knew to be cheating the social security system, for example working while claiming unemployment benefits. The slogan used, the most unpleasant I can remember, was Rat on a rat. The poster promised anonymity to the informer.

“There seems to be an unslakable general thirst for apology, so long as it is extorted by vicious means.”

The fact was, however, that the system was tailor-made for fraud, and in my experience people who defrauded it rather than merely accepted its cold comforts passively saved their sanity thereby. At least they showed that they were still alive; they had initiative and were even entrepreneurs of a kind, in an environment in which practically all genuine entrepreneurialism—for example, by selling on a small scale—was closed to them by regulation. In England, if you set up a stall in the street to sell something, you will be apprehended quicker than if you rob your neighbor.

The invitation to inform appalled me, but I doubt that it was very effective in practice. Its intention, so it seemed to me, was to turn everyone into a ward of the state, to which we turn as the young child turns to a parent whom he considers omnipotent.

I cannot say, therefore, that I found Natasha Tynes’ behavior very attractive, and I wouldn’t have behaved like that myself, even if I had a Twitter account and even if the employee replied to me insolently when I drew attention in person to her breaking of the rules, as she replied to Ms. Tynes.

But the public response, or some of it, to what she did demonstrated the cultural and intellectual abyss into which we have fallen. A university professor, for example, tweeted in response, “Wow, you’re a f..king snitch,” an argument hardly couched in the language one might have expected of, or hoped for from, an educator of the young. The same professor claimed, without any foundation whatever, that Natasha Tynes had accused the worker of “eating while black.”

Worse was the response of the public relations firm that had been retained to publicize Natasha Tynes’ book. In explaining its decision to withdraw from doing so, it stated, “Black women face a constant barrage of this kind of inappropriate behavior toward them and a constant policing of their bodies.” The publisher of the book said, “We are working with our distributors to take the appropriate next steps.”

The implied demand of the original tweet that employees of the underground railway system obey the rules that apply to everyone else hardly constitutes the constant policing of black women’s bodies. On the contrary, it is more a demand for equality, that everyone should obey the same rules irrespective of race. (Natasha Tynes, by the way, was of at least partially Jordanian descent, but her job at the World Bank presumably more than canceled out her claim to be a member of an oppressed minority herself.) The real racism was that of those who believed that the accusation was that she was eating while black. Implied in this belief was that, by virtue of the hardships they endured, blacks were entitled to behave in any way whatever. The demand that they comply with the regulations imposed on others was racist.

It is impossible to say exactly what the empirical effect of this would be on the psyche of blacks in America, but in theory at least it is deeply degrading; for one makes such allowances for children, the senile, and the mentally deficient. In other words, it is the public relations company, no doubt preening itself on its moral grandeur, that is the racist in this situation.

As for the publisher, its announcement that it will take “the appropriate next steps” suggests that it is run by people with the soul of bureaucrats; and not only bureaucrats, but Soviet bureaucrats. It is enough, indeed, to make you wonder who won the Cold War. The words appropriate and inappropriate have now replaced right and wrong.

Natasha Tynes felt obliged by the storm of simulated outrage to apologize, with what degree of sincerity I leave it up to others to estimate. There seems in any case to be an unslakable general thirst for apology, so long as it is extorted by vicious means. Twitter and Facebook are Maoist organizations, and one wonders how long it will be before they require people who have expressed the wrong ideas to take selfies with themselves wearing dunces’ caps. We are going through our own form of Great Cultural Revolution.