Tweeting Our Way to Justice 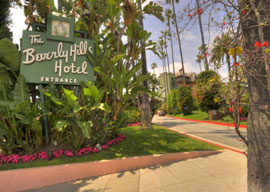 Whether or not it was Julie Burchill who described Stephen Fry as “a stupid person’s idea of a clever person,” it’s a finer quip than most of the labored “witticisms” ever delivered”with all the graceful, languid spontaneity of an overdue zoo elephant undergoing a C-section”by Fry himself.

Stephen Fry is, in fact, the very sort of person Stephen Fry would mock mercilessly, were he not already Stephen Fry. For example, he’s one of a clutch of celebrities calling upon rich people everywhere to boycott the luxury Dorchester Hotel chain.

(What is the collective noun of “celebrity,” by the way? A “giggle”? A “swelling”? The management welcomes your suggestions …)

“I won”t be visiting the Hotel Bel-Air or the Beverly Hills Hotel until this is resolved,” tweeted Ellen DeGeneres, faintly echoing Sophie Scholl’s staggering last words as she approached the guillotine.

“Within living memory, Westerners at least paid lip service to the ideal that “justice must be seen to be done.” Today, ain”t nobody got time for that.”

As a result of the boycott, a gala in aid of “global women’s rights,” at which two tables for ten go for a mere $50,000, had to be relocated, presumably at some expense, from one high-end venue to another. Not since the Trail of Tears … You see, the Dorchester hotel chain is owned by a branch of the Ministry of Finance in the Sultanate of Brunei, the same nation that recently adopted, says NBC News, “a strict form of Sharia law that would call for the severing of limbs for theft, as well as stoning to death for adultery or homosexual acts.”

A scant twelve and a bit years after the charred remains of thousands of men, women, and children were scattered across three American states, “trend-sucking celebrities“ have finally discovered an anti-Islamic cause they can get behind (so to speak): the banning of their favorite activities by a country they had previously never heard of and were unlikely ever to visit.

Their films, however, are still playing there. No word on when and where George Clooney, Ben Affleck, and Cate Blanchett will be holding a mass public burning of their paychecks.

Of course, when lesser folks vocally oppose the stealth imposition of Sharia law in non-Muslim majority nations, they are mocked by some of these very same individuals as ignorant racists. (It’s also news to me that liberals oppose “the severing of limbs” all of a sudden …)

Proving that celebrities tend to be wrong even when they are right, Bill Maher picked precisely the wrong week to take liberals down for humoring illiberal Islam. Indeed, there’s clearly something in the bottled water, because currently, the glitterati have adopted a second Islam-ish fad-cause-meme: the kidnapping of roughly 300 Christian girls by Nigeria’s undeniably Muslim Boko Haram.