Twilight of the Skeptics 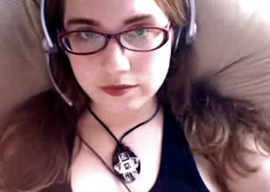 One of the things I miss about academia is the spectacle of alleged savants fighting like a couple of sandbox toddlers. Thanks to the Internet, such crass entertainments are available whenever I miss working with geeks. Consider the recent Richard Dawkins Elevatordämmerung.

Our protagonist in this non-event: a self-declared “Skepchick.” The woman, Rebecca Watson, is also a feminist. She had given a sermon to a group of “skeptics” on their moral failures as sexists who notice she is a girl when she is at skepticism conferences. This sort of behavior apparently “sexualizes” her as a unique individual, makes her uncomfortable, and generally scares away women skeptics everywhere. This is a common sentiment among shy women who participate in nerdy sausage festivals such as the skepticism movement. It’s less common that said women also publish semi-nude photographs of themselves in pin-up calendars dedicated to the same nerdy sausage festival.

Skepchick took video umbrage with the fact that one of her atheistic colleagues awkwardly asked her back to his room for a cup of coffee after her homily on sexism. He made his pathetic offer while in an elevator with her after a 4AM bar closeout, which suggests that he is probably as socially inept as she is. Princess Skepchick expected more chivalry from a bar populated with convention-going atheist nerds. I can empathize with such sentiments, much as I can empathize with people who visit Muslim countries and miss bacon.

“The fact that Dawkins is being undermined by fellow hater-atheists is delicately ironic.”

Some other lady member of the skepticism movement pointed out that Skepchick was being kind of a ninny, and an Internet catfight ensued. Then Professor Dawkins weighed in on the subject. It was a fairly incoherent ejaculation posted in some blog’s comments section, the sort of thing you type into the Internet machine when confronted with a bunch of bird-brained arguments over the sinfulness of propositioning girls in elevators. The good Professor Dawkins blathered something about mutilated Muslim clitorises and suggested everyone get over it and find something better to discuss. Why should anybody care?

Apparently a lot of people care. Dozens of “skeptical movement” white knights leaped to the fair maiden’s defense, denouncing Dawkins as a no-good skunk who probably kicks puppies. Feminist harridans blasted Dawkins as an evil man-pig. Dawkins tried to fight back, but his rhetorical skills were not up to the task of arguing with fellow atheists. The New Statesman figures Dawkins is kaput unless he repents and begs forgiveness.

The Skepchick has called for the head of Richard Dawkins. She dropped the big one, informing him that he is the most loathsome of creatures: the privileged old white man. Being something of a skeptic myself, I find it hard not to notice that young Anglosphere women are easily the most privileged people in the known universe. They’re so privileged that even pie-faced, cabbage-brained ones such Rebecca Watson may be able to ruin a world-famous author’s reputation. Dawkins helped found the shabby movement which gives her the adoration of nerdy dudes who respect her intellect but still wouldn’t mind seeing her topless. Because she has a hoo-ha and can use scary words such as “sexism,” some people accord her moral power comparable to that of Pope Urban VII. What was Dawkins’s blasphemy—that the world doesn’t revolve around some creepy attention-whoring nerd girl’s mild social discomforts? Apparently it does.

I don’t think much of Dawkins. His ideas on evolution are laughable and mostly popularize those of William Hamilton. He is a decent essayist, and his hatred of religion makes him popular with certain kinds of over-emotional atheists, but otherwise, he’s the type of smug bigot who gives unbelievers a bad name. I find his searing hatred of religious people to be childish and disgusting. The fact that Dawkins is being undermined by fellow hater-atheists is delicately ironic. I suppose the more advanced religions kill their gods after all; atheism’s true believers are no different.