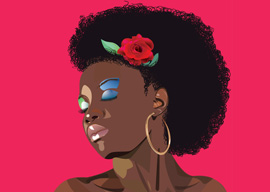 Who needs a Narnia-style wardrobe when you can drop into an alternate universe just by visiting the drugstore?

Then I twirl 180 degrees and find myself in an exotic, if very tiny, foreign land.

Something called “Queen Helene Cholesterol Hot Oil Treatment” sounds freaky enough, but what the hell is “Dr. Miracle’s “Feel It” Formula”? The scalp appears to be an area of particular concern. Making something called “shea” into butter turns out to be a primary industry.

For products purporting to increase one’s attractiveness, stuff for black hair often comes in plain, even hideous, packaging that makes it look more like long-defunct brands of car wax.

A shockingly large number of chemical hair relaxers boast”no pun apparently intended”of being “no-lye.” And some of these potions and pomades supposedly have, er, magical powers.

“Hair is to black women what weight is to white ones.”

Black hair is in the news, what with African-American Olympics viewers reportedly more focused on gold medalist Gabby Douglas’s hair than her gymnastic prowess. Gabby’s hair, you see, is “natural,” not “kept.” She’s supposed to “represent” better. She desperately “needs some gel and a brush.”

(Were these the same folks who denounced NBC as “racist” for running a commercial with a gymnastic monkey right after the network announced Douglas’s win? Or the ones who demanded Don Imus’s scalp after he called the Rutgers women’s basketball team “nappy-headed hos“? God, let’s hope so.)

Thanks to the Gabby Douglas story, many non-blacks are learning for the first time that hair is to black women what weight is to white ones and that “a large number of black women don”t work out because of their beloved hairstyle.” It’s also a major reason why so many African-Americans never learn to swim (with fatal results).

Every few years, the subject percolates back up into the general public’s awareness. A little movie such as Barbershop posts breathtaking ticket sales and introduces whites to the central role these neighborhood hangouts have long played in African-American life.