Twisty Colored Cancer Ribbons for All! 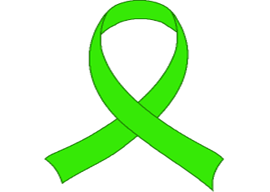 Did you know that four percent of the US population—one in 25 of us—are now “cancer survivors”? This I read in TIME magazine’s current issue, whose cover story concerns what John Wayne called “the Big C.” That means twelve million of us are entitled to wear one of those twisty colored ribbons proclaiming defiance of cancer.

I think I can count myself among the four percent. Back in March at my annual checkup, my family doctor found enlarged lymph nodes in my neck. He sent me off to a local radiologist for a scan. Off I went, thinking of that scene in Terms of Endearment when Debra Winger’s lymph nodes likewise engage a doctor’s attention. In my gloomy way, I was thinking of the Black Death. That great medieval scourge was most likely bubonic plague, whose characteristic symptom was buboes—dramatically swollen lymph nodes.

My buboes were duly scanned and the results sent to my doctor. “It’s likely some type of lymphoma,” he said, looking grave. “We need more tests.”

Lymphoma comes in dozens of varieties, ranging from the “indolent” to the “aggressive.” Those are the actual medical terms of art. In a doctor’s mind, diseases have personalities just as much as—more than, I darkly suspect—patients do. I don’t know how far they take this. Are there affable, flirtatious, sullen, and frivolous diseases? Consult your family physician.

“Scanning and diagnostic techniques may advance to the point where we shall find that everyone has cancer.”

Precisely which kind of lymphoma one has is determined by a decision tree of tests, each branch eliminating some possibilities. We soon got down to CLL (Chronic Lymphocytic Leukemia), which is not one condition but a family, with slothful and energetic members like the larger lymphoma clan. Googling it, CLL didn’t seem too bad. It can kill you, but not in any very gruesome way.

My most pessimistic thought was, “Well, I’ve got a Blighty One.” Back in World War I’s trench warfare, a wound that was serious enough to get you shipped back to Britain—“Blighty”—while not being disabling or disfiguring in any permanent way was much prized. We all have to ship back to Man’s Long Home sooner or later. Blessed is he who can slip away peacefully. Isn’t leukemia the movie disease, the one that takes you out of this world in more or less your normal shape without a lot of pain?

I can’t say I mind the thought of death. I’m close to the allotted span. I’ve been around the world a couple of times, published a few books, raised a couple of decent kids, and got a good life-insurance policy for the missus. What’s to bother about, so long as it’s not protracted and painful? A Blighty One? I’ll take it.

Inquiries among medical friends modified the picture. Immune-system failure, which leukemia brings along with it, can let in all sorts of nasty stuff. I heard some rather-not-think stories about rampant blood blisters, lungs filling up with fluid, and the like. For another, nobody who dies in a hospital bed does so while writhing in agony. “They’ll make sure you’re pretty well doped-up, whatever it is you’ve got,” I was assured. Still, CLL sounds less of a nightmare than esophageal cancer, which is what poor Christopher Hitchens has, and in the final throes of which you simultaneously starve to death and choke to death. Yeah, I’ll take it.