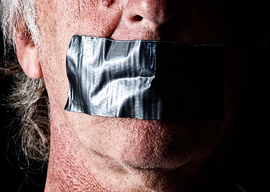 The mode of transmission of the disease kuru was established by the American virologist D. Carleton Gajdusek, who won the Nobel Prize for this work.

Kuru was a fatal neurodegenerative disease found only among the Fore, a tribe in the highlands of New Guinea. It was their custom to eat the corpses of their deceased, women and children consuming the brains while muscles were reserved for the men. Gajdusek injected brain tissue from those who died (women and children) of kuru into chimpanzees, who then developed a similar disease. Kuru was caused and transmitted by a particle of protein called a prion.

Whenever I come across the politically correct, which these days is more and more frequently, I think of kuru and prions. Of course I recognize that they, the politically correct, do not indulge in what is known to anthropologists as funerary cannibalism, and that political correctness is not literally a neurodegenerative disease caused by a prion; but it might just as well be, so devastating is its effect on intellection. It also appears to be infective, spreading from brain to brain, though at a pace much quicker than that of kuru. Perhaps it is more like a form of chronic mass hysteria.

I was leafing the other day through a philosophy magazine whose self-proclaimed aim was to make philosophy accessible to the masses. Since the masses now have university degrees, this might not seem as quixotic an aim at it might once have seemed, though whether the extension of tertiary education has actually raised the mean or median cultural level of the population may be doubted. There is still no better way of going bankrupt than starting an unsubsidized cultural magazine without pictures or advertisements for luxury goods.

The magazine was relentlessly politically correct. But political correctness is a little like our economic system: It must be forever expanding in order to survive at all. The capitalist economy has to stimulate new desires in consumers and make those desires as quickly as possible seem like real needs, without the satisfaction of which life is rendered impossible. In order to extend its soft totalitarian hold over the population, political correctness must discover new injustices to set right by a mixture of censorship, language reform, and legal privileges for minorities. This is because the meaning of life for the politically correct is political agitation.

Political correctness is contradictory. Thus there was an article in the magazine arguing, on what might loosely be called philosophical grounds, for an end to the separation of men and women in sports. Women tennis players, for example, should compete against men, even if this means (as it does) that no woman could ever again make a living as a tennis player. In the name of equality of the sexes, one sex should be eliminated from a whole field of endeavor. Presumably, also, there should be no concessions for the handicapped, who would be forced to compete not against those similarly handicapped but against the fully fit.

Though this be madness, yet there is method in it: For the greater political correctness” violation of common sense, the better”at least if its goal is power over men’s minds and conduct. In this sense it is like Communist propaganda of old: The greater the disparity between the claims of that propaganda and the everyday experience of those at whom it was directed, the greater the humiliation suffered by the latter, especially when they were obliged to repeat it, thus destroying their ability to resist, even in the secret corners of their heart. That is why the politically correct insist that everyone uses their language: Unlike what the press is supposed to do, the politically correct speak power to truth.

One of the strange things about the politically correct is that they never seem to become bored with their own thoughts. And this leads to a dilemma for those who oppose political correctness, for to be constantly arguing against bores is to become a bore oneself. On the other hand, not to argue against them is to let them win by default. To argue against rubbish is to immerse oneself in rubbish; not to argue against rubbish is to allow it to triumph. All that is necessary for humbug to triumph is for honest men to say nothing.

The opposite of political correctness, however, is not (or at least ought not to be) vile abuse. I looked on the internet recently for articles about the riots in Sweden that followed President Trump’s remarks about that country. Apparently the rioters burned cars and smashed storefronts in an attempt to demonstrate to him how well integrated they were. (The cars and shops were probably owned by people very like themselves, but rioters are not, on the whole, great thinkers.)