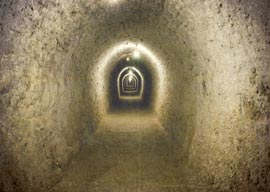 Every nation has, in its collective psyche, a special place for its bloodiest war: a place warmed with intense emotions and turbulent with unresolved”probably unresolvable“controversies.

For Americans that place is occupied by the Civil War, the 150th anniversary of whose ending in April 1865 we have just gotten through commemorating.

I have the Civil War in mind right now, having just spent a week touring some of the Eastern battlefields.

The equivalent for the British is World War I, which still, even now that the last actual participants have passed away, stirs very strong sentiments. Paul Fussell wrote a brilliant book about those sentiments: The Great War and Modern Memory (1975). If there is a book as good, along the same lines, for the American Civil War, I haven”t found it yet.

I have WWI in mind too, this week, for personal reasons.

This Wednesday is the centenary of June 10, 1915. That is the date on a letter in my possession, written by my maternal grandfather, Jack Knowles, to his wife.

Grandad was in the trenches on the Western Front. (Much of the time, in fact, he was likely under the trenches; more on that in a minute.) Grandma was at home with the kids, who at this point numbered 11, my mother the youngest at 3 years old.

“I visited the Crater last week, and saw the (reconstructed) tunnel entrance. That got me thinking about Grandad’s letter.”

The letter is posted on my website as an actual image with a transcription and some explanatory notes. The letter begins:

As can be seen, Grandad was just barely literate. Born in 1873, he was 42 years old, a coal miner in the West Midlands of England.

(The English, in their mental map of their own country, have a fairly clear idea of which parts constitute the North, the South, the East, and the West. The rest is called “the Midlands,” and for cultural and genetic reasons deriving ultimately from some unfortunate events in the ninth century is further subdivided into East Midlands and West Midlands.)

Forty-two was rather old to be a soldier at this point in the war. Conscription did not come in until the following year, and Grandad would anyway have been exempt as (a) a married man, who was (b) too old, and (c) a coal miner. The government wanted miners in the mines digging coal.

Grandad must therefore have volunteered. The family legend is that he was out with his mates one night when they all got drunk and enlisted in a mood of sentimental patriotism. That is perfectly plausible. The war was only nine months old when Grandad enlisted, and sentimental patriotism was still the common mood. As the war ground on, people got more cynical.

The bit about being drunk is also plausible. Grandad was a man of moderate habits, certainly no alcoholic, but English workingmen of his time drank a lot of beer. They were patriotic about that, too:

It was my Civil War explorations that brought Grandad’s letter to mind.

One of the battlefields we visited was Petersburg in Virginia, scene of the Grant-Lee Eastern Theater endgame from June 1864 to April 1865. A famous event in that part of the war was the Battle of the Crater on July 30, 1864.

Union forces were at this point besieging the city of Petersburg, around which Lee’s Confederate army was well dug in behind major fortifications. A Union officer who in civilian life had been a mining engineer suggested tunneling under the Confederate lines and setting off a huge mine, creating a gap in the line that Union forces could surge through.

The mine worked as planned, but the Union follow-through was fubar and the Confederates held their line.

I visited the Crater last week, and saw the (reconstructed) tunnel entrance. That got me thinking about Grandad’s letter.