Two Nations, Under The Donald 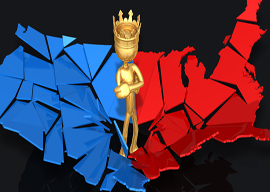 NEW YORK—“What Do We Do With These Men?” thunders a New York Times front-page headline, followed by a mouth-frothing, overwrought hissy fit worthy of an Oscar in the overacting department. These “men” are the usual suspects: media people and Hollywood types who have been accused by the weaker sex of sexual harassment. Oh, boy! Is this place going nuts or what? Spring is here, the girls are in their summer dresses—not really, they all wear leggings—but all one hears is about the bestiality of the stronger sex. Who is next is THE question. The bookies are having a field day. “Under what terms should they be allowed to return to normal life?” asks a female Times hack. As there is no American gulag, why not shoot the bastards and be done with it, ventures poor little me.

Never mind. We always have Trump, and if you think he’s getting away with anything because of the #MeToo movement, think again. The media want the rest of us to believe that the 45th president is just barely hanging on, a beleaguered White House prisoner struggling to keep his job. According to the majority of the Fourth Estate, there is “incontrovertible” evidence that the Russians got him his Pennsylvania Avenue residence by cheating. Needless to say, there is nothing of the kind, but when the Sulzberger-Bezos gang realized that the election had gone against them, presto, an avalanche of mostly false accusations produced a special prosecutor and then their paid hands went to work. Never mind the tattered credibility of the press; the wildest insinuation has now become fact. My one query is, how does, say, The New Yorker’s fact-checking department manage to pass all the outright falsehoods published by the magazine where Trump is concerned.

“America is split, between the bicoastal haves and the have-nots in between.”

Trump’s never-ending trial by assumption is never going away. The talking heads and the writers of The New York Times have hit a gold mine by repeating ad nauseam that the Russkies had the goods on Trump and brought him to power as their boy. And I thought that the Greek and Iranian and Middle East papers were yellow. I was a silly boy, but now I know better. Over here some wits call it TDS, Trump Derangement Syndrome. What it is in reality is an unelected bunch of people who decided to frustrate and overturn the election of a president who ran mostly on the issue of immigration. It may be counter to the rule of law, but the Sulzberger gang and their friends feel they are above it—the law, that is.

The nicest thing I read in the Big Bagel Times was by a drunken columnist Irishman who described the Trump administration as “one of kooks, quacks, criminals, drunks, wife beaters and grifters.” Elegant, don’t you think, dear readers? So here’s what’s going on in this great land: On one hand, you have women writing, appearing on TV, and shouting in public forums that they are being passed over for promotions by beastly men; forcibly kissed and felt all over and sometimes raped by more beastly men; and excluded from the corridors of power by, yes, you guessed it, even beastlier men. On the other hand, one hears and reads and watches political commentary by famous multimillionaire athletes and entertainers decrying the horrors that have befallen America with the Trump victory. The few voices raised in disagreement have been warned that their careers will be in jeopardy if they continue. It makes Trump supporters really feel like Christians—during Roman times, that is.

So there it is: America is split, between the bicoastal haves and the have-nots in between. The national pastime is now hate, payback, backlash, loathing—call it what you want, but it’s got to be malice toward men and Trump supporters. And this makes for the perfect oxymoron: journalistic ethics by The New York Times. The irony is that those really in power feel aggrieved that the palookas in Ohio and Michigan voted their darling out and the Trump man in. The ferocious dustup that has followed The Donald’s victory proves not only that a Deep State exists, but that the Fourth Estate in America has to be reined in. Murdoch and his Fox News have been attacked like there’s no tomorrow because they dared take the votes of 62 million Americans into account.