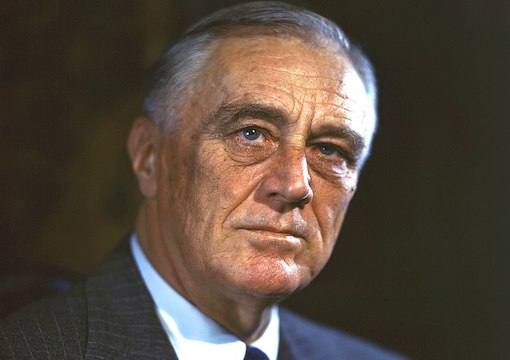 Remember that time Democrats hated a whistle-blower so much they turned him over to a foreign government to be imprisoned on an island? Think Gilligan’s Island but without the laugh track. There was a millionaire, however…a cuddly cripple with a fondness for war and a penchant for collusion. I speak, of course, of that most “problematic” Democrat icon, Franklin Roosevelt.

Just sit right back and you’ll hear a tale…

In April 2016, when then candidate Trump dared to utter the words “America First” during a foreign-policy speech, FDR acolytes clutched their collective pearls. Susan Dunn, a professor of humanities at Williams College, took to CNN to explain why Trump’s new catchphrase was the most Hitlery thing a Hitler could holler. “‘America First’ was the name of the isolationist, defeatist, anti-Semitic national organization that urged the United States to appease Adolf Hitler,” explained the FDR author and historian. According to Dunn, the only thing standing in the way of Roosevelt’s coveted war against European fascism was the backwoods hootin’ of America’s hicks and hillbillies: “There would soon be several hundred America First Committee chapters and almost a million members, two-thirds of whom resided in the Midwest,” fumed Dunn.

Damned Midwesterners! Why can’t they just grow our crops and milk our cows and shut the hell up about matters that are intellectually beyond their ken? According to Dunn, America First was powered by anti-Semites in states like Iowa and Kansas, Neanderthalic nose-pickers whose petty hatreds blinded them to the wisdom of FDR’s crusade.

I wrote Professor Dunn an email, and I’ll confess that I sent it pseudonymously, as I wanted her to think I was one of those ignorant Midwestern lummoxes. In between grunts of “gluurp” and “braaak” and whatever other sounds I assume Kansans make when they’re attempting to cogitate, my uneducated avatar pounded out the following missive:

I once read that during a campaign stop in Boston on October 30, 1940, President Roosevelt, at the time running for reelection, said, “And while I am talking to you mothers and fathers, I give you one more assurance. I have said this before, but I shall say it again and again and again: Your boys are not going to be sent into any foreign wars.” Is this a genuine quote, or an urban legend?

Hi! It’s definitely a real quote. He wanted to win the election and was willing to make that promise. In his mind, he thought that if the US is attacked, it’s not a “foreign” war. But he shouldn’t have made that promise.

Naughty Roosevelt, he shouldn’t have lied like that just to win the election! But all is forgiven, because in his mind he thought it’s not a foreign war if we’re attacked (fun fact: Nazi Germany never attacked us).

Of course, my low-IQ Kansan’s first email was just the lure on the line. Time to reel the flounder in with a second one:

One quick follow-up: If FDR felt the need to make that statement in Boston, in other words, if he believed that doing so IN BOSTON would assist his reelection bid, then surely the desire to keep the U.S. out of war in 1940 was not limited to the Midwest. Is that accurate?

And I never heard from Professor Dunn again!

The above story illustrates the most troublesome aspect of FDR worship, even more problematic than the internment camps and the book-banning: FDR lied his way to reelection in 1940, publicly promising to keep “our boys” out of Europe’s growing conflagration, while privately doing everything he could to override the will of the voters and get us neck-deep in war. No one—not even an FDR fangirl like Susan Dunn—can deny that. And what troubles these folks even more than the president’s actions is the fact that isolationism had widespread support across the U.S. It wasn’t just a mania among cornhuskers and cross-burners. The public’s will was reflected in the three Neutrality Acts passed by Congress between 1935 and 1939.

Americans overwhelmingly did not want war. FDR wasn’t just misleading the voters; he was misleading them in a way that would have genuinely mattered at the ballot box.

Enter the whistle-blower who tried to expose FDR’s secret machinations prior to the election…the guy who witnessed (and not secondhand via hearsay) an American president engaging in dirty dealings with a foreign power, in violation of U.S. policy and in complete contradiction to what he was promising on the campaign trail.

Surprisingly, even as present-day D.C. is in turmoil over a “whistle-blower” who supposedly exposed a president’s mischief with a foreign leader, no one’s mentioning Tyler Kent. Our mainstream media loves invoking historical references, but only when they reinforce a beloved narrative. Emmett Till’s in more newspapers than Marmaduke. But Tyler Kent? Who dat?

Tyler Kent was true-blue-blooded Virginian aristocracy. His daddy was a diplomat, and he shared DNA with presidents and Founding Fathers. Fancy boarding schools, Princeton, the Sorbonne, by age 20 Kent spoke more languages and had shagged more debutantes than you’ve had hot meals. By his late 20s, Kent was working as a cipher clerk at the U.S. embassy in London. All American missions in Europe routed their coded dispatches through the London embassy’s code room, and Kent was one of four code clerks who got to see everything.

And what he saw was collusion, true collusion, low-down and dirty. FDR was secretly conspiring with Churchill to violate U.S. neutrality and accelerate American involvement on behalf of Great Britain. That this coded exchange was going on behind the back of Neville Chamberlain, the head of state (and therefore the man FDR was obligated to deal with), made an already ugly example of collusion even worse. FDR was not only violating the policy of neutrality that had been established by Congress, he was also undermining the democratically elected prime minister of an allied nation. And he did all of this while free-wheeling in his Jazzy Power Chair from one election stop to another promising “again and again and again” to keep the U.S. out of any foreign wars.

What Tyler Kent saw in the code room was top-grade political dynamite. In the words of Boston University historian Peter Rand:

The covert communiqués had started in September 1939, as Churchill assumed the position of First Lord of the Admiralty for the second time, and continued through winter and into spring, when Churchill became prime minister. In their exchanges, Churchill and Roosevelt, assuming they were writing in confidence, mulled how FDR might slip Britain war materiel in bald violation of U.S. law.

As Rand points out, if “word of this got to the press,” the impact on November’s presidential election could have been devastating. And Kent, deciding it was his duty to inform the American public of the president’s violation of the Neutrality Act, resolved to leak the information to isolationists in the State Department and the British Parliament. Sadly, Churchill became prime minister before Kent could act on his plan, and he had the young code clerk imprisoned on the Isle of Wight as (in the words of Professor Rand) “across the Atlantic, the Democrats nominated FDR a third time, and his campaign unfurled without a whisper that the president had trampled the Neutrality Act.”

For those of you keeping score, there were technically two instances of collusion at play here. First, there was the FDR/Churchill collusion aimed at secretly violating the Neutrality Act, and second, there was the FDR/Churchill collusion to imprison Kent once it became clear he was going to blow the whistle. On the American side, Kent’s diplomatic immunity was revoked and the Brits were told they could do with him as they pleased. On the British side, Kent’s “trial” was conducted in secrecy in a shuttered room (a SCIF, basically).

I spoke with the Institute for Historical Review’s Mark Weber, my old friend and the author of an essential essay on Kent. Mark stressed that perhaps the most vile aspect of the Kent affair was that FDR’s cronies blatantly admitted that British needs took precedence over U.S. law and the rights of a U.S. diplomat:

In an official statement on the Kent affair, the State Department acknowledged that in this case the US government had put British interests ahead of American interests and US law. The Roosevelt administration, it declared, had sanctioned Kent’s imprisonment because “The interest of Great Britain in such a case, at a time when it was fighting for its existence, was therefore preeminent.”

In 1945, with the war over and FDR dead (his brain having literally exploded with delight from the knowledge of how many Germans and Japs he’d immolated), Kent was quietly released by the British into a world that no longer gave a damn about the secrets he’d uncovered. He died penniless in a Texas trailer park in 1988, almost assuredly not in the company of a debutante named Muffy.

Though Tyler Kent’s name has been lost to history, when he is invoked, it’s almost always to question his character. He was a “Nazi sympathizer,” or a “KKK racist,” or a “Russian spy” (to the left, the neocons, and deep staters of all stripes, that’s the holy trifecta of slander: Nazi, racist, and Russian bot).

Speculation over Kent’s motives is an effective way to distract from the established facts that require no speculation: FDR was indeed colluding with a foreign power to violate U.S. law, and Tyler Kent wanted people to know about it. Even if Kent had been a goose-stepping Klan-hooded Marxist, it wouldn’t have made FDR’s actions less wrong, or the voters less deserving of the truth.

One can argue that Kent’s spirit lives on today in people like Julian Assange, but at least we as a society have evolved to the point where we no longer put people like that in pris…oh, shit. Right.

Assange, like Kent, is all about transparency. That’s a key difference between the Kent affair and the septic carnival going on right now in D.C. With Kent, we had a true whistle-blower who wanted to empower voters by exposing secret plots and schemes. The current so-called whistle-blower, and the leprous carnies sequestering him behind the freak-show curtain, are all about secret hearings, rumors and hearsay, and a belief that the deep state should have veto power over election results. Tyler Kent, a genuine whistle-blower who relied on primary sources, wanted nothing more than to be heard. The current supposed whistle-blower, who relies on secondhand gossip and speculation, wants so badly to hide from the public eye that he might as well have confined himself to an island.

That’s progress for you; we’ve bred the self-interning whistle-blower, one who assists and enables secret star-chamber hearings instead of fighting against them.

I’m sure that FDR, wherever he may be (most likely giving a significantly hot fireside chat), would appreciate how far we’ve come.