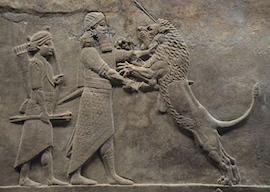 I seldom give advice, the taste of others being so very different from my own, but I strongly advise anyone who is in London before Feb. 24 to visit the British Museum’s wonderful exhibition I Am Ashurbanipal: King of the World, King of Assyria. If your imagination is not stirred by it I will do as Ozymandias commanded:

“My name is Ozymandias, king of kings;

Look on my works, ye Mighty, and despair!”

Ashurbanipal, for those who can’t tell their Ninevehs from their Tyres or their Medes from their Persians, was the last king of Assyria before it was overrun by the Babylonians. He came to the throne in 669 BC and died in mysterious circumstances, whether of illness or murder nobody actually knows; but in his time, he was the head of the most powerful empire in the Middle East and perhaps the world.

To judge from the magnificent carved gypsum wall panels of Ashurbanipal’s palace on display at the exhibition, the king seems to have spent a great deal of time and effort in killing lions, whose habitat in those days extended to what is now Iraq. To prove his prowess, he killed them by his own hand. One panel has him pulling a lion by its tail and clubbing it over the head. Others he shot with arrows, or by ramming spears down their throats. One of the most affecting of the wall panels, at least to a modern sensibility, is that of a lion on its haunches with a spear between its shoulders, spewing blood very shortly before it expired. No doubt the emotion we feel on looking at it is very different from the emotion an Assyrian would have felt on looking at it, pity for lions being a measure of our effeteness.

Actually, Ashurbanipal didn’t really hunt lions in the sense of going out into the wilderness and stalking them himself. He killed captured lions that were let out of their cages in controlled circumstances, surrounded as he was by guards and soldiers who were ready to intervene should the released lions become too frisky and threaten the king. No doubt he was not as well protected as the actor Victor Mature, who once played a part in a film in which he wrestled with a lion, after which he said he had been in danger of being gummed to death, the lion’s teeth having been drawn; but the killing of lions by Ashurbanipal was more of a symbolic or propagandistic nature.

“Ceausescu no more stalked bears than Ashurbanipal stalked lions more than two and a half millennia ago.”

There is one panel in which four dead lions lie at the king’s feet. He is pouring a libation of wine over them, much in the way that English judges used to ask God to have mercy on the soul of those they had just condemned to death.

Now, a man with four dead lions at his feet whom he has just killed is clearly a man of some strength, prowess, power, and importance; and I have to admit that my first thought when I saw the lions thus arrayed and set before Ashurbanipal was of the later Romanian dictator Nicolae Ceausescu.

Some time after his downfall, there was an exhibition in Bucharest of portraits of him in his glory days, if that is what they were. Prominent among the portraits, mostly of poor quality but making up in number what they lacked in artistic merit, were those of him after a bear shoot. In one portrait, there were twenty bears arranged in a semicircle around him, each and every one of them shot by him, the man who was called Conducator of the Golden Epoch, the Danube of Thought. In this way, Ceausescu assumed the mantle of an emperor, though also taking pride in his proletarian origins. The dead bears were a symbol not only of his power, but of his vertiginous social ascent.

Now, Ceausescu no more stalked bears than Ashurbanipal stalked lions more than two and a half millennia ago; they were driven or dragged toward Ceausescu by beaters. The main advance in technique in the intervening period was that the bears were sedated with tranquilizers to assure first that they posed no danger to the Conducator, and second that they were so slowed down that even Ceausescu could not miss. How far has humanity advanced, how much progress it has made!

I am afraid I do not have the data that allows me to compare the effects on the population of Assyria circa 2650 BC and of Romania circa AD 1990 of their respective leaders’ prowess as hunters of the largest beasts in the vicinity. Certainly, once Ceausescu had been removed from office, his claim to have been a brave hunter of big beasts was met with laughter and derision. Before, of course, it would have been greeted with sycophantic admiration.

Ashurbanipal was also renowned for his erudition. He claimed to be acquainted with the arcane wisdom of his time and to be skilled in mathematics. He had himself portrayed with a stylus in his belt, the instrument with which the Assyrians wrote their cuneiform script on clay tablets. Ceausescu, and even more his wife and accomplice in dictatorship, Elena, claimed erudition also. For some reason, Mrs. Ceausescu alighted on stereochemistry as her alleged field of expertise, and her great work, Stereospecific Polymerization of Isoprene, which was available everywhere in Romania even when it was difficult to find potatoes. By contrast, her husband, Nicolae, confined himself to less heart-stopping titles such as Exposition of the Programme of the Romanian Communist Party for the Improvement of Ideological Activity, for Raising the General Level of Knowledge and the Socialist Education of the Masses, for Grounding the Relations in Our Society on the Principles of Socialist and Communist Ethics and Equity and ten volumes of Romania on the Path of Development of a Multilaterally Developed Socialist Society. As far as is known, Ashurbanipal managed only a few paltry letters.

On the other hand, it must be admitted that, from the purely aesthetic point of view, the products of the Assyrian empire were far in advance of those of the multilaterally developed socialist society of Romania.