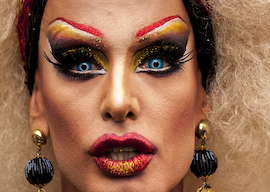 It’s time to take the “he” out of heliocentric. Trannies are the center of the universe now, and anyone who refuses to accept the new zheliocentrism can count on swift punishment for their heresy (sorry, zheresy).

Ask yourself why trannies have become so important to the left. It has nothing to do with votes—there aren’t enough trannies in the U.S. to impact any election—and tranny issues score terribly in swing states (even acromegalic stopped clock Bill Maher understands that there’s zero electoral advantage in pandering to trannies). It’s not about money; trannies are more than twice as likely as normies to live in poverty. It’s not about energizing the Democrat base; blacks and Latinos have other, more pressing concerns.

Conservatives sometimes speak of trannyism as a cult, but they get it backwards. They write as if it’s the trannies who are in the cult. No, the trannies are a tool to put us in a cult, a process that starts by changing our names. As cult guru Tim Conway (not the Dorf guy) writes in his manual for successful culting, name changes “help effect a psychological ‘death’ to the old ego-persona.”

So, now we’re all named “cis.” We’re no longer “normal,” we’re “cis.” We’ve been renamed. Why? Because to the left it’s all about seeing how much we’re willing to take. If they can make us accept a new name, they can pretty much make us do anything. It’s like that Chris Rock routine about how a woman will yell and scream at her man, berating him, insulting him in public, taking it as far as she can…and then she’ll purposely take it one step too far. She’ll say something that no man with a healthy ego would tolerate. And if the guy allows it, she knows, “Oooh, I got him now!”

Rock’s point was that when properly conditioning a boyfriend (or a society), you have to see how far you can push without getting blowback. And if you find that you can cross “the line” (whatever that line is in the given situation) with no resistance, you’ve successfully pacified your mark.

Rock’s right about how women instinctively understand this concept. So there would be no greater victory for tranny cultists than to break that particular demographic. Not just women per se, but the angry femmes, the “grrrl power” crowd. Make them accept a new definition of “female,” one that allows men looking to exert dominance over women to do so from within. After decades of basing feminist ideology around “our bodies” and “our biology,” make women accept the concept that body and biology are irrelevant. Tell them that womanhood is nothing more than what a man says it is.

Feminism was supposed to be about making sure men don’t get to “control” women. Yet what greater control is there than the power to determine who is a woman? It’s no longer about “our bodies, our rights.” It’s about “if a man says he’s a woman, he’s a woman. Now shut up.”

You know that prison cliché about how on your first day behind bars you’re supposed to beat up the biggest, toughest brute in the yard? Take out the most feared enforcer, and the joint is yours? It works, at least in identity politics. The feminists got knocked cold. This big, bossy demographic that has money and votes, and comprises the core of the Democrat base, has been laid flat. As men in lipstick dominate one female sport after another, women are sitting there and taking it like good little girls. And lest you doubt the severity of the beatdown, the trannies are not just defeating female athletes but taunting them. When “Rachel McKinnon” (played by Rhys McKinnon in drag) became a world-record-breaking “female” track cycling champion last month, he rubbed salt in the wound by calling actual female competitors “losers.”

Feminists fought for decades to free women’s athletics from the shadow of its male equivalent. Using Title IX, they sued, bullied, and threatened their way to separate but equal, then separate but better. “Female athletes deserves more pay, more accolades, more sponsorships, more material support!” This was an obsession for feminists. And now that women have successfully used Title IX to guarantee parity between male and female athletic programs, men in dresses are using the law’s antidiscrimination language to infiltrate women’s athletics and dominate from the inside. Right or wrong, it’s a stunning irony; women dominated by men within women’s sports.

Two of cyclist McKinnon’s competitors objected to the inclusion of a criticism-proof drag queen in what was supposed to be a women’s race. McKinnon’s response? He’s currently lobbying USAC, the national governing body for bicycle racing, to have those competitors ejected from the sport for their complaints!

He’s having them penalized for voicing an opinion, and feminists, whose catchphrase for years has been “Men feel threatened when we voice our opinions,” are remaining silent.

“Real champions want stronger competition,” McKinnon mockingly hissed at his female critics. One might ask why, if “real champions want stronger competition,” McKinnon doesn’t compete against fellow males. But such a question misses the point. Don’t look for logic; this is about will-breaking. McKinnon’s making the “strongest” women eat shit. It’s humiliation in the service of domination.

Some female athletes are consoling themselves with the fact that “at least” the International Olympic Committee regulates the testosterone level of trannies, insisting that their testosterone is “below 10 nmol/L for at least 12 months prior to the first competition.” But McKinnon is actively lobbying to end that policy. He told USA Today that “policing the testosterone levels of transgender athletes violates their human rights,” and to even consider issues of “performance advantage” is a hate crime:

Funny, because when Sarah Fader, an actual female cyclist bested by McKinnon, complained about “fairness,” she was attacked for it. The 5-foot-5, 135-pound Fader told VeloNews that competing against the 6-foot, 200-pound McKinnon was “simply not fair,” and that the “science is not settled” on the issue of trans athletes (VeloNews admitted that several other female cyclists agreed with Fader but were afraid to go on record due to “fear of repercussions”). Fader was immediately chastised by “award-winning” journalist A.C. Shilton (a woman): “Fairness is a tricky thing to argue in a case like this, and science is one of those things that’s rarely settled.”

When McKinnon invokes “fairness,” feminists respond with “Yay, you go, mangirl!” But when an actual woman does the same, other femmes beat her down with “Hey, fairness is a tricky thing…too complicated a concept for silly girls to comprehend!”

“Science is one of those things that’s rarely settled.” That’s what Shilton said to a woman. But when speaking to a man, Shilton expressed a different view of science. In an interview with tech-industry innovator Eric Michelman for Yes! magazine, Shilton stressed how dependable science is and how scientists have easily “settled” matters like climate change. Society should stop “debating what the science means,” Shilton advised, because it’s “settled.”

When discussing intellectual pursuits with a man, Shilton praised science and affirmed the ability of scientists to “settle” complicated questions. But when gaslighting a woman on the issue of trannyism, Shilton wrote that “science is one of those things that’s rarely settled.”

I thought we were supposed to be getting girls excited about STEM! Apparently, supporting the tranny agenda takes precedence. “Don’t worry your pretty little heads about science, sweeties. It’s ‘one of those things that’s rarely settled.’”

Speaking of science, last year ’80s icon and überfeminist Molly Ringwald wrote in The New Yorker that “genitals” (not gender, but genitals) are “assigned at birth.” Feminists wear pussy hats and bray endlessly about how their pussy defines them and how it’s “theirs to own” and not the property of men or the government, and along comes a leading feminist saying no, genitals are assigned to us by doctors (most of whom are men). In other words, we only have vulvae because men give them to us.

And feminists are cool with this? Sure. Most of those who are keeping women in line on the tranny issue are women themselves. Behind every male cult leader is a female groomer. There’s no Jeffrey Epstein without Ghislaine Maxwell.

A feminist intellectual said women need to be beaten into accepting trannyism. And she said it in The New York Times. And nobody objected to terminology that, in any other context, would be seen as promoting violence against women.

Many years ago, I tried unsuccessfully to explain to “chic atheist” Matthew Inman (creator of the Oatmeal comics site) the difference between Penn Jillette’s atheism and that of Stalin. Whereas Jillette sees his atheism as an extension of his supposed devotion to science, logic, and reason, to Stalin (and most communists) atheism is part of a greater overall strategy by which nothing can take precedence over the state. Not faith, not family, not race, national identity, or gender. Yes, identity politics are useful; leftists have always played various groups against each other to destabilize nations. It’s a tactic. But eventually, devotion to the state has to take complete precedence over everything else.

Hence the left’s use of trannies to destroy the feminist will. Feminism is a tactic, but in the end, even the harpies need to submit. The state needs to know that it can break the will of every identity group, even leftist-friendly ones.

If they can make even the most strident man-haters bow before men in wigs and call them sister, all is lost.

If feminists can’t fight back against such a figurative cock shoved down their throat, no one can.

Next week in Part II: Trannies, feminists, and an Amazon.com lawsuit you probably haven’t heard about.