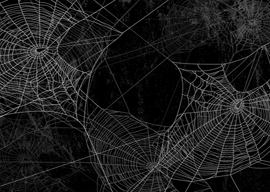 You are not where you think you are, reading this: not at home, nor on your yacht, nor hiding from the law in some overripe equatorial dump. Unfurling the crisp pages of Takimag over your morning schnapps, you are somewhere quite different: deep in the finest gossamer of the Intellectual Dark Web. Such a fiendish-sounding thing seems to have sprung from the pages of a Marvel comic—not the pages of The New York Times. Clicking through, I was disappointed to find the reality is somewhat more prosaic than the name implies—just writers and YouTubers, plying their trade, having the same conversations online that they might have in person. What distinguishes it is—of course—that they are not the same conversations that happen down at the Times.

Back in the heady days of techno-utopianism—that is, before 2016—there was a more archaic phrase for this phenomenon: “the internet.” Back then, the web was a splendid thing. A liberal’s wet dream! Somewhere people would meet and each—in their own esoteric manner—uncover their monocultural future. The despotism of the majority realized! 2016—or “Fuck 2016”, as I believe it’s known to liberals—changed all that. It turned out the web actually did what it said on the tin—disintermediated debate, laying the way for the direct-democratic protests of Trump and Brexit.

The initial punching down was predictable. You thickos! You uneducated conservatives with your troglodyte IQs! “Data” was produced to serve the point that conservatives are just more stupid.

“By polarizing the web into the Light and Dark, the phrase associates free thought with a host of paranoiacs and contrarians.”

Yet as the Liberal Consensus morphed into Liberal Unreality, good old homo sapiens started dusting off the toolbox of rationalism. The ghosts of Spinoza and Hume were soon stalking the web, asking: Is gender really a construct? Does religious culture really have nothing to do with behavior? Is it really universalist to apply separate standards to separate ethnic groups—admirably described by Maajid Nawaz as the “racism of low expectations”? Haven’t notions of class victimhood and class guilt already run their bloody course far enough in human history?

Cometh the hour, cometh the smear. Two weeks ago, the Times offered its titillating new “Dark Web” slogan. The implication is clear. Playing with notions of classical liberalism, let alone academic freedom, is now akin to the transgressive offerings of the real dark web—arms dealing, snuff movies, reruns of André Rieu concerts, and the like. Nice try, you might think. Yet the strategy is more insidious—and successful—than it appears. By polarizing the web into the Light and Dark, the phrase associates free thought with a host of paranoiacs and contrarians. And so it is that the finely honed erudition of Jordan Peterson is housed with the boisterous attention-seeking of Alex Jones; the cool dialectical analysis of Quillette with the arid contrarianism of Spiked; and yes, the barbed induction of Takimag with a who-knows-what host of crazies. Herein lies the danger—that this type of wedge strategy makes your average sane Western skeptic start feeling like a radical.

An example: I recently took a glass of wine with a nice English blonde of the sort for whom inoffensiveness is their cradle religion—the girl who’d apologize if you spilled your soup on her dress. And yet her voice plunged to a furtive whisper when discussing what she consisted to be normative human behavior; to whit, dying with the same bits you’re born with and maybe having some kids on the way. Even among her bone-china circle of friends, such views had been outlawed. Where does such ostracism lead? Next the poor girl will be under the covers, watching the eel-like contortions of Russia Today’s chief polemicist Afshin Rattansi—and believing them. By such means the intellectual web of free inquiry is turned dark; and the straw man of liberals turns to flesh and blood.

This radicalization of mainstream opinion has long been the end point of liberal agitation. The U.K.’s Cabinet Office put this rather succinctly under Tony Blair—“rubbing the right’s nose in diversity.” Yet the advent of the Intellectual Dark Web moniker reveals a further truth. It is not just the right’s nose being rubbed but that of the West’s underlying tradition of liberal inquiry. The reasons for this travesty are too subtle for most soi-disant modern La-La-Liberals to discern. Liberalism—in its original, pre-Marxist guise—was about freeing the individual. This was the essence of the Springtime of the Nations, when the people of Europe sought to cast off the shackles of aristocratic conservatism. Its big bang was the revolutions of 1848, which sought to reclaim a trace of Napoleon’s promises. In response, the old order turned its guns on them. Ordnung was restored—but the genie was out of the bottle. 1859 saw the publication of On Liberty (now the little red book of the Intellectual Dark Web). Yet elsewhere a competing vision was gestating: The Communist Manifesto, which offered not liberty but liberation.