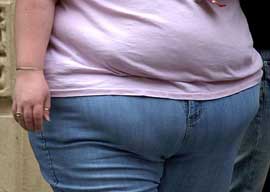 The results are in: Fat people overeat because our fat-fearing society “fat-shames“ them, which then causes them to overeat. This doesn”t explain how they got fat in the first place, but let’s not get picky.

According to a new study called “The ironic effects of weight stigma” in the Journal of Experimental Social Psychology:

Exposure to weight-stigmatizing news articles caused self-perceived overweight women, but not women who did not perceive themselves as overweight, to consume more calories and feel less capable of controlling their eating than exposure to non-stigmatizing articles.

In other words, she hoisted all seventeen cream-filled donuts to her mouth and ate them in one sitting not because she lacks self-control, but because society told her it’s a bad thing to do. I”m trying to make sense of that, but I can”t seem to wrap my head”or, for that matter, my arms”around it.

Still, this supports a study from last year that claims women who feel they have been discriminated against based on their weight are prone to pack on more pounds. Unless your brain’s arteries are clogged with unhealthy fatty plaque deposits, it should be obvious that the only safe inference one can make from that study is that some women who overeat also suffer from persecution complexes and tend to blame others for their dietary decisions.

Regardless of reality, it has become au courant to be “fat-positive””nay, to celebrate fatness”and to instead shame the fat-shamers, because the Internet is where people ruthlessly toss shame at one another like feces-flinging chimps. Actress Jennifer Lawrence has stated that “it should be illegal to call someone fat on TV.” Crushingly monstrous black actress Gabourey Sidibe of Precious fame, who is larger than the entire nation of Gambia as well as 16 of Jupiter’s moons, routinely receives “You go, girl!” accolades for basking in her life-threatening blubber as if it were a virtue.

In reality, the best orchestrated recent campaign of literal public shaming was against a mom who was unashamed to be fit rather than fat. The backlash”fatlash?”is here, and it’s being called “fit shaming.” It is the obese civil-rights activist’s version of misandry, heterophobia, or anti-white racism”full-on hatred directed against the perceived “haters” that is justified on the premise that they hated me first, Mom.

The “fat acceptance” movement”AKA “fat power,” “body acceptance,” “size acceptance,” and “weight diversity””provides a waistband-busting cornucopia of unintentional humor. It is identity politics for the adipose, that odd, contradictory demand that society shouldn”t define them by their designated victim category even though that’s apparently the only way that these self-designated victims are able to define themselves. The movement goes all the way back to the 1960s, when “fat activists” staged a Central Park “fat-in” and the National Association to Advance Fat Acceptance was founded.

The propaganda campaign appears to have been resoundingly successful, because Americans have “accepted” fat so much, they”re a hell of a lot fatter than they were in the 1960s. An estimated two-thirds of Americans are now officially overweight; a third are obese.

Some blame genetics for obesity, but genes don”t mutate quickly enough to cause such a huge swelling in the public’s waistline over the course of a generation or two. Researchers at Harvard say that “genetic factors identified so far make only a small contribution to obesity risk.” Endocrinologist Dr. Joseph Majzoub of Boston Children’s Hospital says that obesity-related gene mutations “account for under five percent of the obesity in our society, and certainly are not, by themselves, responsible for the current obesity epidemic.”