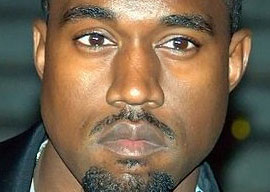 Kanye West made a lot of black people unhappy last week, and for that he deserves a cookie.

In a modern remake of 1970’s infamous Elvis/Nixon summit, the shamelessly hyperactive hip-hop mogul visited Donald Trump in the Oval Office wearing a MAGA hat and delivered a breathlessly incoherent ten-minute soliloquy before hugging the president and telling him that he loved him.

Football great Jim Brown was also in attendance, but he said almost nothing and it’s unclear he even knew where he was. But he didn’t need to speak, because Kanye never shuts up.

West spoke of alternate universes and how time doesn’t exist. He said that kids should play basketball while they are learning math. He said that love is the cure for police brutality. He claimed his IQ was in the 98th percentile. He said that his erratic behavior was due to sleep deprivation rather than bipolar disorder. He said “motherfucker” and “bullshit” and “balls.” He urged the construction of “Yeezy Ideation Centers” in Chicago. (One of his many nicknames is Yeezy.) He said that wearing the MAGA hat made him feel like Superman.

But as wickety-wack as all that was, what had black pundits calling him a coon and a House Negro and an Uncle Tom and a race traitor and a sellout was his repudiation of every last political preconception that blacks have been spoon-fed and have willingly swallowed for the past couple generations—those “progressive” policies that have led to welfare dependency and broken homes and ghetto war zones. For as dumb and flighty as Kanye West tends to be, his chief sin was to say things that a black person is simply not supposed to say. The following are all quotes West made during the Oval Office press conference:

You know, people expect that if you’re black you have to be Democrat.  I have a — I’ve had conversations that basically said that welfare is the reason why a lot of black people end up being Democrat.

And I said, “You have to bring manufacturing onshore.”  And not even shore; into the core.  It’s not about the border; it’s the core of Adidas.  And Chicago is the core of Middle America.  And we have to make Middle America strong.

“West is living proof that when you’re worth a quarter-billion dollars, you can walk off the plantation whenever you wish.”

You got Levi’s, the greatest jeans company in the world, making their jeans in Vietnam…We have to bring jobs into America because our best export is entertainment and ideas.  But when we make everything in China and not in America, then we’re cheating on our country and we’re putting people in positions to have to do illegal things to end up in the cheapest factory ever: the prison system.

And we also, as black people, we have to take a responsibility for what we’re doing.  We kill each other more than police officers.

One of the moves that I love that liberals try to do — the liberal would try to control a black person through the concept of racism, because they know that we are very proud, emotional people.

I can’t find a single factual error in there. It all seems eminently sensible—moderate, even. But the media’s Official Negroes were so inflamed by West’s comments, it’s almost as if they needed some Preparation H rubbed on their souls.

“This is white supremacy by ventriloquism,” burped the eternally aggrieved Michael Eric Dyson, who is far lighter-skinned and far less successful than Kanye West. “A black mouth is moving, but white racist ideals are flowing from Kanye’s mouth. Kanye West is engaging in one of the most nefarious practices yet. A black body and brain are the warehouse for the articulation and expression of anti-black sentiment.”

I’ve watched the video of the Trump/West summit a half-dozen times and am still straining to find the “anti-black” part.

“What I saw was a minstrel show today,” sighed CNN’s Don Lemon, a gay black man who engages in sodomitical exploits with his white male partner. “Him in front of all these white people, mostly white people, embarrassing himself and embarrassing Americans, but mostly African-Americans, because every one of them is sitting either at home or with their phones, watching this, cringing.”

I hadn’t realized that all African Americans think the same way. It almost sounds like they’re easily led or something.

Lemon also added that West obviously needs psychiatric help. So did many others. After all, when a black person says that jobs should remain in America and that the welfare state has destroyed the black community, what other option is there than to gaslight him?

“[West is] an attention whore, like the president…He’s the token Negro of the Trump administration,” whinged Tara Setmeyer, a fat token Negress for CNN.

Writing for Esquire—which used to be a softcore Playboy but has morphed into yet another white guilt factory, someone who calls himself Malcolm-Aimé Musoni says that West must be held “accountable” for the summit and “doesn’t deserve to come back from this.”

In The Atlantic, another Token Black Sourpuss named Vann R. Newkirk II questioned West’s mental health and accused him of misogyny and “narcissism,” the latter of which has become a go-to smear term that boring people toss at charismatic people.

CNN’s Chris Cuomo—who is not black but appears to wish he was—steered clear of directly criticizing Kanye West because that would be, you know, racist. Instead he wondered what sort of racist thoughts were bubbling up inside the president’s skull while listening to West speaking. What once was called “journalism” now consists of putting “racist” thoughts in people’s heads.

West is living proof that when you’re worth a quarter-billion dollars, you can walk off the plantation whenever you wish.