Uncle Sam, Give Us Your Guns 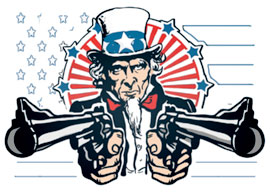 Barack Obama approves of this plan, and on January 16 he posed for pictures with children to prove it. (Incidentally, he also signed 23 executive orders that apparently had something to do with guns…or whatever.) The White House even sponsored videos where children talk about guns and how bad they are.

“People in government use guns to kill the most people by far. Surely that’s something to keep in mind when talking about gun control.”

After that tragic school shooting, it was time for, like, a national conversation about guns or something. Enough is enough, right? It was time to DO something. You have to draw the line somewhere. And what about the kids? After all, if we can save just one kid”even a really bratty and insufferable one”isn”t it all worth it?  We need gun control now to save the kids, or at least the ones we didn”t abort.

And so began a predictably ridiculous month-long national dialogue about guns, all of it contentious and most of it retarded.

Michael Moore pulled a juicy Buffalo hot wing out of his mouth to announce that it’s only white people who want guns, and only to kill nonwhites, yet a cursory review of recent spree killings would indicate that some of the more high-profile mass shootings were more likely motivated by a hatred for schoolchildren, Batman fans, infidels, and, well, white people.

If it’s true that guns are only for killing, then why does the US military need so many guns? And if the government’s role is to protect the kids, why the hell has its drones killed 176 kids in Pakistan?

It’s nearly impossible to sift through the blizzard of facts and statistics that both sides (AKA, the NRA and the Pentagon) cherry-pick to throw at the casual gun-control researcher. We do know that most American gun deaths are suicides. We know that a high quotient of gun homicides are gang-related. We know that rural areas have more guns yet less gun crime, while urban areas with strict gun-control laws tend to have relatively high rates of gun violence. We also know that over the past twenty years, gun violence has gone down while gun ownership has gone up.