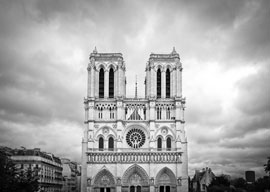 I estimate that a crowd of 1,400,000 gathered in Paris on May 26 for a rally in favor of traditional families and against France’s newly enacted legal extension of civil marriage to same-sex couples. The number attending the rally has been a controversial sticking point in both the French and English mainstream media.

In the English-language news outlets we had estimates from FRANCE 24 of “Tens of thousands,” but oddly the same source later estimated 340,000. New York magazine put in an understated 150,000 and UPI played it safe by attributing to sources estimates of “150,000 to 1 million people….” Reuters left it at “Several hundred thousand.” The New York Times merely quoted the police estimate of 150,000.

French sources are cattier on the numbers, with Le Point putting the estimate at 100,000 but covering their nether-brains by referring to everyone’s low estimations (the police, opposition spokesheads, etc.) and then making the 1.4-million figure appear ridiculous in contrast.

“Here in France, it will be remembered as the last time a president ignored 1.4 million people taking to the streets.”

Crowd counting is not for the armchair statistician and has a lot more variance than most folks are willing to accept as normal and expected. Nope, you have to get in and swim with the sign-wavers and then get your distance and start doing some scaling to even approach a real figure.

I was both in the middle of the rally and off to one side. I walked along with some nice folks and chatted amiably, listened to some banal slogan-chanting, helped a few folks with some directions, and basically had a long pleasant walk. I walked past a ghostly silent Assemblee nationale (which shamelessly meets in the Bourbon Palace), across the bridge to the Place de la Concorde (where Louis XVI was guillotined), and then caught a Metro to the outer reaches of Paris where I could catch a regional train home.

So why do I come up with 1.4 million? Well, the photographic evidence from participants is pretty impressive, especially this one which merely documents a small section of the column of people marching to the rally sight. That’s not the rally; those are folks walking on an avenue to the rally five kilometers away. On May 26 the entire five kilometers of the avenue looked like that photo.

My white straight ass also was in Washington, DC for the Million Man March and the March on Washington for Lesbian, Gay, and Bi Equal Rights and Liberation, and my own worm’s-eye view from being an observer in these three events is that the May 26 event in Paris drew the most participants by far.

The trouble is, nowadays “official” counts from interested parties such as the police, opposition talking heads, and government spokeszombies quickly can be countered in the blogosphere by dispassionate technology such as real-time maps with heat maps over them. For the March 24, 2013 rally against gay marriage, the heat-map photo made fools of the police estimates of the crowd (100,000…yeah, sure), and an analysis by a Belgian photo lab said that police and news source release photos of the event had been doctored to remove people and create an impression of sparse attendance.

The May 26 rally dwarfed the March 24 event, so if March 24 had hundreds of thousands, the one on May 26 had a million easy.

The rally may be historical in a variety of ways. I’m betting that it will be recorded as the last major rally where anyone argued about crowd attendance, because the smartphones tell the story and the technology records the truth. The recording devices, servers, and software that aggregate the counting are too dispersed for anyone outside the NSA to suppress.

Here in France, it will be remembered as the last time a president ignored 1.4 million people taking to the streets. He may keep his head, but he won’t keep his credibility. I am not so certain he will be able to keep his job.