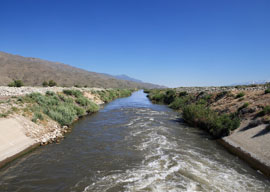 The ongoing Oroville Dam crisis has received modest national attention, in part because the press hasn”t figured out how to blame it on Trump. Moreover, attributing the surfeit of water to global warming, the only other respectable choice, seems inane.

But the history of California water projects is worth considering in some depth. The struggles over California infrastructure”not only physical edifices but also the tremendously influential 1974 movie Chinatown“have played a central role in some of the bigger changes in public and elite attitudes.

California led the way into big-government modernism by building dams for the masses, then into postmodernist disdain for the palpable. The main constant has been that everything gets more expensive.

Without massive infrastructure to store and move water, California (current population: 39 million) wouldn”t support a sizable population. In 1846, the number of Spanish-speakers in Alta California was likely under 10,000.

Enterprising American settlers quickly began to exploit the ample water that falls, erratically, on the mountains of the northern half of the state. Eventually, this led to the beginnings of a backlash: The city of San Francisco damming and inundating the magnificent Hetch-Hetchy Valley in Yosemite National Park was key to the rise of the Sierra Club in the early 1900s.

The Browns, father and son, have governed California, off and on, since the 1950s. Together, they comprise striking evidence that something fundamental changed around 1968.

In the 1970s, Jerry, in contrast, exuded a stylish Zen aura that constructing physical things was in bad taste. Jerry went on to win Democratic presidential primaries in three different decades, so this evidently wasn”t a wholly idiosyncratic emotion.

“The struggles over California infrastructure have played a central role in some of the bigger changes in public and elite attitudes.”

The sense that a sizable portion of upper-middle-class Americans are psychologically averse to the idea of anybody being paid a middle-class income for working with their hands deserves more inquiry. You can perhaps see it first emerge in presidential politics with the 1950s enthusiasm for Adlai Stevenson, and reach a peak with the ethereal, uninvolved Barack Obama. Some of the current mania of hate directed at Trump is due to his Pat Brown-like assumption that part of the duty of a leader is to come up with tangible structures for blue-collar men to erect. (Interestingly, California’s prince of the virtual, Mark Zuckerberg, appears to be testing the waters for a presidential run.)

Thus, out of Wikipedia’s long list of California dams, I can find only one new dam constructed in the 21st century (along with one expansion).

Another reason for the decline in dam building has been simply diminishing marginal returns. The New Deal-era Shasta Dam, which impounds the largest reservoir in California, was an excellent site, while Oroville, which was finished in 1968, was less optimal. California’s Auburn Dam, which was abandoned in the 1980s over earthquake fears after years of lollygagging, was worse.

Diminishing returns from exploiting environmental opportunities means it doesn”t pay for the country to increase population forever. Liberals used to understand that before they became addicted to immigration to win elections.

I”ve long been interested in understanding the major shift in the zeitgeist over roughly 1965″75. The 1974 movie Chinatown, starring Jack Nicholson, Faye Dunaway, and John Huston, exemplified a historic evolution in cynicism about public works. Chinatown‘s influence is usually attributed to Vietnam and Watergate, but it’s worth noting that its subject matter, California water infrastructure, was rightly due a skeptical look.

Robert Towne’s screenplay for Chinatown heavily fictionalized the story of the Owens Valley aqueduct that made possible the development of my hometown, the San Fernando Valley in northwest Los Angeles. But it also got right certain truths that were newly popular at the time.

Although Chinatown was assumed to be a liberal movie, much of the appeal was nostalgic. Set in 1937, it showed how beautiful Southern California had been before the population exploded and smog set in around 1943.

Ironically, I live a few blocks from the huge water main that William Mulholland, portrayed in Chinatown as Hollis Mulwray, the honest civil engineer, laid across the Valley in 1914 to bring Owens Valley water. Mulholland got it built in about a year using mules and men swinging picks. It has worked quite well, but in this century the pipe intermittently springs geysers and likely wouldn”t survive the next major earthquake.

So the Department of Water and Power has been laying a replacement water main in parallel to Mulholland’s. Yet despite a profusion of immense earthmoving machines, they”ve been puttering away on the project since 2008.

How did Mulholland get vast projects built so fast a century ago?

For one thing, it was quicker to dig in virgin dirt than in urban soil that’s full of gas mains and the like.

For another, Mulholland didn”t know everything he ought to be worried about. He built the Hollywood Reservoir under the “Hollywoodland” sign in only eighteen months in the early 1920s. But when he followed it up with the identical St. Francis Dam in the northern exurbs, it collapsed in 1928, killing about 600 people. Mulholland was emotionally broken by feelings of guilt. (His character in Chinatown turns investigator into the profit machinations behind the water plans.)

Today we know a lot more about what can go wrong, so we budget more time and money toward preventing mishaps than in Mulholland’s heroic era.

Big construction projects used to be cheap in part because they came with a lot of externalities that weren”t in the formal budget. Eventually, somebody wound up paying, but it often wasn”t the person who would profit.

Consider, for instance, worker safety. At Nevada’s Hoover Dam in the early 1930s, construction workers were often killed by falling rocks. So workers started making their own hard hats.

Eventually construction companies started paying for hard hats. That’s a great idea overall, although it adds to the nominal cost of the project. Today, far more of these safety and environmental costs that once wound up being borne by workers or neighbors go into the formal budget.

Towne rightly understood that the motivation behind many public works is to socialize cost while privatizing profits. In particular, well-connected string-pullers tend to be good at offloading the externalities from their machinations, such as higher risk, onto the public.

To take a dam-related example from the 19th century of the history that Towne tapped, the wealthy steel men who invested in the hunting and fishing club that owned the dam that failed in 1889 and wiped out Johnstown, Penn., killing over 2,200, escaped financial liability. This injustice led to a public outcry and evolution toward a system of stricter legal liability.

Following the 1928 failure of Mulholland’s St. Francis Dam, in the mid-20th century the American leadership class racked up an impressive string of decades without a major dam disaster despite undertaking many ambitious plans, such as Hoover and Grand Coulee.

Was this just a lucky streak or did they earn the public trust?