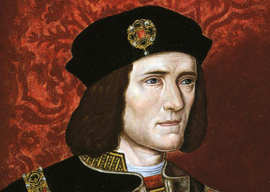 On February 4th, the University of Leicester announced that the bones unearthed last August beneath a former parking lot in Leicester really were what had been hoped”the remains of King Richard III”and the audience of journalists burst into spontaneous applause. A 527-year-old mystery had been solved in the mud beneath the most prosaic of possible sites.

Despite current egalitarianism, the term “king” retains a resonance that will never pertain to “president” or “prime minister.” We are catapulted romantically into the ancient world and etymologically into Anglo-Saxon England. Even the journalists” applause was reminiscent of the shouts of acclamation with which English kings were once crowned. Any royal remains would have been exciting, but when they are those of “Crookback Dick,” last of the Plantagenets, last of the Yorkists, the last medieval monarch, the last English king to die in battle, and the one with the foulest reputation”it captures all imaginations. Just as Leicester is central to English geography, so Richard is central to English history.

“A 527-year-old mystery had been solved in the mud beneath the most prosaic of possible sites.”

Richard was killed at Bosworth, eleven miles west of Leicester, on August 22nd, 1485 at age 32. Although the Wars of the Roses would limp on for two more years, Bosworth was the decisive engagement, and when Lord Stanley ordered his reserves to attack Richard’s troops rather than those of Henry Tudor, it ushered in the modern age. As he sat astride his charger looking down on the arena from Ambion Hill, Richard must have realized that his cause was hanging on a knife’s edge. According to tradition, he then saw Henry’s thinly protected red dragon banner less than a mile away and charged with eighty loyal Northerners, personally killing Henry’s standard-bearer before being hewn down. Had he managed to kill Henry, we would almost certainly remember him more kindly, and he would probably have long lain in magnificence at Westminster rather than under tarmac in Leicester.

His dead body was stripped, a halter was placed around his neck, and he was tied to a packhorse and taken to Leicester, where he lay exposed for two days before being buried in Greyfriars church. The tomb and its church were then pulled down by Henry VII’s son during his Dissolution of the Monasteries”and until last August, it had been thought that Richard’s bones had probably been precipitated into the River Soar.

Richard had reigned for just over two years, clearing his way to the throne in a welter of intrigue and violence. In April 1483, Richard’s brother Edward IV died, leaving the throne to his 12-year-old son Edward. Richard was declared Protector, and he brought Edward to the Tower of London, then a royal residence. Then Richard claimed to have discovered an assassination plot against himself, and he arrested four members of the King’s Council, executing one the same day. Three days later, he had Edward’s nine-year-old brother Richard also placed in the Tower of London.