Unfit to a T 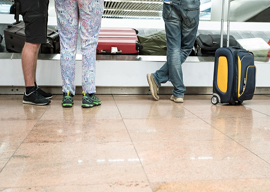 Sitting in two airports last week, in Paris and Riga, it suddenly occurred to me that I had not seen a single person who was smartly, let alone elegantly, dressed (I do not exclude myself from this stricture; I have never been elegant in my life). Indeed, if there is one thing that unites mankind today it is casual slobbery in dress.

This is rather odd, considering that so many people seem to spend a lot of their spare time shopping for clothes. The fact is, though, that however much time they spend on shopping, they will always look just as much a mess as ever. They choose, but they do not discriminate.

Our unwillingness, and increasing inability, to dress elegantly represents the triumph of self-esteem over self-respect. We dress to please ourselves, not others, and not looking like a slob takes effort, especially keeping it up through the day. Convenience is all, and it is easier to throw on a few casual clothes than to dress well. Again, I do not exclude myself from these strictures: When I wake in the morning, my heart sinks at the prospect of having to get ready for the day. Even tying my laces, for the n thousandth time in my life, seems a task at once gargantuan and meaningless. I find some slip-on shoes instead.

Watching the people passing by their hundreds or thousands, certain observations more or less forced themselves on my consciousness.

The first was the way in which enormously fat people tended to squeeze themselves into tight clothes, revealing the semifluid nature of their abdominal apron. I am far from decrying fat people in themselves; they exhibit the same range of human characteristics as any other large group of people, and gluttony seems to me the least of the seven deadly sins, not to be compared to envy or pride, for example. Indeed, it seems to me more of a failing than a sin.

“I have never wanted to turn myself into a walking free advertisement for large companies.”

It is not the obesity in itself, then, that offends me, but the egotism and lack of acknowledgment that it requires a way of dressing, and indeed of deportment, different from those of slimmer bodily shape. On the contrary, the way these fat people dress seems to say to the world, “I know that I look grotesque in these clothes, but what has it to do with you? Keep your opinions to yourself—there is no law against fat people wearing lime-green or lemon-yellow shorts that cling to their thighs like lichen to tree trunks.” And, of course, whatever there is no law against is permissible in every other sense, since the law is a complete guide to morality, manners, and etiquette.

I was intrigued also by the T-shirts worn by the obese and the asthenic alike. They seemed to fall into several natural categories. The least interesting were the plain-colored without any words or pictures on them. They were dull and dowdy no matter how appalling or tastelessly luminous their shade.

Next were those with the names of places on them: Padua, Moscow, Barcelona, as if these cities were honored in some way by being associated with the wearers.

Third came those with animals, ranging from tyrannosaurs (usually worn by people who resembled brontosaurs with baseball caps worn backwards more than the fiercer kinds of dinosaur) to turtles, lions, and teddy bears.

Fourth were the walking advertisements for some product or other, such as Calvin Klein jeans or Jack Jones handmade goods. I believe in commerce as an important part of human life, but I have never wanted to turn myself into a walking free advertisement for large companies.

Fifth were the T-shirts with cryptic messages, usually of an arch humor. Thus a young man had a black T-shirt with white lettering saying “Lost in Space.” As he appeared glued to his telephone and oblivious of the world around him, this was, in a way, appropriate. And I suppose that a very fat man with the words “Running Cult Member” might charitably have been interpreted as commenting ironically on himself.

A young Chinese boy, aged about 5, wore a T-shirt with the caption or slogan “Hot Hope Robot.” Did this reflect his parents’ aspiration for him (it could hardly have been his own)? But what parent would hope that his or her child would develop into a robot of whatever temperature? Or was this a subtly subversive commentary on the fate of so many people in China who work like automata in mind-numbing jobs (which is nevertheless better than the alternative)?

Finally, there are those T-shirts that espouse a cause, supposedly a good cause. For example, there was a young woman of university age who wore a T-shirt inscribed with the words “Peace Is Cheaper.” Maybe it was my imagination, but she looked pretty pleased with herself, parading around in this T-shirt as if doing so were helping to bring about an end to the North-South divide in Korea. I daresay that if asked, she would have said that she knew that the effect of her T-shirt was minimal, and that for peace to come about, many millions of people would have to wear this T-shirt rather than just one person. But building peace, like building nations, had to start somewhere, and better to wear a T-shirt than drop a bomb.

There is a smugness in this that ought to be a criminal offense, namely the advertisement of one’s virtue by means of a T-shirt. In my penal code, anyone found guilty of this offense would be sentenced to two weeks of cleaning public lavatories, or twice as long if proved to be of bad character.

I have one final observation: To judge from the people in the airports, the elderly dress with no more dignity than the young. The explanation for this, I suppose, is that those who were young adults in 1968 have never recovered from their adolescence or realized or accepted that it is now over.

But I don’t want to sound myself like a grumpy old man. Not everything in the modern world is bad. I had some excellent udon soup in a Japanese restaurant in Riga Airport, which proves that there is such a thing as progress after all. The last time I was in Riga it was still Soviet. There was no question of udon soup in those days, to put it mildly.